Certainly not when it comes to colors and genetics, but how can someone say this horse... 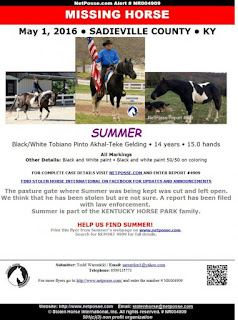 is the same breed as this one? 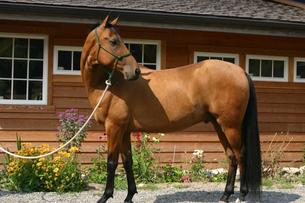 Now, let me start by saying, it's a shame the first horse is missing and I hope he's recovered soon.  Too many horses are disappearing these days and some have been found after it's too late.  I don't want his disappearance to get overshadowed by the fact that I'm questioning how they can say he is an Akhal Teke.  He is built wrong.  Akhal Tekes are known for their slenderness.  Some are just down-right skinny 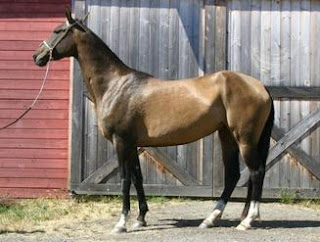 but that's how the breed is.  I believe the KHP does have one, but I believe he lives on-sight and I get the impression the missing one is from a private farm.  So tell me, people.  Can the missing horse be an Akhal Teke?  Is it just a more stockier example of the breed?  If I had to hazard a guess, I'd say he was a stock horse of some sort.  Or a cross of something.  He just seems to be too square to be an Akhal Teke.  His head is proportionate to the rest of his body.  He has a thick neck.  Two things not characteristic of the AT.    Not to mention Akhal Tekes don't seem to come in Tobiano.    Sabino and Rabicano markings have been seen in some, but not anything flashy like the horse in the flyer.

At any rate, I really hope they find this guy soon.  I'm sure his people are worried about his welfare.

Speaking of welfare...yesterday some wild animals celebrated two victories.  The State Senate past SB2340, which helps protect the Salt River Wild Horses and it now goes to the governor to be signed into law.  This law would help protect the herd and develop a management program to reduce the breeding of them.  Right now they breed whenever they want and however often they want so any time of year you might see a foal or two.  It's not something that will protect them 100% yet, but it's pretty darn close.  Yesterday was also the day the Maricopa County Board of Supervisors voted unanimously to grant the Southwest Wildlife Conservation Center a Special Use permit that would allow them to continue to give public tours.  A few months ago, a man who moved into the neighborhood in 2012 filed a lawsuit against the facility stating they were operating a zoo illegally and he wanted them to stop giving tours or the county needed to PAVE the dirt road that leads to his house.  ALL of the roads out there are dirt.  He also wanted the facility to get rid of the coyotes and wolves they have because they howled and disturbed his peace and quiet.  He doesn't even live there full time!  Anyway, SWCC is an official part of the Grey Wolf reintroduction program and they have a fairly decent number of wolves on-site that are valuable to the population.  Fortunately, he was just one person against the center AND the other neighbors.  It was actually one of their neighbors that started the petition to get the special use permit.  The center has been there for more than 20 years and should not be forced out because of one person.  But apparently he dropped his lawsuit against the facility and, as I mentioned earlier, the Board of Supervisors voted to give them the permit.  The guy, who is a dentist or doctor or something, now has 15 days to appeal this decision, but he dropped the lawsuit so why would he file an appeal?  Hopefully he saw he was up against  a whole bunch of support for the facility and knew he couldn't win.  I don't know.  But for now, much of Arizona (and beyond since this reached all around the world) is rejoicing that SWCC can continue doing what they do best and that is to rescue injured or orphaned animals, nurse them back to health then release them back into the wild.  HURRAY!

Well, that's it for now.  I hope everyone has a great weekend.