New issue of JAH/Just About Horses and other stuff...

So, yesterday I got an email from Reeves/Breyer telling me that the new issue of JAH would be shipping soon and to make sure my address was correct.  I saw the email on my cell phone so I didn't really pay much attention other than to think "Cool".  Then I went on Blab and saw they were talking about it and were referring to how neat the cover looked.  Huh?  I hadn't seen any cover picture.  So I went back to my email and looked.  It's pretty darn cool, if you ask me! 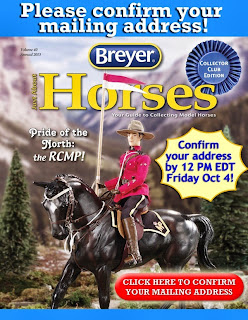 The model is the new RCMP on Big Ben, which is really cool.  I have a personal connection to police horses so I'm glad they released Trooper (a retired Canadian police horse) and now this one.  Unfortunately, the doll and tack don't come with the model and I think that's a shame since it makes the whole thing look so much better.  I'm surprised they didn't think to release it as a whole set-up like they did with the Queen's Guard.  They could make much more money because they could charge a higher price.  Anyway, I'm looking forward to getting the magazine to see what other goodies it holds.  I will then be sending it and last year's issue to a blabber in California who isn't a member of the Collector Club.  She wants to pay for shipping, but we'll see.  It won't cost all that much to ship and so I want to just give it to her.  I don't know when the magazine will arrive so we have time to sort that all out.

So, recently I found out that the Southern Nevada Zoological Park (aka Las Vegas Zoo) had closed its doors for good after its 3 keepers resigned. 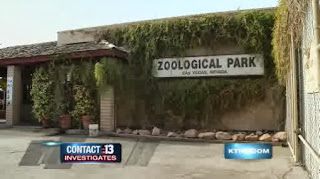 The owner is a retired Las Vegas Metropolitan police officer and apparently didn't give the keepers what they needed to adequately care for the animals.  The USDA tried to inspect the facility recently and the owner wouldn't let them in.  Said they needed a warrant to inspect the facility.  Uhm.  No.  If you're an animal facility you can be inspected without a warrant.  Come on.  I'm sure it wouldn't have been hard to get one with the cooperation of the former employees, but they were able to still close the place down.  I've been there before and it's not a good place.  There were chickens and pigeons EVERYWHERE.  They outnumbered the regular zoo animals.  It was a rather sad place, really, and I'm not at all disappointed the place closed.  Unfortunately, several animals died after it shut down due to stress and no food or adequate care.  The remaining animals have all been sent or are waiting to be sent to other facilities, including this guy... 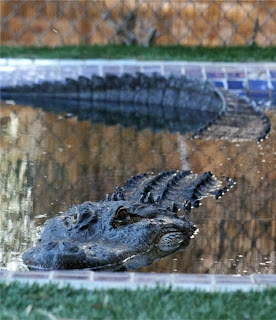 His name is Sweetness (after Walter Payton of Chicago Bears fame) and he's an American Alligator.  He was rescued by the Phoenix Herpetological Society in Scottsdale, AZ.  Unfortunately he won't be staying.  He'll hang out here for a few weeks then be moved on to a facility in South Carolina.  I'm bummed about that, but I'll get over it.  Apparently the LV Zoo's otter went to Bearizona in Williams, AZ and an animal went to the Phoenix Zoo, but PHS didn't say which animal went there.  I know it wasn't the lion Maniac Girl since she went to the Lion Habitat Ranch in Henderson, NV and the Phoenix Zoo doesn't house Barbary Apes or Binturongs or Fossas.   Maybe it'll be mentioned on Facebook.

Back to horses...I don't spend much time around training stables so I don't know if this is really the norm or not, but it definitely is out there, in my opinion.  A couple of months ago a young American rider went to Germany in search of a horse.  She found one and spent a couple of months in Germany while they got to know each other.  The horse then was imported to the United States where she now lives at the training facility of a well-known Dressage rider, which is where the young rider trains in hopes of making the next Olympics.  At the very least she's aiming for the Pan American Games in 2015.  Anyway, in reading her Twitter page I encountered this picture 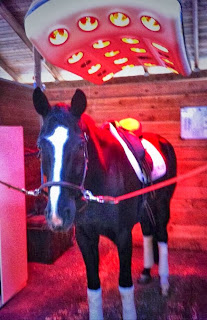 Yes, folks, you are seeing correctly.  A horse standing under a heat lamp.  Yes, it does get a little chilly in San Diego County in the morning, but not chilly enough to warrant a heat lamp.  And certainly not on the day this was taken!   I get cold easily and all the times I've been to San Diego never once did I wish I had a huge heat lamp hanging above me.  Hahaha.    I wonder if the horse had a heat lamp in Germany, where it DOES get really cold...and snows!  Who knows?  But she's definitely a pampered equine now.

Well, I guess I'd better get to work.