Although with a name like Bonne Fete (Happy Birthday in French), he would be better as a special for the Big Easy Bash with their Mardi Gras theme than Breyerfest, but boy am I glad he's not.  This is a definite MUST HAVE that I will HAVE to find a pick-up for.  Are you ready?  Are you sure?  Okay.  Hold onto your hat... 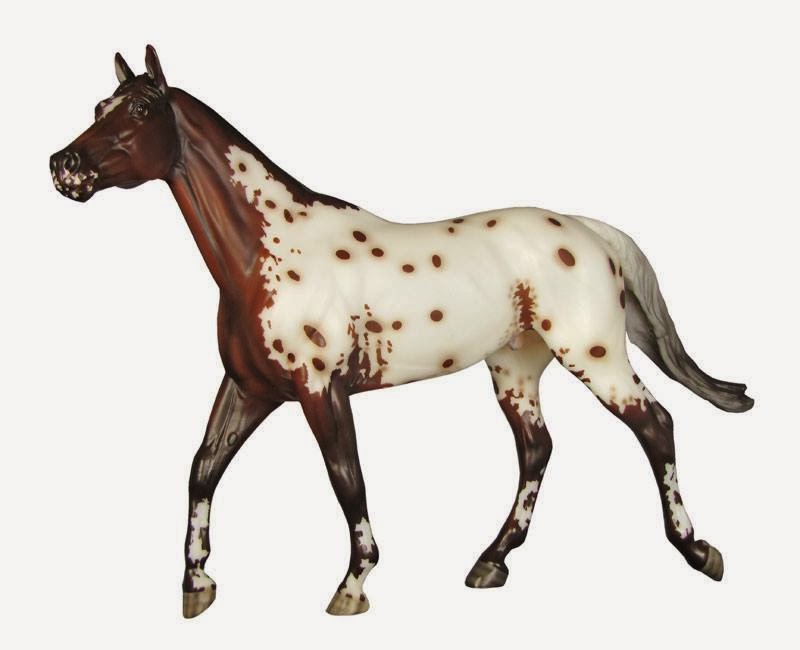 I LOVE this one.  I MUST HAVE this one!  But since I'm not going to Breyerfest I must now find someone to do a pick-up for me.  It shouldn't be too hard since there's always ads on MHB and MH$P from people offering to do pick-ups, but considering the paint job on this guy, he's going to be popular.  AAAAA.  I MUST have this horse.  Wow.

Now that I look at him, though, I wonder if he's supposed to be Silver Bay and that's why he's part of Breyerfest and their Silver Anniversary.  I can't see too much of the mane, but the tail makes it look like he can be a Silver Bay.  It doesn't matter, though.  I must have him!  Oh, did I say that already?  hahaha.

I went to Blab to see if anyone was talking about him and was about to start a thread about him when I decided to check the one about BF exclusive models and saw that they were.  Boy am I glad I looked.  I always feel bad for the people who start a thread about something and someone tells them there's already another one on the same or similar subject.  Like, the bread about the exclusive model thread and someone else started one about a specific model.  Another person said they were already talking about the model on the other thread.  I just want to say "So what?"  The new thread was about a specific model, not all of them.  Oh well.  Anyway, back to this new SR tent special...apparently some people think the mold looks wonky.  I don't know the specifics behind it.  To me the Big Easy Bash one looks wonky, but that's only because of the face markings.  I don't think Bonne Fete looks all that wonky, but I may be blinded by the cool paint job.  I have hopefully found someone to do a pick-up for me, but we'll see.  I'm keeping my fingers crossed.  She said she did pick-ups for someone in Oregon last year and asked her for a list of her three favorites.  Well, this is really the only one I want so then what?  I dunno.

Yesterday we had pet drama going on and my mom asked if I could get off work early to help her take care of it.  She asked that I call her and let her know so she could make the vet appointment.  Well, when I called to let her know I'd be home an hour early like she'd asked me to, she asked if I'd gotten my brother's text.  I said no and she said that he'd made the appointment for 10am so I didn't need to come home early after-all.  Well, I'd already gotten the time off so I decided to go do an afternoon horse hunt.  All the times I've seen them it's been earlier in the day...before 10am...but figured it wouldn't hurt to try later in the day.  Besides, I needed time to myself and wasn't ready to go home and face Curley being gone.  After 15 years it's not easy.  Well, I didn't see any horses, but I didn't really expect to.  I was bummed for sure, but I try to look at it this way...if I don't see them every time I go looking it makes me appreciate them more when I do see them.  I don't want to take for granted that they're always there to see whenever I want.  It would be nice if they were, but I'm glad they aren't.

Well, I hope everyone has a great weekend!