I don't buy things all that often on eBay. It comes in spurts and has no rhyme or reason for when I decide to look for something. A couple of weeks ago I decided to look for cat themed Bento Boxes and when I saw this one, I had to have it 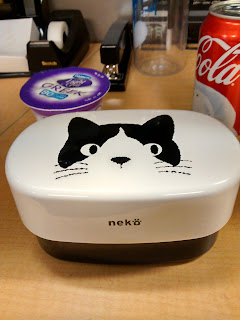 One of the problems, though, was that the auction wasn't due to end for another 6 days since it was a new listing. So I made a mental note of when it was going to end and when it came close to that time, I decided how much I was willing to spend and I made my bid...and won! Hurray! Next came the 2nd "problem"...it was shipping from Japan so I had to wait for close to two weeks for it to get here, but it finally did on Friday and I used it for the first time yesterday. I think it's super cute and I look forward to using it more often. I will hopefully get to go to the San Francisco area next summer for the opening of Fresno Chaffee Zoo's new Africa exhibit and finally I'll get to visit stores that have a bunch of Bento stuff. I've been to ones in San Diego and Los Angeles area, but they didn't have much. There's stores in the Bay Area that have TONS of boxes and assorted supplies. I can't wait.

Anyway, over the weekend I was browsing eBay again in search of potentially adding some Stablemates to my congas. I was quite surprised when I went to the main page on Saturday and saw this

eBay is a world-wide site so I was surprised to see something on it from Arizona. And not even Phoenix. The Round-Up drive in was in Scottsdale. I remember going there once or twice, but mostly we went to the Scottsdale 6 Drive In. I come from a generation where drive ins were more common than indoor theaters and sadly not many drive ins exist. The Round-Up closed many years ago and the Scottsdale 6 closed 2 years ago. The buildings and movie screens are still there, but they're dark. I haven't seen a movie at a drive in for more than 20 years, but I have fond memories of the times we went. I saw the Black Stallion at the Scottsdale 6, but more often than not my brother and I would end up falling asleep in the back of the van we had at the time.

Back to the stablemates...I ended up finding 3 being sold by the same person and they were molds I conga so I put a G2 Appaloosa and a G2 Clydesdale in my cart then sent a 'best offer' for the other G2 Appaloosa I wanted. That one was a bit scuffed up and I didn't think it was worth what she was asking so I offered a little less (more?) than half. I always get that mixed up which word should be used. She had it at a price and my offer was half plus a dollar. Anyway, she accepted the offer and sent me an invoice with the total then mailed it yesterday. This package I didn't have to wait near as long for because she lived in Phoenix! She mailed it Monday and I got it Tuesday. Hurray! 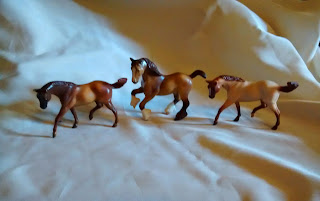 The Flicka model, which is on the far left, is the one that was described as having a few marks on it due to being played with, but I think she didn't quite accurately describe the condition, but I didn't complain because it was inexpensive and it wasn't a huge deal. I don't show or anything so I wasn't looking for LSQ or even PSQ models. And I've been wanting the Flicka model anyway so I don't care. I'm going to have to do some rearranging now, though, because there isn't any room for the 3 new ones to be displayed with their respective congas.

We've been getting some pretty good storms the past few days. Yesterday the sun was shining then all of a sudden it got super dark and was raining. Then the sun came out again, but a short while later it got dark and rainy again. It was crazy. And for a short time they had to close one of the two roads that lead in and out of my business because of flooding. Luckily, the road reopened before it was time to leave for the day. Then last night, about 8:00 or so, it started pouring again and there was quite a bit of thunder. The fire department had to do some water rescues yesterday. I wonder how many of them will be charged with the Stupid Motorist Law...what that is, is anyone who goes around a marked road block warning people of flooding ahead or that the road is closed during flooding, if they get stuck and the fire department has to come and get them out, they are fined. I don't know what the fine is, but I imagine that combined with being shown on the news is likely enough to make you think twice before doing it again. Surprisingly, knowing about the law and seeing other water rescues on the news doesn't keep people from driving through flooded washes. Complete idiots, they are. I don't care if you want to risk your life and damage your vehicle by doing that, but you put the lives of the firefighters at risk when they have to come pull your stupid ass out of the water.

Well, I guess that's it for now! Happy Wednesday!