I LOVE San Diego.  It's easily my favorite place to visit when I have a few dollars in my wallet.  It has fog and the beach and a couple of really neat zoos.  What's not to like about it?  There's a beach down near the border where you can even go horseback riding.  Almost 2 years ago I was there in December and went down to the Border Field State Park because that stretch of beach was new to me plus I'd always wanted to see the border fence.  As I was leaving, I saw an unusual-looking horse
so I had to stop and find out what breed he was.  Turns out I was seeing my very first Gypsy Vanner.  I was quite excited.  And while it may look like he's about to let one drop, he was actually just swishing his tail.  His person was very nice and trying to get him to pose for my camera when I asked if I could take his picture, but he didn't want to cooperate.  Turns out there's quite a few Gypsy owners in the San Diego area and she said a bunch of them were gathering that day for a ride on the beach.  Unfortunately, I didn't really have time to stick around and wait to see more and left, but it left quite an impression on me as far as the breed goes.  Also with this woman was her daughter with a Thoroughbred named Bear.  He looked a little thin to me, but I don't know a whole lot about TBs so maybe this is how they're supposed to look...
So the other day I was looking around for some pictures to use as motivation to get into riding shape when I found a rather unusual one 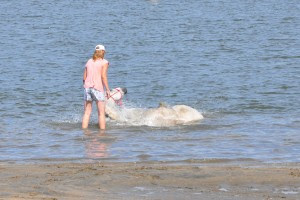 After some exploring I discovered this picture was taken off the "beach" of Fiesta Island, which is near Sea World 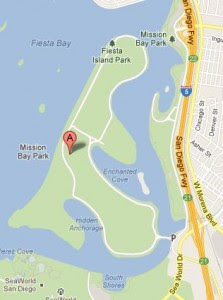 While I've been to the area many times, I've never actually been to Fiesta Island.  I knew there was a dog park there, but not that you were allowed to ride your horse around the "island" and into the bay. 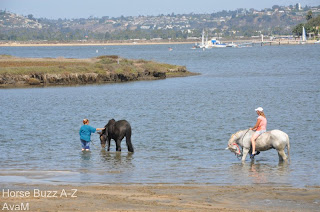 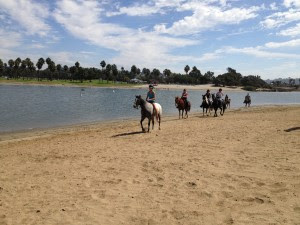 It's pretty neat.  Next time I go to San Diego I'll have to go check out Fiesta Island.  My luck there won't be any people riding when I go, but at the very least it'll be a different photography perspective for me and that's always a plus.

Breyer has released the fourth model in their Greek Mythology series.  This one is called Dionysus and is on the Ethereal mold.  Of the four they've now had, this is my least favorite 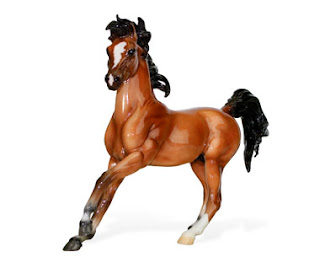 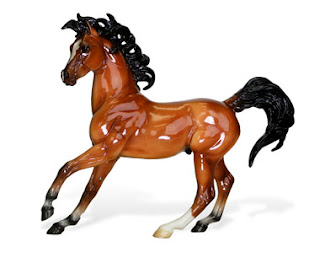 I like the color, but the rest of it kind of bugs me.  Especially the mane.  The holes look weird to me.  hahaha.  Anyway, I'm going to enter for it, but I'll let a Blab friend have it if I win.  Originally I was going to see if I could trade it for a Mother Lode Lady Phase or one of the two Idocus models I want (Idocus, Camelot and Valiant), but I can't afford to buy him then hope someone is willing to trade.  So I'll enter for people who really want him and want to increase their chances or they aren't a member of the Collector Club.  Hopefully the 5th one will be something I like and I"ll have the money to get it.  And hopefully I'll get picked.  I haven't had much success with these things, but I'll keep trying.  I may just enter the Premier Club next year, we'll see.

Well, I'd better get to work.  Not that I want to.  Tomorrow is July 4th and we have both tomorrow and Friday off (plus the standard weekend) so most of us don't want to work today.  hahaha.