A few months ago one of the people on Blab started a Facebook page to try to get Breyer to start a collector club for just Stablemates.  Last I saw, there were more than 300 members, but it wasn't very active.  The person has been in touch, off and on, with someone at Breyer to keep her updated on our numbers to show Breyer that there really was enough interest to have a club.  Fast Forward to Saturday (or was it Sunday?) and a conversation on one of the bus trip during the Sweet Home Chicago event.  Someone asked the Breyer employee about the possibility of having a Stablemate Collector Club and all Breyer person would say was to keep an eye on social media for an announcement that would make Stablemate collectors very happy.

Today, it happened.  Not on social media and, in fact, it hasn't even been mentioned by Breyer yet, but someone got ahold of the new JAH issue that is about to be mailed out and there it was... 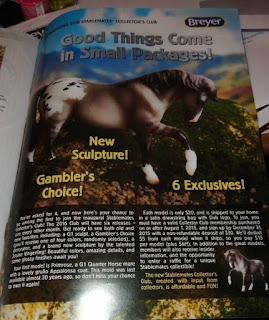 It looks like Breyer listened to us on a lot of things we wanted such as an affordable price, older molds, newer molds and drawstring bags like the big guys get.  It's very exciting and I'm looking forward to joining.  I will need to renew my Collector Club membership in order to join, but I'm due to renew in December anyway so I'll just do it sooner to make sure I don't miss out.  So far, I really like the looks of the first model (I believe it's the one in the picture) and am excited about getting it. It's an interesting color. I don't know when the first model will ship, but probably not until after the first of the year so there's still some waiting to be done, but that's okay since we know it's going to happen now rather than hope and speculation.

On the car front, I was able to pick mine up yesterday after work from the Progressive Service Center. They did a GREAT job on it and you can't even tell it was dented. Plus they gave it a good bath both outside AND inside. I'm quite impressed and would have no problem recommending the body shop to anyone who needs paint or body work done and lives in the Phoenix area (the shop is in Mesa). I'm just happy to have my car back, I tell you what! They told me not to wash it for 7 days, though, and we ended up getting hit with another monster storm last night. Strong wind and heavy rain. I was worried it would not only dirty my car back up, but also wash some of the paint away, but it did neither so I'm happy about that.

Well, I've been goofing off too much today already so I'd better get back to work. Until next time!
Posted by Brenda at 1:07 PM