Are there several CollectA horses that are almost identical to Breyers?  I was looking at someone else's blog and she was doing a walkaround of a couple of CollectA models and I spotted it right away so I went in search of a website for CollectA and found a couple of others that are almost identical to a Breyer model.  The only difference might be a slightly less tucked head or a leg moved a hair.  What do YOU think?  All of the photos are from IDYB and collecta.biz 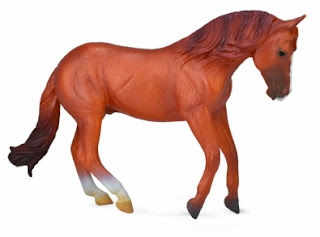 The first model is what they are calling an Australian Stock Horse Stallion.  Bring the head up just a touch and make a slight change to the swish in the tail and who do you have?  Latigo. 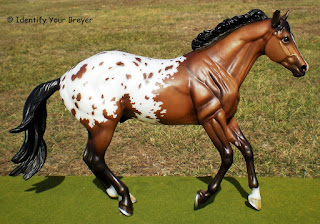 Next is what they are calling Lusitano Stallion... 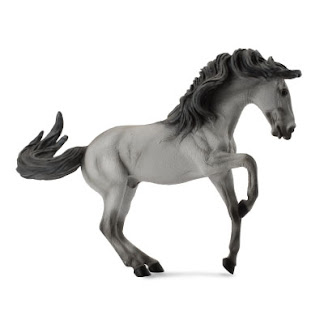 Again, change the head a bit and the swish of the tail and you have Croi Damsha.  Even the floppy lip. At this angle it's more noticeable on the CollectA, but if you flipped Croi around, the floppy lip would be evident 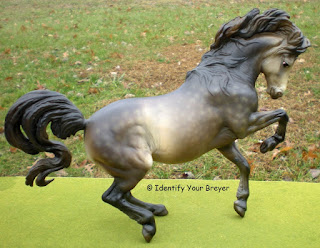 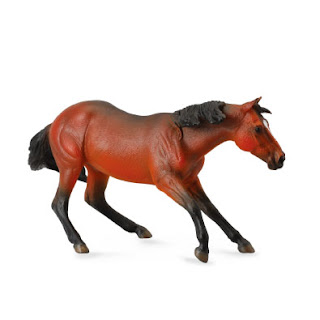 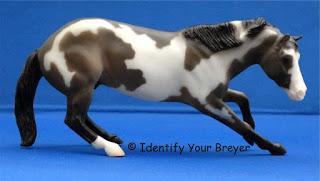 Those two are a little more different than the others with the forward leg being switched, but it's still pretty close.  Or maybe it's supposed to resemble the Traditional Bobby Jo...? 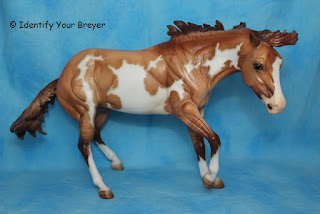 But considering Bobby Jo was brand new and only released last month, maybe not but the tail and foot placement is more like the CollectA one.

I'm sure there are others, but those were the most obvious to me.  I know imitation is the sincerest form of flattery, but when you're imitating something like a model horse from a well-known company, it borders on...just a tiny bit...copyright infringement.  They may have changed just enough characteristics to get away with it, but really, why not come up with your own unique designs?  Oh well.

Tuesday Breyer released for purchase the 2nd Collector Club special model Fabien.  He was first spotted at Breyerfest this year and has been much anticipated since then. 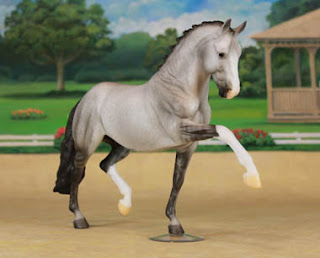 It's funny, though.  When a Blabber announced they'd discovered Fabien was available for purchase, a lot of people said they weren't going to buy him because they thought his dapples were horrible.  Fish scaley and too perfectly uniform.  The funny part is today, someone went to buy him and the website said he was sold out.  A call to Breyer confirmed he was currently unavailable due to them running out but more were on the way.  Finding out he wasn't currently available made him a hot commodity all-of-a-sudden.  I got my order in right away so now I just sit back and wait for him to arrive so he can join Totilas and Enchante on my shelf at work.

So far, it looks like 2016 is going to be an expensive year for me, model-wise.  I will be joining the new Stablemate Club and I will probably join the Vintage Club for the first time.  Only time will tell if I renew my Premier Club membership.  I really like the first model, but so far I haven't kept any of the 2015 models.  I wanted to keep the first one, but at the time I couldn't really afford to buy it so I sold the pair to someone else as I did with Bobby Jo, the 2nd model.  I don't know about the 3rd yet.  We've seen a picture of it in Just About Horses, but the angle was a bit odd so we don't really know what it looks like.  In addition to the clubs and the individual models that we already know will be released, Breyer will be having another Collector Event in 2016, plus there's Breyerfest, which promises a brand new mold for the Celebration Model.  I would really like to try to attend BF this year, but if the Collector Event ends up being closer to home and sounds like something I'd enjoy as far as activities, I will pick that one over BF.  The website says more information will be released later in the Fall.

Speaking of Fall, it is officially here.  According to the calendar, anyway.  In Arizona?  We are still firmly entrenched in Summer with 100+ degree temperatures.  The mornings are starting to feel a little cooler, but we still have a bit to go before the weather is comfortably cooler.

I hope y'all have a great weekend!