Well, Breyer has released another model in the Big Cat Series.  I think this one is the best one so far.  The mold they chose was a good fit for the cat 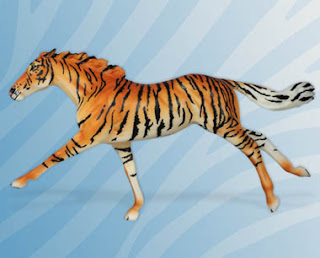 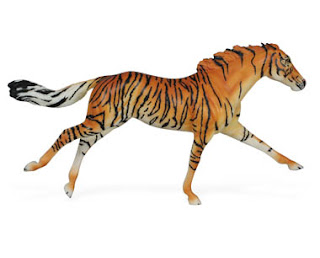 My only real gripe, other than the cost of $175, is that they painted completely different markings on each side of her face and real tigers have more similar ones.  They're not identical, but close enough that you'd think they were identical until you looked real close and saw the small differences.  What Breyer did is more than small differences 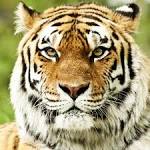 Oh well.  I don't plan on entering for her because I don't like the idea of model horses painted to look like big cats.  I wish they'd just done a series of big cat models that were the shape of the actual cats.  Does that make any sense?  Instead of a horse painted to look like a cat, just have the cat.  hahaha.  Oh well.  I still think they did a really good job on this one.

We had another little storm last night.  Some rain.  A little wind.  Nothing major.  I think our monsoon is giving us a good soaking at the last minute before it leaves until next June.  Now, if the temperatures would just come down some more.  On Saturday it was 107 and yesterday it was 103, I think.  I'm looking forward to when it's down below 100 degrees for longer than 2 seconds.  hahaha.

I'm still trying to find a Four Stars from the Sweet Home Chicago event over the weekend.  I had someone offer me hers, but since she'd bot it on the secondary market she'd already paid a mark-up and was offering it for the same price she paid.  I had to politely decline.  I'm not interested in paying more than twice the original cost.  And I'm not toally 100% sold on whether I like the paint job or not.  The body is nice, but the tail is what is bothering me.  I might see if I can find me a Ferris, though.  Who knows.