How much can model horse collectors take in one day?  Or even over a couple of days.  First it was the Stablemate Collectors Club on Tuesday.  Yesterday morning there was the unofficial release of the 2016 Vintage Collectors Club models, the 3rd (and final) model for the Premier Club and the reveal of the first model for 2016. PLUS...the reveal of what the first Collector Club exclusive model is going to be. 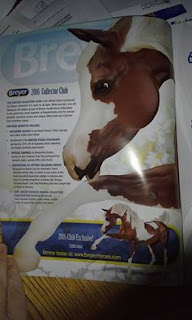 Fortunately it's not a mold I collect and it's not a required purchase to stay in the club so I don't plan on getting him.  Anyway, also "leaked" was another new model on the Wyatt mold. 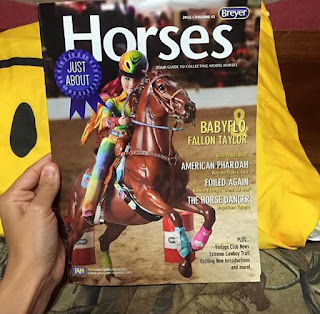 It's not known, yet, if he'll be a Special Run or a Regular Run but at least he's something that will be available, unlike the bay Carrick that was on the cover last year (or was it the year before?).  I also wonder if the tack is something that is being made for release as well.  There is no barrel racing sets out there for commercial purchase and this set looks pretty neat.  Jennifer Buxton of Braymere Saddlery designed the tack on both the 2013 and 2014 covers, but she hasn't said anything about 2015. But then again, because the magazine hasn't really been mailed out in large quantities yet, maybe she's not able to say anything. I guess we'll know soon enough. :)

Anyway, with all of yesterday's "reveals" (none are official yet since Breyer hasn't said anything), the best was yet to come. A "few" months ago we were told that a model was being made of the British dressage horse Valegro. We got a tiny preview of what he might look like when a picture of the sculptor was photographed next to the actual horse and she had the sculpture in her hands. Well, yesterday a photo was posted on Blab that someone had seen on Instagram, I think it was, and while it isn't official yet, we're pretty certain it's Valegro 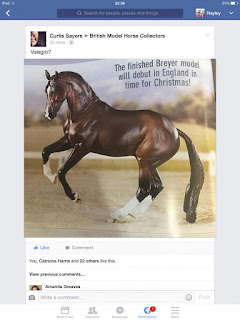 The pose is a Canter (or Cantering) Pirouette, although depending on who you ask on Blab, they'll correct you and say it's just a Canter. Bah. I've heard it called a Canter Pirouette on TV so you can take your unneccessary correction and stick it in your ear. hahahaha. I dislike it when people correct you like that and it comes across as know-it-all. She could've said "Actually, it's this not that" rather than say "It's not that, it's this". It's all in the way you word it that can make it seem less "You're ignorant and I know everything" Oh well. Anyway, I looked on Google and found a photo of Valegro in almost the same, exact pose so that kind of solidifies that the mold is him 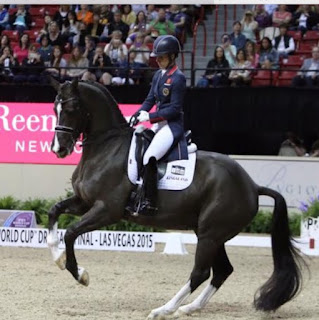 It's a really neat mold and they pretty much nailed the pose.  The model will be released in the UK first and then to the US.  I am really looking forward to getting one.  Gosh, 2016 is going to be such an expensive year.  I may as well just have my paychecks sent directly to Breyer.

Well, I'd better get to work.  I've goofed off way too much this week because of all the fun stuff that's been going on over at Blab.  Yesterday I told myself I was going to stay off the fun internet (some of our programs are internet based), but that quickly flew out the window and I'm not doing so well today staying off and it's only 7:14am.

Hope everyone has a great one!
Posted by Brenda at 7:15 AM