For the second time, Breyer Model Horses have done a special edition model for what are considered Flagship Stores.  I don't know what constitutes a dealer as a Flagship Store, but the place I get most of models at (and have been since the 1980s) is a Flagship Store so when I found out there would be for 2013 and what it would look like,  I emailed them and was put on the list for when they came in.

Last year's model was a palomino Appaloosa named Lionheart but I decided not to get him when he came in, which was late October/early November.  He just didn't appeal to me 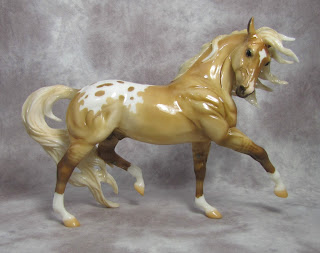 Because Lionheart was released so late in the year, it was assumed the new model would also come out at the same time.  But then some people started hearing July.  Well, one day I was actually fortunate enough to get to talk to the Breyer rep for the store I mainly go to and she said Wapiti would be released in April and that Lionheart was supposed to have been releAsed much sooner than he was.  Anyway, I confirmed with the store owner that I was on the list and that was that.  For some reason I got it in my head Wapiti wasn't due out until May so when people started posting on the model horse message board I frequent that they'd Lready gotten theirs, I began to get worried.  We're too many people on the waiting list at my store that I wasn't going to get a call?  I know I'm a good, loyal customer of theirs, but when I backed out on Lionheart and Lil Ricky Rocker had I made a major blunder?  When the store got in their new Marwari model I wasn't called and the owner had sort of implied I wasn't reliable when he'd said he'd called the people on the list he knew would be in to pay for it.  Oops.  But I'd gone in and bought Totilas when it had arrived.  But anyway, last night I went into my room and saw on my cell phone I'd missed a call.  Could it be?  Yes.  Yes, it was.  It was the store calling to tell me Wapiti had come in and was I still interested.  I called back, even though it was almost 8:00 and said YES,  I was definitely still interested so he said he'd put one aside for me.  This morning my mom and I went and since I was the first person to show up he gave me my choice from three.  I picked this one 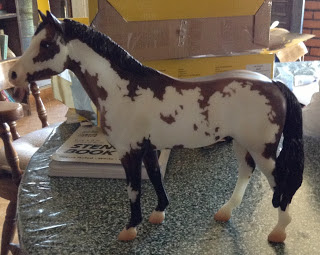 He's so awesome and even though I don't generally like Paints with that much white, I would totally have him as a real horse, too! While at the store I looked at the other models they had and got a chance to see the Lionheart mold up close. Not the actual model Lionheart but rather on the 2013 model Lusitano. I'm glad I didn't buy Lionheart because I don't really care for the mold. But that's okay because there's plenty out there I DO like! My dad's sister and her husband are in town today, passing through on there way from Mexico back home to Colorado and my mom, brother and I are supposed to go to a BBQ at the house they're staying at. It's my uncle's sister's house but she and her husband are out of town. I don't really want to go, but will.
Posted by Brenda at 12:05 PM