What a great Monday!

Yesterday I was supposed to have a doctor's appointment, but due to a conflict with her, I canceled and instead spent the day out and about.  I went and sat at the local park for a little while then headed up to North Scottsdale to check on "my house" to see if they've done anything more with the remodeling.  The new owners tore down the building with the pool and I keep waiting to see if they're going to get rid of the barn, but so far it's still there.  There's no horses in it, but it's still there.  I wonder if they're ever going to put horses in it.

After that I went and picked up a friend and we went to Desert Saddlery to see if they had any Breyers or other sort of horse-y gifts I absolutely had to have.  The models they had that were interesting to me were ones I already have, except one and I decided not to get him this time.  They did, however, have one I didn't have and that I've been looking for.  A Totilas resin.  I have the Traditional scale version, but have been wanting the resin 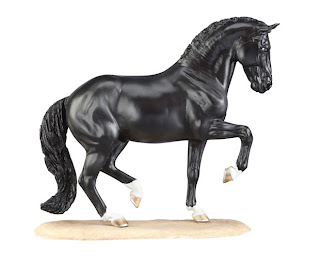 While at the tack store, I had to wander around and get my fill of all the wonderful tack.  When we first walked in, I just stood there for several moments and inhaled deeply.  I love the smell of saddles.  I also took some photos with my cell phone.  Excuse the crappiness, especially the last one.  hahahaha 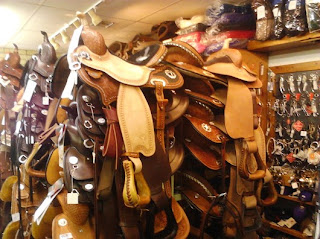 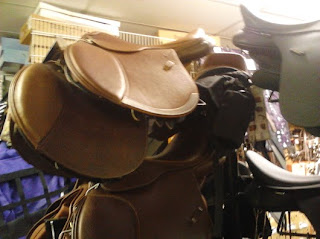 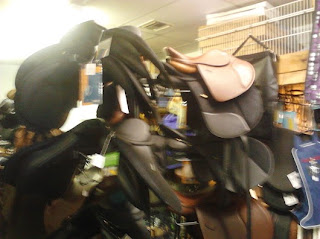 Although I grew up riding Western (I grew up in the southwest and 98% of riding stables only use western saddles) and have only ridden huntseat less than a dozen times (for school and a class I took through the city), I much prefer riding huntseat, even though I have bad experiences.  hahahaha.  I don't know what it is about huntseat that I like so much, but I do.  Right now, though, I'd ride Western in a heartbeat.  I actually had a dream Sunday night that I had gone somewhere and was given the opportunity to ride, which I jumped at, of course.  I wanted pictures of me riding since it was the first time in many years (like in real life) but all I had was my cell phone and for some reason nobody was willing to take pictures.  When I woke up, it made me think of the fact that despite having ridden over 100 times, there's only 2 pictures of me on horseback.  One is me on a little pony at a place called Rawhide and it's not exactly one of those carousel-type where they walk in a circle, but your horse is still tethered but the the other ponies.  And the other one is from the last time I've ridden, which was my 29th birthday (I just turned 43).  That's pretty sad.  I need to go riding again, but I have to lose weight.  Argh.  Why can't it be as easy to get off as it was to put on?
Posted by Brenda at 9:40 AM