This morning as I was driving into work, I was listening to the radio and the morning DJ was talking about the Boston Marathon bombing as well as the explosion at the fertilizer plant in Texas yesterday.  I fear for those that are missing, especially since many of them are firefighters apparently, but am also grateful for the many that were able to escape.  Anyway, the Boston Bruins played last night and had the Honor Guard from the Boston Fire Dept there to present the colors.  Their regular National Anthem singer started as normal, but only a short way in he stopped and the fans in the arena took over and finished the song.  It was so cool to hear 16,000+ people (it was a sell-out crowd) all singing the National Anthem together.  I imagine there wasn't a dry eye in the house and it brought tears to my eyes to listen to it.  There were no other sounds, just thousands of hockey fans singing the National Anthem.  It reminded me of the first hockey game I attended after the attacks on 9/11.  Many more people than usual sang the National Anthem that night and ended with chants of USA!  USA!  USA!  The Coyotes used to have a loud bang just prior to introducing the starting line-up and understandably when they did it that night, it freaked more than a few people out and they stopped doing it.  It's amazing how people come together during or after a tragedy.  The Patriotism is really heart-warming. 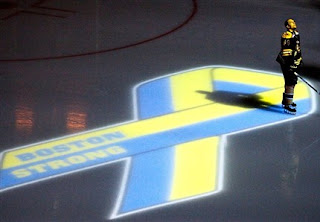