Welcome to the Herd!

About two weeks or so ago I went to the Stone Ponys website (part of Stone Horses/Peter Stone) with the intention of doing a basic Design A Horse, but just couldn't bring myself to pull the trigger and actually do it.  I did, however, look around and found a nice model in the "bargain bin" section.  I don't usually spend that much on a model, but with the way the Breyer prices keep creeping up, it won't be long before that is the standard price for a Traditional size model.  I had the option of having him left matte or made glossy and I stuck with matte.  He's sort of considered a One of a Kind since they only made 6 of him.  Anyway, the website said he would be shipped within 6 weeks of purchase so I sat back and waited for a shipping notice.

Yesterday my mom and I were watching the news when my brother's African Grey parrot shrieked real loud...a sound she usually reserves for the UPS truck.  I didn't see any shadows go by the window so figured it was for next door or something.  I did hear the truck start up and drive away, but again didn't give it much thought.  A short while later I got up to go do something and decided to look outside, just for sh!ts and grins, and I saw two packages in the carport by the door.  One was a soft package and one was a white box.  The box was the right size to ship a model in, but since I hadn't gotten a shipping notice and I hadn't participated in the April Pay It Forward, I knew it couldn't be a horse.  How wrong I was.  I picked it up and turned it over to see who it was addressed to and immediately saw the Stone Horses logo.  Yay!  So, here is Speckled Jelly Bean.  Yeah, I know.  Bad name, especially since it's a stallion!  I'll have to try to come up with something more fitting, but I'm so out of practice when it comes to naming models.  hahaha 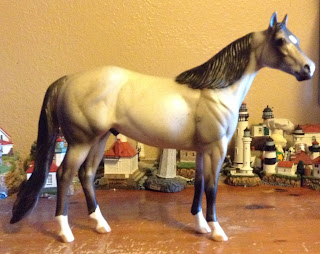 I've heard some horror stories when it comes to Stone horses so I went over him with a fine-toothed comb.  There's a spot at the very tip of his tail where some of the paint has rubbed off, but since his tail is black a marker should take care of that.  Also on his tail is a weird line all the way around, about midway down as well as a couple of weird lines further down.  I don't know what they are, but I'm not too concerned. 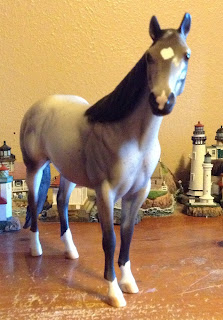 It's kind of funny, though.  I resisted buying a Stone for a long time and now that I have one, I've already got my eye on another one.  hehehehe.  They've also opened a round 2 of Design-A-Horse, but it's $30 more than what it was a couple of weeks ago and since I'm saving for a trip, it'll have to wait.

What have I gotten myself into?