If you have model horses, you know what I'm talking about.  That horrible, unmistakable sound of plastic hitting plastic as one horse falls over and takes out a bunch of his buddies.  It's something that makes everyone cringe and feel sad for the poor owner who possibly suffered damage to their show string.  I know it's made ME cringe on more than occasion and it's happened to me a time or two.  Usually you're around to witness the Domino Affect, but not always.  Not this time.

I had been in the kitchen with my family and after the dinner dishes were put away we all went our separate ways.  I went into my bedroom and was doing something, but then I happened to look to my right where some of my models are and...Oh.  My.  Gosh.  I was in shock! 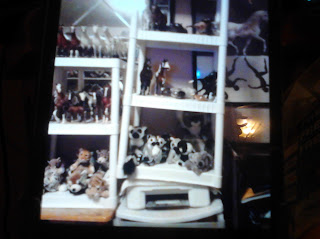 I apologize for the horrible photo.  I had taken it with my iPad mini, but then lost wifi connection and couldn't get my hotspot to work on my cell phone so I took a picture of the picture.  By the time I realized there was a wifi issue, the models had already been straightened, which is why I didn't just take a picture with my cell phone.  Yes, I realize it's not the best set up for delicate plastic horses and I plan to rectify that this weekend, but what's done is done.  For 10 minutes I was afraid to go anywhere near them.  My Totilas is in there.  My new Peter Stone horse is in there.  I was afraid to find there'd been scrapes and gouges.  Finally, though, I had no choice.  I am happy to report there was no major damage done.  Some body rubs on the horses on the upper shelf, but nothing major.  I don't live show anymore anyway so I'm not too worried about the scuffs.  I'm just glad there wasn't major damage and that I hadn't been around to see it happen.  I don't even know how it happened.  Did the Iris cart cave in some more and it tilted?  Did a mischievous feline somehow knock into it?  Since I wasn't in my room I will never know what caused the Double Domino.

Well, the  FBI has identified two men connected to the Boston Marathon Bombings.  It was 2 brothers from Chechniya.  That does come as a surprise since Chechniya has never really had a dislike for the US, only Russia, but it's rumored they were Islamic Millitants.  They've been in the US for at least 10 years and have other family here.  Apparently last night they were on the campus of MIT where they got into an incident with the police and ended up killing a campus police officer.  They then tried to rob a convenience store before carjacking someone in a Mercedes SUV.  After holding the driver hostage for 30 minutes and, allegedly, admitting to responsibility of the bombings, let him go.  The police followed the SUV where a shoot-out ensued.  It's rumored explosive devices were thrown from the stolen vehicle.  The older brother was shot and eventually died from his injuries.  Another officer, this one with the Transit Authority, was also shot and is in critical condition.  Boston, Newton and Cambridge are all basically on lock-down while they search for the younger brother.  People are being urged to stay inside.  Businesses are being asked to stay closed today.  I imagine it's a very scary situation for everyone in the area and my thoughts go out to you.  I don't think they will be able to take this guy alive.  They say his brother had a bomb belt on and was likely planning to not be taken alive.  If the younger brother has a shrapnel bomb on him or any other sort of bomb, I wholly support the police and FBI in whatever means they need to use to keep others from being hurt.  Even if he is captured successfully, he'll likely never face prosecution.  Probably either someone in prison will kill him or he'll kill himself.  Let's hope this has a peaceful solution and no more people are injured.