Happy Monday, Everyone!  Today is the first day of only a 3 day work week for me so I'm a bit more excited than I normally would be on a Monday.  hahaha.  Apparently some of our systems aren't working very well, though, so it might end up being an interesting day.

Okay.  So.  I can't make model horse tack.  At.  All.  I recently ordered some stuff to try to make some halters and I'll feature my success or failure here.  There's some people out there, however, who are really talented and every now and then I like to put their work here.  Today's featured artist comes from the Netherlands and has really incredible pieces.  Her name is Char and she was kind enough to give me permission to use her photos here.  Her website is http://charart.wordpress.com/

This first set, the bridle was made for a model horse show donation.  The detailing with the beads is really amazing. 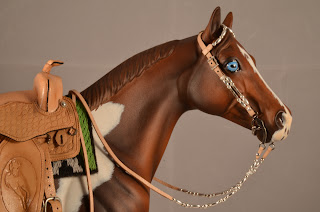 The horse itself it pretty cool looking, too.  If I had a horse, I'd want a real bridle like this.  It's very sharp.  Here's a picture of more of the entire set, even though it's only the bridle that's part of the donation, I think the saddle is awesome, too.  And look at the two differently colored eyes... 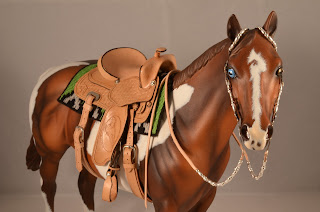 But wait!  There's more!  Not only does she make super cool western tack, she can also make it for Endurance riding.  And in neat colors.  I'm not ordinarily much of a fan of the color purple, but who cannot love this?  It would look really snazzy on a black horse or a steely dappled gray 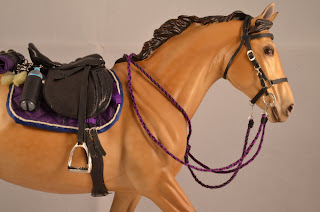 The individual details she put into it like the water bottle and what appear to be sponges is incredible.  And look at this harness set! 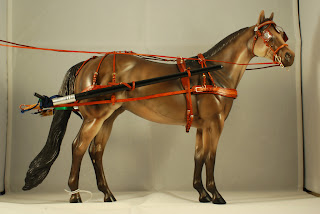 It just boggles the mind how talented she is!  I can't even begin to comprehend the amount of time of patience it takes to do something like this!

So, on Saturday I went and got some lottery tickets for my mom and I for the super big Powerball.  I won $4.00...so exciting.  Two people in Arizona won $1million each, but a 26 year old woman in Florida won the whole shebang.  AAAAA!  Oh well.  One of these days I'll win more than $7.  hahaha.  Anyway, I also stopped at the post office to get the money order for Kalahkaari.  The clerk lady showed me what I needed to do such as what to remove and what to leave on.  Apparently some people remove part of the money order that isn't supposed to be removed.  So, I go to my car and fill it out and put it in the envelope and drop it off in the drive-up box.  As I'm driving to Circle K for the lottery tickets a thought hit me.  Where was my portion of the money order?  Oh no!  I had FORGOTTEN to REMOVE it!  Oh crap!  Well, it's too late now.  I just hope it doesn't end up being a rather expensive lesson.  Keep your fingers crossed she'll get the money order and send the model on like.  I'm quite nervous, but I'm trying to be positive about it.

Well, that will have to be it for now.  I'll share more of Char's stuff at a later date because she has some photos with fun angles that I'd like to share, but work is calling.

Have a great day!