I think I'm going to have to take a break for awhile from Blab...at least until after Breyerfest, then we'll see.  Because BF is so close now, less than a month away, it seems like every other post is about BF.  Initially I found it exciting because I could live through the people who were going, but now it just bums me out and makes me feel excluded with all the talk about meet-ups and what room you're going to be in and all the people who're going to sell stuff at BF.  Some of the models being put up for sale are ones I'd really like, too.  But the straw that broke the camel's back, so to speak, was the thread from a Blabber giving away 3 sets of model-sized halters and fly bonnets.  All you have to do is share your favorite Breyerfest memory.  Well, I've never been and I don't know that I ever will go and to exclude so many people like that makes me unhappy.  People who don't get to go to BF don't have contests open only to people who aren't going.  Oh well.  It's my own feelings and I have to deal with them.  In the meantime, I'll be staying away from Blab until after Breyerfest is over.  It's easier that way...for me, at least.

On the way to work this morning I was going to stop at Jack in the Box to get a Pina Colada Smoothie.  It's been a couple of weeks since I've gotten one and I decided today was a good day.  Except when I pulled into the parking lot I noticed there wasn't a poster on the window for the smoothies.  Nor did I see it listed on the first menu board.  Because of how that particular restaurant's drive-through is, I didn't go to the ordering menu board because I didn't want to get up there and discover there were no Pina Colada Smoothies and have to back out again (that's what happened last week...they were out of the mix).  According to the website they're still available so maybe they're a permanent part of the main menu board.  I don't know.  Maybe I'll check the one near my house.

We're having a unit meeting this afternoon.  It doesn't look like it's going to be very good.  <sigh>  I'm just not having a very good day today.

**eta** And the hits just keep coming.  I decided to go take one last look at Blab and looked at the auction models thread.  Boy am I sorry I did.  Not only is the latest model to be released for preview one I am growing a conga on, but he's a GORGEOUS color.  <sigh> 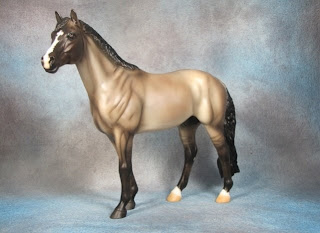 Now I REALLY need to stay away.  There'll only be one of this guy and there's no way I could ever afford him if he ends up on the secondary market.   Hopefully the color will end up on a regular run.