The start of another week...

Well, after an unexpected 3 day weekend due to car issues on Friday, we're back here on Monday.  Again.  Why does Monday have to come every week?  Hahaha.  That's a rhetorical question, of course.  And I know that if we didn't have a Monday then Tuesday would become the new Monday and everyone would hate Tuesday.  I just need to win the lottery or something so I didn't have to worry about this.  Or I should've done better in school so I could have a job I actually enjoyed going to.  Actually, I don't dislike my job.  It has its ups and downs, but it's a good company to work for.  I don't know.  I just don't like Mondays.  hahaha.

So on Saturday I got a nice surprise.  On Tuesday (or was it Wednesday?) I ordered two Stone horses.  One in the morning because I was feeling generous with myself and the other in the evening when I saw they were having a Last Chance Sale and found a horse I really liked.  Usually I let them be shipped UPS Ground, but decided to try USPS Priority in hopes of getting them sooner.  Well, I did, but not by USPS.  On Saturday I was hanging out in the kitchen when I heard what sounded like a delivery truck pull up outside and then there was a knock at the front door.  We rarely use that door so I went out the kitchen door and saw a FedEx truck.  The driver was holding a white box and I could see the Stone logo.  It was one of my horses.  I figured it was the one I'd ordered earlier in the day so imagine my surprise to see 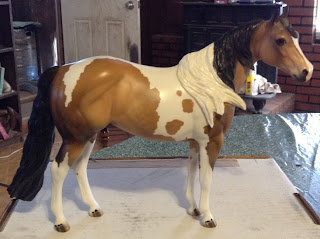 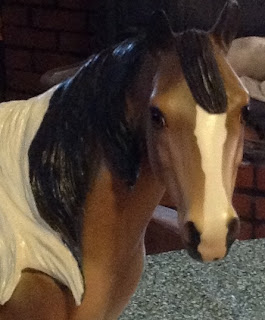 It was the Last Chance horse.   Why was he shipped out before the one I'd ordered much earlier in the day?  Oh well.  I'm not really complaining.  I was just a bit surprised because it came by FedEx...on a Saturday...and it was the 2nd horse I'd ordered.  Don't you just love that face?

I wish I had an update on my swap pony, but there's still no word from the recipient and she's now been online twice since USPS said it was delivered.  I contacted the swap hostess and asked how long I should wait before asking her help and she said a week.  We exchanged a few emails back and forth about the situation and she said she would "poke" the recipient about it.  I just worry it was delivered to the wrong house or something.  It kind of gets me down every time I read a post on the "Thank you" thread about people getting their boxes and how happy they are.  It doesn't matter if she likes it or not, she should still... never mind.  I don't want to say anything that might look unfavorably upon me.  :)

Speaking of emails...I use my work email for a lot of things so I get the email quicker and don't have to get on the internet to check like gmail or yahoo.  Well, my work email is attached to my Facebook, but I don't use it for personal emails unless I know the person.  When I got into work this morning, though, there was an email from one of my facebook/blab friends as well as one from a girl I'd boughten a horse from a few months ago.  I knew right away they were some kind of spam emails and not from the two ladies because
1) I'd never had correspondence with one of them outside of FB and Blab
2) The subject line for the one I had corresponded with outside of MH$P.

I looked at the second email, just in case, but it was a link to a website and it had been sent to a bunch of people with user names that had to do with horses.  It's annoying that there's stuff like that out there.  I, of course, didn't click on the link.  I was born at night but it wasn't last night.  hahaha.

Well, I'd better get some work done, I suppose.  Have a great day.