There's a thread on MHB asking what your Sentimental Value Model is...meaning, which model has the most sentimental value to you and why.  I said that Halla is probably mine 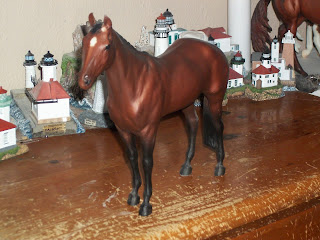 She wasn't my first Breyer, but she was definitely my favorite.  At one time I had two of them because I had my own and then a friend, who was growing out of collecting, gave me hers.  The one above is actually my 3rd one, but is the only one I have.  She was PIFed to me a few months ago.  I need to get some more to grow my conga of her.  Halla started my life-long love of bay horses and braided manes.

Speaking of congas...a conga is where you have multiple horses on the same mold but different colors.  Some people strive to get every single model of a certain mold (or molds if they really like multiple molds) and I know of people who have over 40 of one mold.  Before I joined MHB I didn't know what a conga was although I had several mini congas already going on.  My favorite one, though, is Lady Phase.  Currently I only have 7, but that will continue to grow.  I don't have the original Lady Phase (I did at one time) and will need to get a "new" one.  I bought one myself, found one at an antique store, bought a couple off MH$P and was PIFed the leopard appy on the far right. 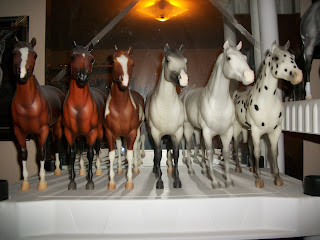 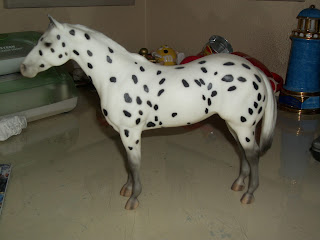 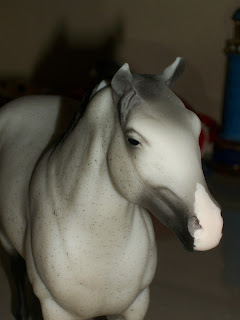 I don't really know what it is I like about this mold so much, but I like it a lot and hope they continue to make models with it.

There's a lady at work who trains service dogs for disabled people.  We're fortunate in that the company we work for and the building management allow her to bring them to work while she's training them, despite the distraction they sometimes cause.  Even though she tries to keep it at a minimum, they still distract those of us who like dogs.  Well, we're having a Take Your Child To Work Day on Monday and she will be bringing in her newest puppy, a Golden Retriever named Diane.  She's only 8 weeks old at the moment and too  young to bring in regularly but it's great she'll bring Diane in for a couple of hours.  I hope I get a chance to see her.  Usually the first few days a new dog is here Melanie encourages people to come and play with the dog because it gets them used to people.  Her last dog, Xander, flunked out of the program because he was a bit scatter-brained (his mother had 7 puppies and they all flunked out) and large groups of people made him nervous.  He's now one of Melanie's personal dogs (along with another drop-out Doug and some others).  Anyway, she sent us a picture this morning of Diane.  Isn't she adorable? 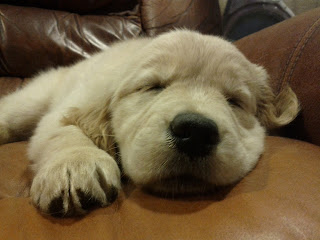 Well, I should probably get to work.  I have tomorrow off.  Hurray!  And there's some stuff I need to make sure are finished.  I haven't decided if I'm going to go try to find the Gila River horse herd or stake out a spot for the Salt River herd (the ones I saw last time).  I WILL have the camera with the bigger lens, though.  You can count on that!  hahaha.