Okay.  So.  On Tuesday I took the day off from work.  A Mental Health Day, if you will.  I went looking for wild horses, but found none.  Granted, I went earlier than I normally do, but that's okay.  They've been seen that early.  Anyway, I know it's not always a guarantee I'll find them.  Eventually, I decided to go to the Brass Armadillo, which is an antique mall in Phoenix.  I've always heard the ladies I used to show with talk about it and thought it might be a good source of models.  I found a few.  Mostly Classic size and a few Traditionals that I didn't want.  I guess I was looking for that epic find that I couldn't live without.  I found a few real horse saddles.  In good shape, too.  But since I don't have a real horse I don't need a saddle.  I did have a saddle once.  A Billy Cook roping saddle that I won at a PetsMart when Stateline Tack was in some of the stores.  Man, I loved that saddle.  I would've kept it, too, but my truck needed serious repairs and I didn't have the money so my parents bought the saddle from me and put it on consignment at a tack store near where they lived.  Guess what?  The saddle was stolen.  Someone allegedly broke in and stole it.  Why do I say 'allegedly'?  Because my saddle was the ONLY thing taken.  Even the police think it was an inside job.  Oh well.  It was insured, but for less than the worth, but at least it was insured.  But I digress.   I finally find this one...I don't know what to call it.  It's not an area because it was just one place.  It wasn't a booth because the booths were in a different area.  I guess you could call it a locker, even though it didn't have doors and wasn't locked.  Some of the others had those.  But this one didn't.  There were some Breyers in boxes and then this... 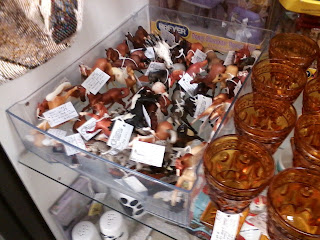 Sorry for the crappy cell phone picture.  But it was a box full of Stablemates.  A bunch of different ones and for different prices.  As you can probably imagine, it was difficult to see just what was in there.  I should have stood them all up and sorted them, but for some reason I didn't think to do that.  I just sort of went digging and came away with 5...

I knew as soon as I picked one up they were older because they felt different than the current ones.  More solid.  Despite being all jumbled in that box they were in pretty good condition.  I haven't identified who they are yet since that isn't really all that important to me.  I keep thinking about going back and getting some more, but that'll have to wait.  There's one or two more locations of the Brass Armadillo so maybe I'll try one of those instead.  We'll see.

So if you are on Blab and you read the monthly "I've been PIFed" threads you may have already read about this, in which case, you don't have to go any further.  The only thing that'll follow this is a rant about the weather.  hahaha.    Otherwise, read on.  Last Wednesday I came home from work to discover a LARGE box at my spot at the kitchen table and I asked my mom if it was for me.  She brings in the mail each day and puts it at our spots.  Anyway, she said it wasn't hers.  I had NO idea what it could be since I haven't ordered anything.  She suggested it was a horse and I said not likely since I hadn't ordered any and she said maybe it was from one of my "horse friends" (meaning the ones on Blab).  I said I didn't think so since I hadn't participated in the PIF thread in a couple of months and the box felt too light to be a horse.  She disagreed.  I also didn't recognize the address and said I didn't have any "horse friends" in Texas (I'd forgotten Sarah lived in Texas).  So I opened the box and saw the card and that I had been PIFed. 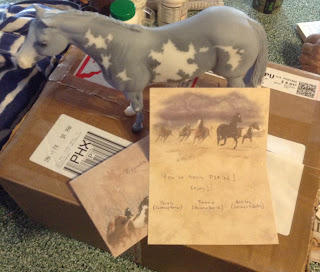 Unexpected PIFs are the best kind because you have NO idea.  Since I hadn't asked for anything in awhile, this was totally unexpected.  I have no clue how they managed to pull it off, the three of them, or where they got the idea to get me a Twill, but it doesn't matter.  I'm quite happy they did.  :)  Over the weekend I took some more pictures of her. 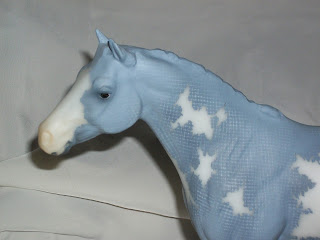 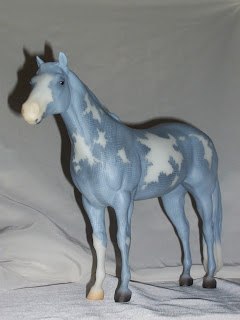 Pretty neat, huh?  And no.  Despite looking like she has texture to her, she doesn't.  That's just part of her paint job.  She doesn't feel any different than any of my other Lady Phase models.   She's definitely the most unusual one.  hahaha.

Well, this past weekend we were under a Severe Heat Advisory and boy did it get hot.  Yuck!  Yesterday it was pretty humid, too, although officially the humidity was only 19%.  It was still very hot and sticky.  I think we broke a record for high temperatures for this time of year.  No fun.  We'd been pretty lucky so far this summer but it looks like that luck ran out.  Hopefully relief is on the horizon and it'll start cooling down.  I hope.

Have a great Monday!

**Update** I have managed to identify my 5 Stablemates.  Wow.  I'm pretty happy.  The condition of them considering the ages is remarkable!