In all the excitement last week about getting Platinum Star, I completely forgot about the Breyerfest special being offered to both people at Breyerfest and those who weren't able to attend. I received mine on Friday, just like the UPS tracker said. I was a bit envious of the people who got theirs after only a few days. Why mine had to take a full week to arrive is beyond me, but I'm pretty much just happy I was able to get one since they sold out so quickly.

The Silver Florentine Misty is sort of a 25th Anniversary re-run of the very first Breyerfest auction model, which was a Gold Florentine. The silver one came with a neat satiny bag plus a Save the Date magnet for Breyerfest 2015. 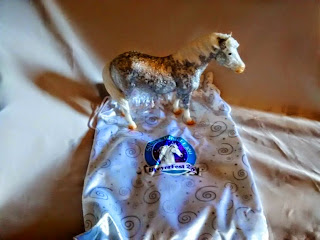 I'm still trying to decide if I'm going to go or not.  The theme is Viva La France and it's been fun speculating what models they might come up with such as a Stablemate quartet named Baguette, Fromage, Souflee and Eclair.  Eclair was my contribution to the names.  hahaha.  And possibly one called Creme Broulee and a Rose'.  There's a whole thread about it
http://www.modelhorseblab.com/forums/showthread.php?160403-Let-s-Speculate-Early!-What-Do-You-Think-The-2015-Celebration-Model-Will-Be

Anyway, it's a rather expensive trip to go to Breyerfest with just traveling and hotel costs alone.  I know I've mentioned that before.  Then, to add in models and other things, it would be a pretty penny to go.  I'd really, really like to, but I also want to go to San Francisco and do a lighthouse "tour".  I haven't been to a new lighthouse since about 2010, I think?  And even that one I didn't get to get real close since it was on one side of the border fence and I was on the other
The above photo isn't mine because I don't have access to mine right now.

Whoa.  How did this post go from being about the Misty Silver Florentine to one about lighthouses and zoos?  hahaha.  It's the heat.  I blame the heat.

Happy Thursday!
Posted by Brenda at 7:13 AM