Recently, Jennifer of Braymere Custom Saddlery hosted a photo scavenger hunt on her blog.  Initially I  was going to do it and even had come up with what I  believed to be pretty good and unique ideas, but then I saw several others had similar ideas and had done a better job at executing them than I would have done so I decided not to participate.  I did, however, come up with what I  thought  to believe was a rather unique photo for the category Scale Issues.  Most people used two different sized horses and others used bathroom scales.  Myself...I used a Schleich Alligator and a Clydesdale Stablemate...kind of a double meaning for Scale Issues since I  used an animal that has scales and a tiny version  of  one of the largest breeds 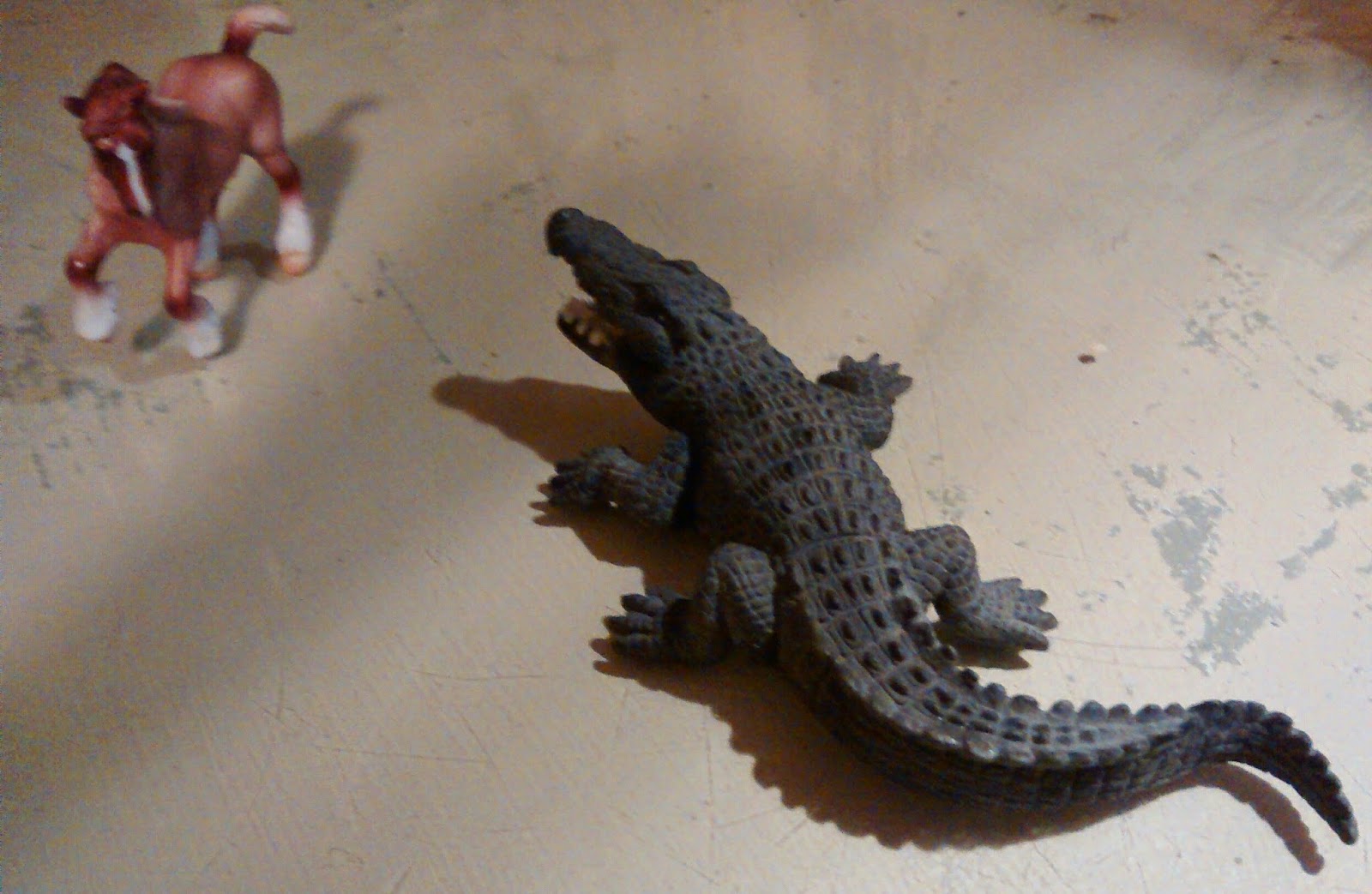 I thought it was a rather clever idea/photo and even submitted it to Jennifer.  Now, she got a gazillion entries and while I  don't  expect  her to acknoledge every single entry or post them all, especially  a non-entry, but it still would've  been  nice  to  know if it at least gave her a chuckle, which was my intent.  Again, I'm  not  bashing her at all.  I still want my entry to be seen so I  decided  to  post it on my own blog.  I hope you enjoy it.  :)

On Thursday  I  got to work and when I  opened  my  Lotus Notes there was an invitation  from my supervisor  for a one on one plus an email from him.  His email said he wanted  to  talk to me about an opportunity  he had for me.  Well, that was at about 6:30am that I  saw that and the meeting wasn't  until 1:00pm so that gave me several hours to wonder what it was he wanted to speak with me about.  I came up with several scenarios  ranging from 'yes, please' such as trying out to see if we could work from home like some of the other units and moving  upstairs where the bigger desks and fewer people are to 'welll...' such as helping with our unit profile we need to do for our next division meeting to 'uh, no thanks' which would be learning the recently vacated Recovery position or cross-train outside our unit.  Well, it turned out to be the Recovery job.  He doesn't  want  to  risk hiring outside  the  company for fear they would quit or use it as an opportunity  to  get  somewhere else in the company and he'd  be  back to square one.  He was quite excited  about  the  possibility  that  I'd  be  interested  and sid everyone in the Lead team was confident  I would be perfect  for  it.  The funny  thing  is  that  he used the things that should  keep  me where I'm  at as reasons  for  why I'd  be  good  for  the  job:  speed, accuracy  and dependability.  He even  said  I  was  one of his best processors.  So why do you want  to  move  ne somewhere  else  that  those  skills  wouldn't  be  used?  Anyway, I  told  him  I'd  think about it since he said I  had  the  option  of  saying  no and I  even  did  a job shadow on Friday, but I   already  knew my answer...For the most part I like my job and I  know  I'm  good  at it.  He often tells me as much.  And while I  didn't  want  to  disappoint  him, I  knew I  wouldn't  be  happy  in the other position  and I'd  end up being resentful  so today I  told him I  didn't  want  the job.  He said he understood  and everything  is fine...let's  just  hope  he means  that.  I'd  hate  for  all of them to start  treating  me  different  because  I  turned it down.

So...I don't  know  if I  ever  mentioned  it, but I  was an EMT for 8 years.  Even worked for an ambulance company and a fire department, although  all I  did for them was deliver supplies  and mail, but I  got  the job because I  was  an EMT at the time.  Maybe some day I'll  share a couple of funny stories.  Anyway, like many EMTs and Paramedics, I  really  enjoyed watching the show Emergency! and since I  was  just  a  kid when it was on, I  didn't  know  much about pre-hospital  medicine.  When I  became  an  EMT the show wasn't  on or being shown in re-runs.  It is, however, being shown as re-runs now and I  have  been  able to watch the first half of it daily  when I  get  home from work.  Some days, I have to wonder WHY I am watching  it since I  am  often  yelling  at  the  TV.  First of all, the way they lift people up off the ground to put them on a stretcher...they grab them by the arms and legs and lift.  Someone who is blown 20 feet off a 2nd floor landing by an explosion doesn't  get full body immobilization  but someone with an alĺergic reaction does.  John Gage and Roy DeSoto can do EVERYthing...high angle rescues, mountain rescues, trench rescues and SCUBA accidents.  They all fight fires without an SCBA/oxygen mask.  The only doctors at Rampart seem to be Kelly Brackett, Joe Early and Dr Morton, who apparently  doesn't  have  a first name.  And let's  not forget  Nurse Dixie McCall.  No matter what time of day it is Squad 51 has to call Rampart, Drs Brackett and Early are there as well as Nurse McCall.  And in addition  to  John and Roy being  able  to  do everything  under  the  sun, apparently  the doctors  can do everything  as well.  Today they performed Open Heart Surgery in an exam room because nobody  in Cardiology  was available.  I'm  sorry, but going  to  Medical  School  doesn't  mean  you  can handle every  type  of  condition  that  comes  into your Emergency  Department.  Maybe back in the 70s it was different, but nowadays  you have to have had that extra training  to be able to perform  open heart surgery.  I just have to keep reminding  myself  that the show took place and was filmed in the 70s.  A LOT has  changed in Pre-hospital  care.  Oh well.  I'll  still  watch  the  show.

I guess  that's  it  for  now.  The big Arabian show starts Wednesday  or Thursday.  I'll  go next week.  I'm  going  to  miss  seeing  all the horse trailers going by my office building.  Pima Center is right off the freeway  many of them take to get to the show grounds and Gainey Center is almost two miles away from that freeway.  There's rumors that we will be temporarily  moved back to the Pima  Center, but it won't  be  until  after  the  show and we'll  likely  have  been  moved  back to Gainey before the show next year.  The company I  work  for  is a subsidiary  of  a  very large company and that company has decided that they want  all of their subsidiaries  to   be under one name and they want  all the people to be grouped together according to their job titles so it's  rumored  we'll  be  moved  to  Pima to remodel one of the Gainey buildings then move the entire division to that building  but who knows if or when that'll  happen.