I found myself with an unexpected afternoon off today so I went for a drive.  First out to look for wild horses...I found several but not in areas good for photography...then just random driving.  While I was just driving around, I saw a small truck loaded with hay.  I don’t know how much hay he was carrying, but it was a small flatbed truck that looked like it was have to be off-loaded by hand.  I followed behind him for awhile since I knew he would be going where there was a ranch of some sort, but then I ended up ahead of him.  At one point, I was so far ahead that I only saw the truck when there was a dip in the road.  But then I encountered construction, which gave him a chance to catch up and eventually there were two cars between us.  At some point, I saw him turn so I turned at the next road and went back.  Unfortunately, by the time I got to the road he had turned down, he had disappeared already and I lost sight of him.  It hadn’t been all that much time so their delivery must have been shortly after they turned down the road.

Since I didn’t know where the truck had turned, I kept going down that road, knowing I’d more than likely spot some horse ranches and boy, did I.  There’s several training centers and an equine reproduction clinic in addition to privately owned ranches.  I saw quite a few horses but didn’t stop to take pictures.  Not real sure why.

When I got home, I looked up the area on Google Maps so I could learn some more about the places I had seen and came across a riding stable so I looked them up on Google and found a photo that, quite frankly, had me a bit shocked. 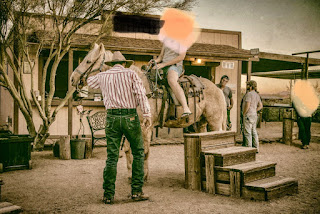 What is wrong with this photo?  I know Scottsdale is a tourist city, and a rather warm one at that, so a lot of people wear shorts and flip-flops, but did they actually let her ride dressed like this?  Where this riding stable is located is literally in the middle of the desert...lots of cactus and scrub brush.  Not exactly the safest for shorts and flip-flops.  Now, you might be thinking they possibly staged this photo for the website.  That thought had crossed my mind as well, but if someone sees this on their website they are going to think it’s okay to show up for a trail ride in the desert dressed inappropriately.  Oddly enough, their website states this:

They they only ‘suggest’ long pants and closed toed shoes, but they’re not a requirement.

Okay.  So I checked several other riding stables in the Phoenix metro area and not one of them requires long pants and closed toed shoes.  That surprises me.  That sounds dangerous and a huge liability if someone gets injured as a result of how they are dressed.  Yes, the stables all require riders to sign a liability waiver, but I work for an insurance company and those waivers don’t stop people from suing the stable.  The type of insurance company I work for actually writes policies for riding stables and other horse-related facilities/activities and my job within the company enables me to see the lawsuits.  I tell you what...if I owned a riding stable I *might* allow someone to ride wearing shorts, but the flip-flops would be a no-brainer.  Flip-flops = no ride.  Maybe that’s just me, though.

This is the first time I have followed a hay delivery.  Usually I follow horse trailers and even then not all that often since they are bigger and tend to move slower.  I don’t know.  Lol.  I’m a nosy person, I know.  If I see a horse trailer, I look to see if there’s any horses in it and if there aren’t, I wonder why not.  If there’s horses in the trailer, I wonder where they’re going...to a show?  A trail ride?  The vet?  Did they just buy it and are taking it home?  Who knows.  But it’s fun to guess.

It’s going to be warm this weekend.  In the 70s.  Great riding weather.  Too bad I don’t have access to a horse.  Lol. 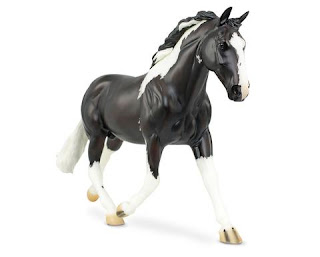 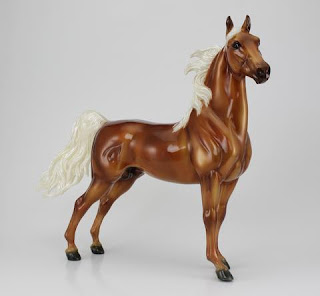