Did I catch your attention? I've read several writing How To books that said to grab your reader's attention early on...and then keep it, of course. I have to admit, though, that the title wasn't an original one but rather it's the title of an episode of the show Emergency! from the 1970s. Season 4, episode 4 to be exact. I know that in Hollywood they can take certain liberties with the truthand facts, but the reason why I watched this episode on Netflix when I haven't even finished Season 1 is the reason for this blog post and leads me to question if the people in Hollywood think the people who watch TV shows and movies are complete idiots. Now, as a precurser, I should admit something...I was an EMT for 8 years so I can't exactly watch this show with an open mind. No matter how many times I tell myself the show was filmed in the 70s and a lot has changed in pre-hospital medicine, I still can't help but get a little bent out of shape when I see some things while watching. Sure, I can just not watch the show anymore, but to my brain it's like a train wreck and I have to watch.

But this blog post isn't about the outdated paramedicine...not entirely, anyway...but rather the switch the show did and what the episode led me to further investigate, which I think is pretty cool. So anyway, Squad 51 got called to "the zoo". I didn't hear if it was just for an injury or if they said animal bite, but that is irrelevant. Now, when they mentioned "the zoo" I naturally assumed it was the Los Angeles Zoo, but when they showed the squad truck arriving on the scene I was pretty sure it wasn't. I've been to the LA Zoo and while I hadn't seen every square inch of it, I didn't see anything that looked like what they were showing on the episode. Then they showed a "zookeeper" and the patch on his shirt said LA County Zoo. More on that later. The zookeeper guy said a woman jad climbed over a fence at the lion exhibit to get a better picture of the lion and had somehow managed to fall in and the lion had bit her leg. He told Gage and DeSoto he'd tranquilized the lion but didn't know how long it would take to affect him. During this time they showed the lion 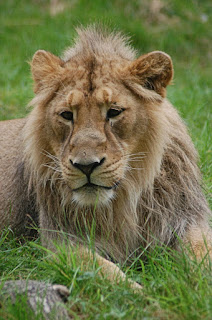 The pictured lion above and the one they showed in the episode was a young adult. At least a year old, possibly a year and a half. But definitely not an adult. So anyway, Gage decides to go down into the "pit" of the exhibit to treat the woman and prepare her to be removed. Initially everything was okay. The lion kept roaring, but he kept his distance. They lowered a Stokes Basket into the exhibit and Gage got her in. No c-spine precautions, though, even though she fell 10 feet or so onto concrete. As the firefighters were hoisting the basket the lion started getting more agressive. Oh yeah. And suddenly he'd aged a year and now looked like this... 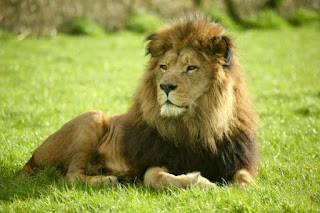 A full-blown adult lion. Yeah. And after Gage got himself out of the exhibit they showed the lion again and it was back to being a juvenile. Now, I can look past the extreme danger and unlikeliness of safety protocols allowing a paramedic to go into the exhibit while the lion is still in the yard, wide awake,as well as the lack of c-spine precautions since it was the 1970s, but what I can't look past the fast-aging lion that goes from juvenile to adult back to juvenile in the space of 5 minutes. Did the producers thing viewers wouldn't notice 2 noticeably different cats were used?

But the episode wasn't all bad because it led me to disvoer something I didn't know existed. I'd never heard of the LA County Zoo so I did a Google search and found out about the Griffith Park Zoo, which was open from 1912 until 1966 and was replaced by the LA Zoo about 2 miles away. Now, you may be wondering what I find so fascinating about a zoo that closed before I was even born and was a facility that would have no business being open today due to the tiny, concrete exhibits and big black bars that were common for zoos at one time, and some zoos still have them, but they are being phased out as zoos raise money to replace them. ANYWAY...although the zoo has been closed foralmost 50 years, the animal cages are still there. In Griffith Park. It's been turned into a picnic area and you can explore the grottos. The following pictures are courtesy of hikespeak.com 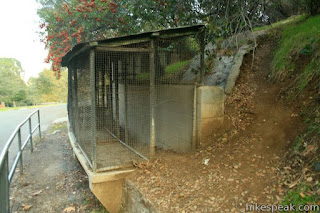 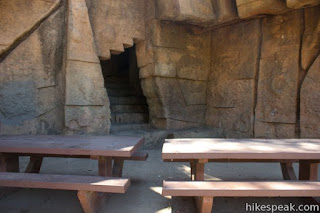 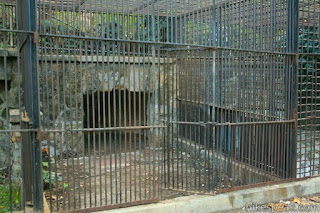 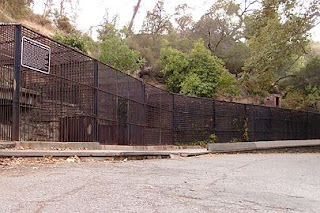 As soon as I saw this picture I knew it's where they had to have filmed this particular episode of Emergency! 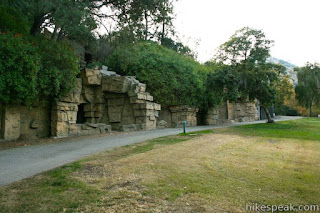 The viewpoint and road are almost identical to the one the squad drove down to get to the lion exhibit. There's more pictures here...


So anyway, now I have to go back to Los Angeles so I can check this stuff out. I probably drove past it when I was there in 2010, but I didn't know it was even there. The LA Zoo has opened some new exhibits since I was there last plus I've never been to the Orange County Zoo or the Santa Ana Zoo so I can make a nice weekend of it. Once it cools down again, though.

Today is my brother's birthday so we are going to a restaurant our family used to go to often when we were younger. I haven't been there since 1989 or 1990 when my Police Explorer group went there for dinner and it's closing at the end of June until they can find another location to reopen. We don't know when or if that will happen so we decided to go for old time's sake. I hope it's as good as we remember.

Our weather has definitely heated up. We were spoiled the past few weeks with below-average temperatures but that changed a couple of days ago when it reached 103. I'm definitely not ready for this.

Well, I  finally had the chance the find video of Steffen Peters and Legolas performing  their Freestyle routine at the 2015 World Cup in Las Vegas last month.  What a shame.  For those of you who may not have heard, this dynamic pair was disqualified because a small amount  of  blood was found on one of the horse's  sides when he was checked following the performance.  So many people were in an uproar, accusing Steffen  of jabbing him with his spurs.  So many people were quick to think the worst  of him for this one incident, despite  his past reputation.  Just like in that game of Operator where you whisper something to one person then they whisper it to another until it's  made it around the circle, the actual  injury  to Legolas went from 'a tiny bit of red' to 'lots of blood'.  Nobody wanted to listen when others tried to point out that Steffen  uses dulled, round spurs and would've  had  to  been really, seriously  kicking Legolas HARD to cause the amount of damage people believed he'd done, but if you watch the video of their performance, you will see the incident in question.  Even when the judge said it was only a 'tiny bit of red on one side' and video inspection  showed that the spurs he'd been wearing were the same ones he always did and couldn't  have caused major damage, people didn't  want to listen.  Yes, I  will  admit that I'm  a huge fan of his so I'm  a "bit" biased, but if you watch the video I'm  going to post, you can see for yourself what caused it to happen.  And you will maybe agree with me it was a shame he was eliminated because he had a very good performance  and  even got a standing ovation.  I think the winner of the event, Charlotte Desjardins,  is an incredibly  talented  rider, but Steffen  could've  given her a real run for her money.

So, watch the video...or skip to near the end...you will see that when they gave their final salute, the crowd errupted into cheers and applause and Legolas 92 freaked out at the sudden noise.  Steffen  likely "dug in" (with his legs) to stay in the saddle and he probably  put more pressure  on  the  one side, which