*warning* this post is going to be pretty much a whiny, woe is me, rant-y kind of thing.  Feel free to back out now.  Lol.

A couple of weeks ago I had a birthday and as I drove home tonight from picking up dinner for myself and my mom and brother it occurred to me that I am less than a year away from a major milestone birthday.  The number is scary, but I have never felt my age anyway so I know it's just a number and not how I feel.  But it also hit me that it's been 20 years since I was last on a horse.  Next Sunday, to be exact 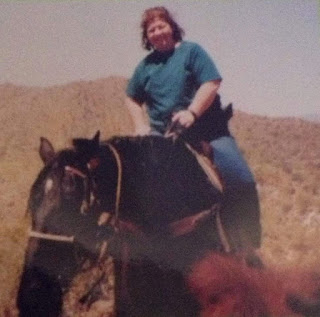 A friend had gotten me (and herself) a 4 hour lunch ride in the Superstition Mountains.  It was the longest either of us had ever been in the saddle at one time but we were both excited.  It was a fun ride.  There was 6 of us, i think, all women, plus our male trail guide.  My horse was a lovely large thoroughbred named Larry.  I got the biggest horse because i was the biggest person, both in height and weight.  Literally, i was the tallest in our group, even taller than our guide, whose name was either Bud or Buddy, and while my friend had a few extra pounds, I was the heaviest.  I keep mentioning that because that is the theme of this post.  Me, my weight, and horses.

I used to ride all the time.  Just about every weekend when I could.  I had a good friend, not the same one who gifted me the birthday ride, whom loved horses and riding as much as I did so we went whenever we could.  She had an aunt with horses and in high school I got to help her with them.  "S" had grown out of them by then, preferring to go out with boys instead of the barn.  Plus, I babysat her cousins so I often had the opportunity to go to the barn with them.  Her aunt even encouraged me to visit the horses when she wasn't able to visit and feed them.  She (the aunt) helped me get a job babysitting the barn owner's grandson in which I was paid both in money and the ability to tale a horse out for a ride.  Unfortunately, the job didn't last long due to marital problems between his son and daughter-in-law.

During that time, my weight increased because food became more important than riding.  As much as I hate it and want to change it, nothing changes.  I have the tools to lose weight.  I have done it before and I love it when my clothes fit better and I get good looks instead of looks of contempt.  I can't even go to horse shows anymore because my weight has caused mobility problems.  I can still go look for and photograph the wild horses because I don't have to get out of my car most of the time, but I can't go places where I could potentially touch them.  I have no cartilege in my left knee and my back is super messed up...a condition, ironically, caused by horseback riding and Equine Assisted Random Gravity Checks 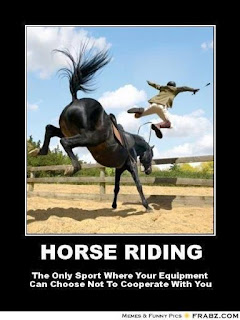 Realistically, it is likely the back issues that will forever keep me out of the saddle since it's not recommended that you ride if you have a back injury.  You know what I have to say about that, though?  Phooey!

It's been 20 years since I've ridden a horse.

I won't give up.  I can't give up.  Somehow, I need to re-wire my brain to want horses and riding to be more important than food.  I want it.  I just don't know where to find it.  The weekend of my birthday I saw the movie Bohemian Rhapsody.  I've always been a fan of Queen.  Not to a point where I would seek out listening to them, but I would enjoy hearing them when they came on the radio or at a hockey game.  But since seeing Bohemian Rhapsody, I have been making a point of listening to them.  Bohemian Rhapsody is my favorite song but Radio GaGa is the one that has been stuck in my head, especially one part:

You had the time
You had the power
You've yet to have, your finest hour

I think those words are sticking with me for a reason.  And then there's the Climb by Miley Cyrus.  Well, pretty much the entire song.  But the opening verse:

I watch horse videos of people being surprised on Christmas with a new horse.  I look tack catalogs.  I follow horse trailers when out driving.  I read books (fiction and often written for a much younger audience) centered around horses.  I often think about them.  I've had dreams where I sat on a horse or have ridden and it made me so happy.  But then I'd wake up to the realization that it was...Just a dream.

Also from The Climb:

Just got to keep going
And I, I gotta be strong
Just keep pushing on