A few weeks ago we were notified by email that they would be removing the coffee machine in the main break room.  I don't drink coffee and the hot chocolate the thing spit out was gross so I didn't really care and most of the people that drink coffee around here either bring some from home or belong to the coffee club a couple of employees set up.  Anyway, we weren't told when it would happen so I forgot all about it...until last week when a co-worker told me they were in there removing the snack machines.  What?!  Obviously this caused quite a stir.  Why would they remove snack machines that were used daily by many people in the company.  We don't have any other options except an overpriced convenience store up the road or a 10 minute (one way) Circle K.  Eventually, though, it was found out that we'd contracted with a new vending machine and they were only replacing the machines.  My co-worker said the soda machines were still there, but that wasn't exactly true.  A little while later I went to the break room to check out the new machines and was quite amazed.  ALL of the machines had been replaced, Coke and Pepsi, too!  And boy are they fancy!  I finally got a chance to take a picture a little while ago... 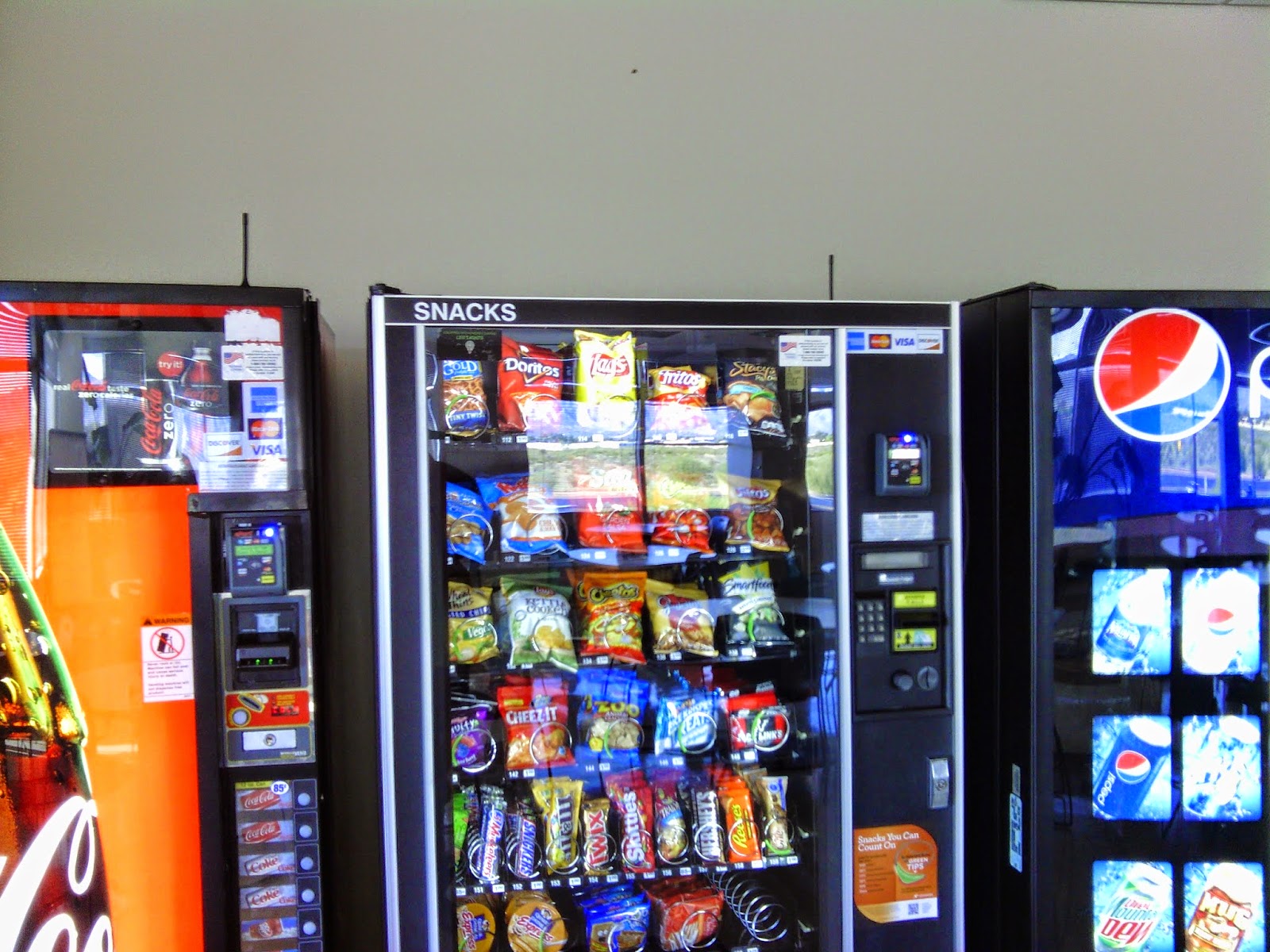 They have card readers for using credit cards and debit cards.  Wow!  Now, before you wonder just how expensive these machines are, a can of soda is 85 cents and the snacks range in prices with none of them being over $1.25, but when they run out of change or you don't have any handy, those card readers are sure going to come in handy.  There's a 4th machine around the corner that has cold food items such as sandwiches and things.  It currently only has a few offerings and is usually empty more often than not.  Hopefully this new vendor will be better at keeping it filled.  Those prices did go up, which is a real bummer.  I am still waiting to see what they will put in it to justify the $4.00 and $5.00 cost.  Charging $3.25 for a couple of White Castle burgers is ridiculous so I can only guess what will be for the higher prices.

So, this morning at about 3:30 or so I was lying in bed when one of my cats "flew" to the window.  I heard a scratch on the screen and was briefly concerned someone was trying to cut their way in (the window was open), but our front yard is desert landscaping so it's covered in small rocks and you'd hear if someone was outside because it makes crunching noises.  Eventually Temecula lost interest and I was able to relax enough to go back to sleep.  Well, when I went to leave for work this morning, I saw this... 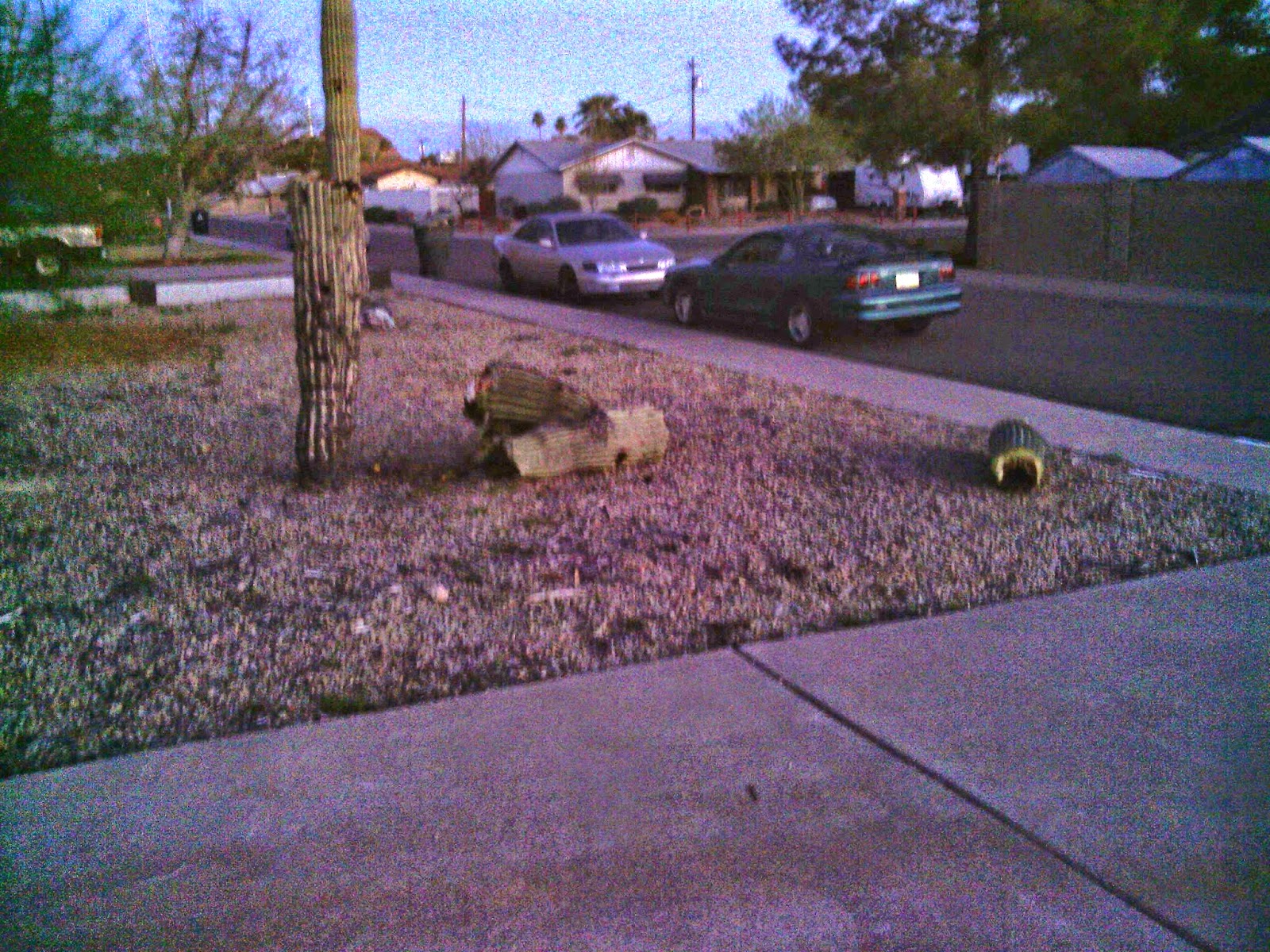 Just yesterday I commented to my mom that the cactus was leaning pretty hard and she said it would probably fall soon.  This is possibly what caused the odd reaction from my cat at 3:30 since my room is on this side of the house.  It's a shame the cactus fell...half of it anyway...as birds nested in it.  I'm confused as to how it fell the way it did.  It was leaning towards the other cactus, but it fell to the side and the one arm it had was on the side it was leaning.  It's just very strange.  The other one in the yard seems to be doing okay and isn't leaning at all.

My weekend was pretty good.  Did my laundry Saturday.  Mom and I went to IHOP for breakfast Sunday.  It was pretty good.  We haven't been to Denny's in almost a month because I was getting bored with it.  We're now trying to eat more breakfasts at home on Sundays and only going out once or twice a month.  My mom's birthday is this Saturday so we discussed where she might like to go for dinner.  I have to remember to talk to my brother about it.  My birthday is 3 weeks from tomorrow and we'll probably go to Outback Steakhouse.  Usually we go to Logan's Roadhouse and my brother will probably vote for Texas Roadhouse.  I don't care so long as I get prime rib and I don't have to drive.  hahaha.

Well, that's about it.  Have a good one!

Aphrodite...next in the Greek Goddess series...

Imagine my surprise when I saw an email from Breyer just a little while ago, inviting me to enter to win the next in the Greek Goddess series, Aphrodite 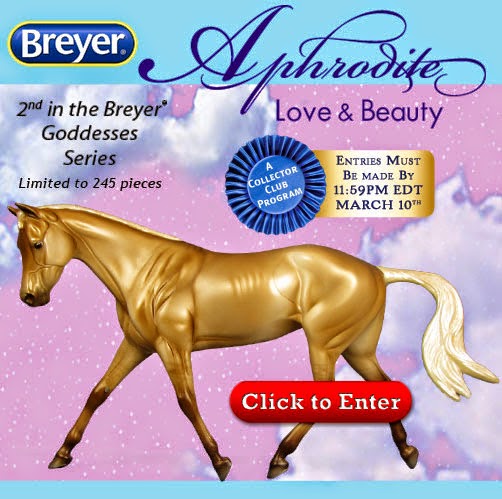 It hasn't even been a month since Hera was announced...more like 3 weeks.  I don't think I've ever heard of them releasing two that close together.  Some speculate it might be due to the goof at BEB where they gave one away instead of Cafe au Lait, but I don't know.  It does seem a little odd, though.  The Strapless mold isn't one I conga.  I don't have any of her, in fact, but because I've already seen what she looks like "in person" (I didn't see her in person, but I saw an 'in hand' photo, I know I like the coloring so I entered for her.  If I hadn't seen her and went based on the pictures from Breyer 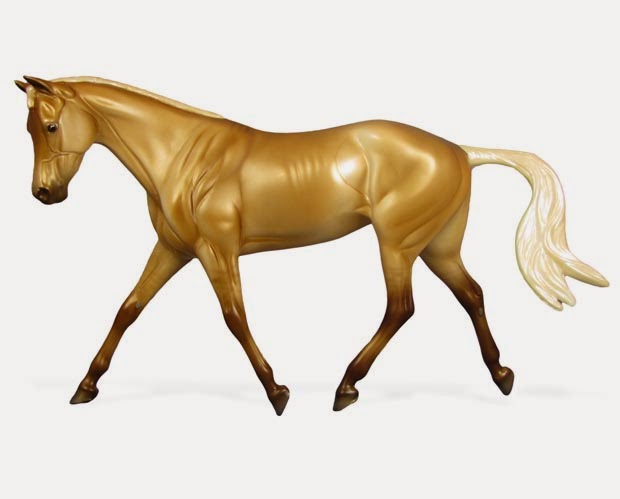 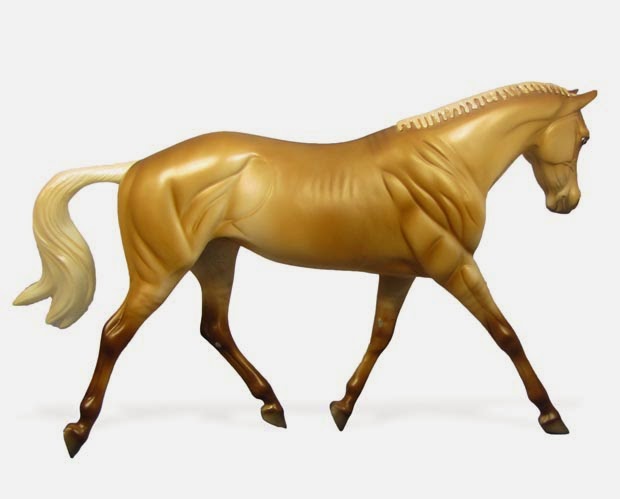 I'm not sure I would enter, but it's a moot point now.  hahahaha.  It's another short entry...today until Monday night so I don't have to remember quite so much to enter.    When they give you more than a week or whatever, that's when I have problems remembering.  My old brain, I guess.  They also raised the price on this one.  Hera was "only" $135 and Aphrodite is $165.  Oh well.  If I win, I win and I'll pay for her.  If I don't win, I won't be hugely disappointed.  <shrugs>  We shall see.

On the Breyerfest front, they released another model.  This one is a tent model so you don't need any special ticket times or anything. 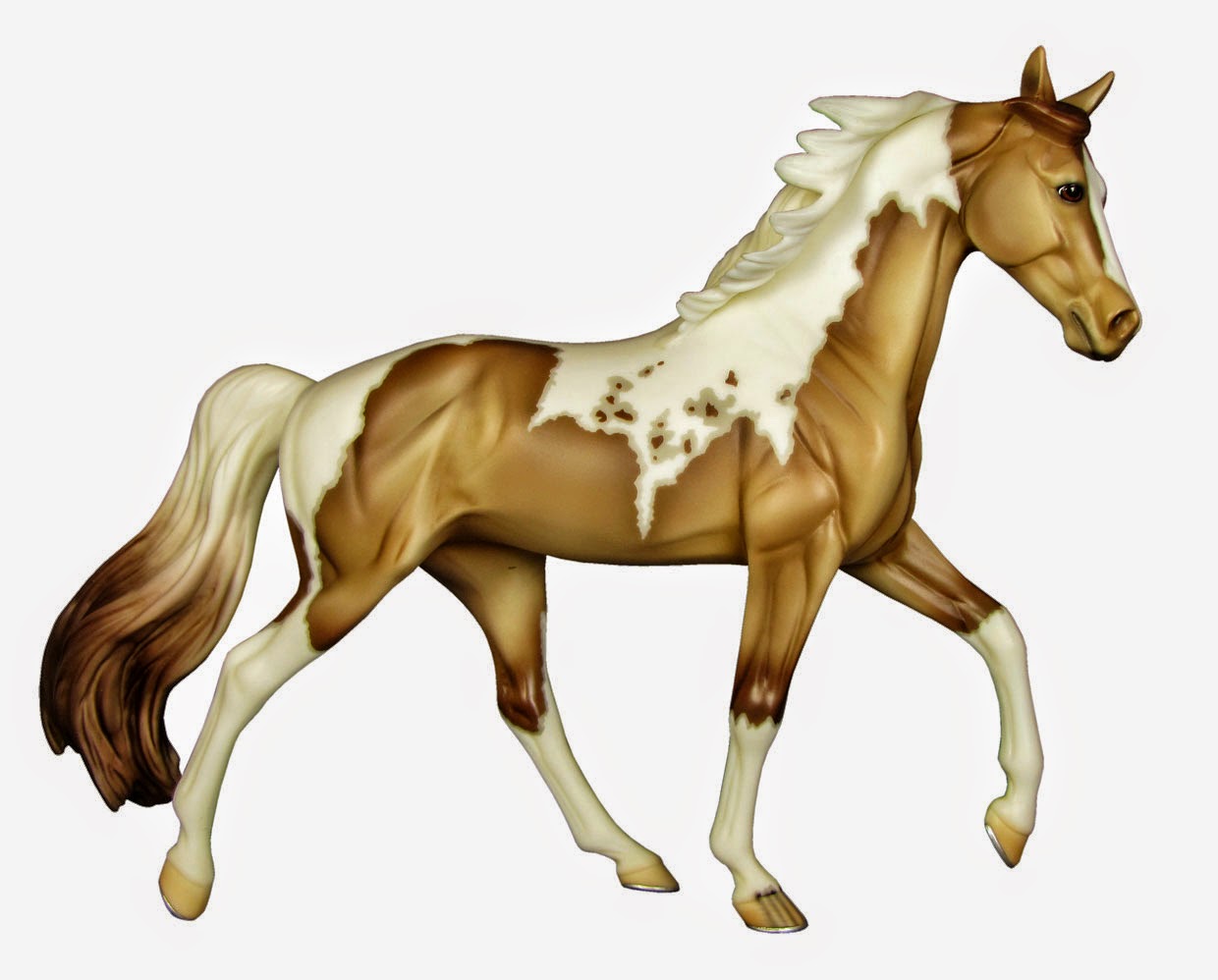 Champagne Wishes is done on the Blue Grass Bandit mold and is rather nice-looking.  I liked the black and white Lady C from last year better, but this one would be nice to have.  I don't have any BGB models and I doubt I'll try to get one, but you never know.

It's Friday.  Hurray!  I have no major plans for the weekend.  It's my turn to do laundry.  Yippee skippee.  hahaha.  It's supposed to be in the 80s all weekend, which is a huge change from the rain we got last weekend.  Bummer.  But that's what I get for living in Arizona.  Heh.  Even if I could talk my mom and brother into moving to a state with nicer year-round, I probably wouldn't because I have a decent job and decent jobs are hard to come by these days.  I've been here for almost 13 years, the longest I've been anywhere.

Anyway, I guess that's it.  Have a good weekend!

So, this past weekend was the Big Easy Bash in New Jersey.  How I wish I could've attended, but they limited the number of people that could go. . And, well, let's face it...I couldn't afford to go. hahaha. They really need to do something big on the West Coast again, even though it wouldn't include a tour of the Breyer offices and such.  And they need to do it with giving me enough notice ahead of time that I could go.  Oh well.  Maybe they'll have another Passage to the Pacific, maybe not.  They used to have Breyerfest West or whatever it was called, but they stopped doing that several years ago.  Attendees were given a tour of the archive room and allowed to see some of what's planned for the future, but they weren't allowed to take pictures.  I don't know if I would've been able to keep myself from doing that.  Apparently some people were trying to be sneaky with their cell phones, but as far as I know, no pictures have cropped up yet.

Anyway, so there was some pretty cool models to be had during the weekend and I wanted to share some of them.  None of the pictures are mine, they come from different people on Blab, but I've indicated who shared them.
The two on the left were the "celebration" model Cafe Au Lait.  He turned out real nice and if you notice, the one on the left appears to be a little darker than the other one.  The blue and white Sherman Morgan on top of the Fjord and the 3 traditionals on the right are all from the "special run" store as are the two little paint Stablemates.
I really like the bay Totilas and wouldn't mind finding one on the secondary market somewhere down the line, but we shall see.  Not many of them were made and they seemed to be pretty popular.

**edited** This guy is named Excalibur and was the table centerpiece that one person at each table won in a drawing. Orrdinarily I don't really care for the mold, but the color is quite delicious (thank you to Niki for providing the info!)
One blabber, when she opened her package for Cafe Au Lait got an interesting surprise
This is the next model in the Greek Goddess series...Aphrodite.  There's some speculation as to whether this was a goof or intentional, but a lot of people are looking forward to the next drawing for this series, me included.  I don't have any on the mold, but I'll definitely be entering.

Finally, they had a couple of small Stablemate offerings.  The first one is on the Chrome mold from Breyerfest last year and one I hope to conga, but I don't know if I'll add this one in the future.  The color is kind of...not really my thing.  His name is Bourbon Street
But this other one...Moon Pie...I have one coming.  Hopefully she'll be mailed today.  I spent more on it than I normally would a Stablemate, but only 200 were made and the price I paid seemed to be the going rate everyone who was selling theirs for.  I did see a couple at higher prices on MH$P so I'm glad I held out a little while longer.  Of course, if I waited even longer I probably would've gotten a better price, but again,  only 200 were made.  The mold is Dungaree and is also from 2013 BF, which I also have.  Actually, I have 2.  hahaha.
My weekend was pretty good.  It rained off and on all day Saturday.  A small tornado touched down about 5 or so miles east of us.  And we didn't just get some rain.  When it rained it really came down It was pretty cool.  The airport recorded almost an inch of rain, which is almost a record.  Or maybe it did break a record.  I don't remember.  But boy did it pour.  And we got some thunder and lightning, too.  Not much lightning, but some.

Well, it's Monday.  I'd better get some work done today, don't you think?  hahaha.