How the heck did THAT happen?

I started my Monday like any other Monday I have off. I went and got my "traveling breakfast" of Six-Cheese (they're called 6 Cheese, I didn't order a quantity of 6) bagels and soda, going to a different Einstein Brothers Bagels because the manager from the one closest to my house moved to a different location and I decided to go see him. He's a nice guy and I miss seeing him on a regular basis. And he even gave me my food for free. Can't beat that with a stick.

From there I went up to start my loop along the Lower Salt River. Initially I didn't see anything, but then I spotted a singleton on the side of the road and got some pictures of him. Then I saw what initially I thought was 3 horses at one of the recreation areas, but it turned out there were at least 6 there, the others were in some brush so I stopped my car in the middle of the road to take pictures. Nobody was at the picnic area so I knew nobody would come up behind me, although it didn't stop me from looking. hahaha. And I'd be able to see anyone coming my way. Anyway, I was only in the middle of my own lane on a two lane road, not in the middle of the entire road. So, I was taking pictures and this dude in a van stopped right in front of where the horses were (they were behind a fence) and came over and started talking to me. Kind of creepy, but eventually the horses moved on and so did he. My car was running the entire time so I wasn't too worried about him. I could just hit the gas pedal and be off. But it's situations like this that keep me from venturing too far from my car when there's others around. I don't know if I've ever seen this group before. There was a chestnut that was a really light color that made him stand out so I figured I would remember seeing him, but I couldn't. But then it occurred to me that maybe I'd seen him as a yearling or a little older. I'll have to check my other pictures so see if I can tell.

After completing my 2nd loop, I noticed it looked like it was snowing to the north so I headed back to the Beeline Highway and started up north. I figured I'd go as far as Sunflower and if I didn't see any snow by then, I'd just turn around and head back. Except that's not what happened. When I reached Sunflower, which is only about 30 or so minutes from where I was at the moment, it was snowing pretty good, although some might call it "Grapple" because it was more like ice pellets and not snow, but it was still pretty neat considering it'd been more than a year since I'd seen ANY snow other than on TV 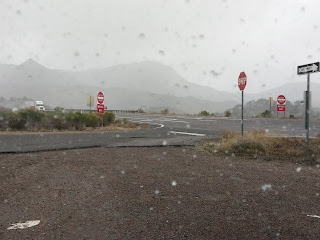 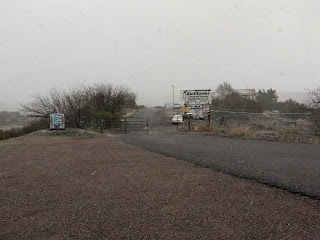 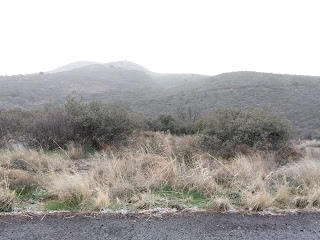 I even got some video, but I don't know how to embed it into Blogger so it can be watched.  Bummer. 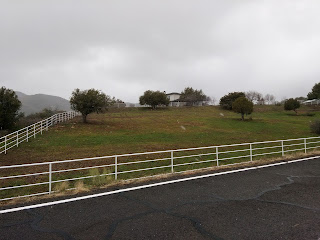 After leaving Sunflower, I decided to go "just a little" further and before I knew it, I was seeing signs telling me Rye was only 9 miles away. Well, if Rye is only 9 miles then Payson is only another 11 miles after that so I may as well just continue on to Payson. So, I ignored the "Snow chains or 4 Wheel Drive Mandatory" sign and kept going. I thought it was funny when I passed one area where there were a bunch of snow plows parked. Huh. Snow Plows here?" but then I discovered they were needed. The Beeline is a 2 lane in each direction road and the outer lane had been plowed northbound, but the inner lane hadn't been. Guess which one I chose? Yup. The inner, unplowed lane. I wasn't there very long, though, when my car started to fishtail a little so I quickly got into the plowed lane. hahaha. I won't be doing THAT again anytime soon. Anyway, before long I was seeing the telltale signs that Payson was "just around the corner". When going northbound in Rye, you see signs advertising businesses in Payson. When going southbound, it's for Mesa and Scottsdale, but mostly Mesa. It's how you "know" you're either getting close to Payson or leaving it. At least, that's how I saw it during the many trips there and back over the years my parents lived there or when we went there for vacation. 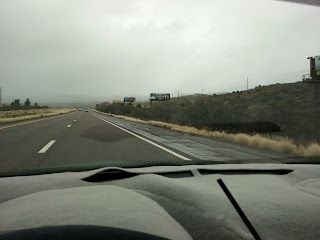 Once I arrived in Payson, my main intent was to go see what my parents' house looked like. We'd been told by a neighbor that the new owners had made quite a few changes to the inside, like new carpet, fix the floor that was already drooping when my parents moved in, and improve the heating. I wish I could've gone and knocked on the door to ask to see the inside, but I'm not that daring.   They also made a couple of exterior changes such as the fence into the backyard was improved and they added a shed or something.  The sign on the left with their name is new and it looks like they may have graded the driveway so it was all one level.  I want to say a tree is missing, too, but I wouldn't swear to it... 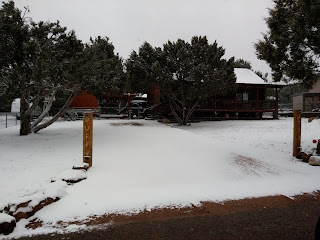 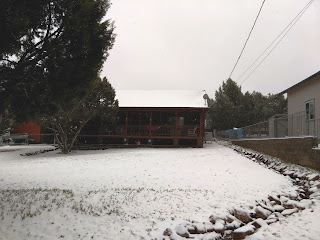 It was a little weird seeing it. I haven't been to Payson since helping my mom move back to the valley in 2010 and it made me feel a little down. I miss my dad. But I'm glad I finally made it up there, plus I got to see snow! 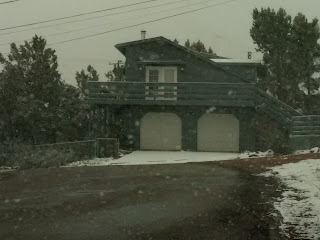 Next stop was Green Valley Park. My mom used to take her dog Ebbie there to walk around the lake, but then the dog park was built so she started going there instead 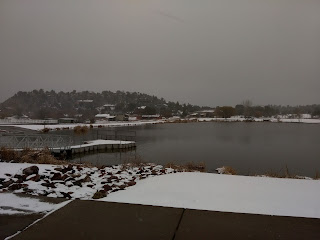 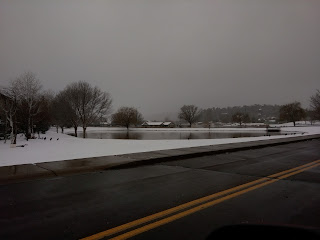 The little black birds were crazy. They started crossing the road so I stopped to wait. And I waited. And I waited. It seemed like just when I thought there were no more, a few more would run across the street. They were cute, though.

Finally, it was time to head back down the mountain, but first a stop at the rodeo grounds for the snow. 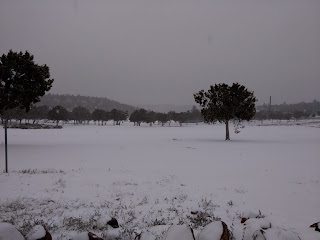 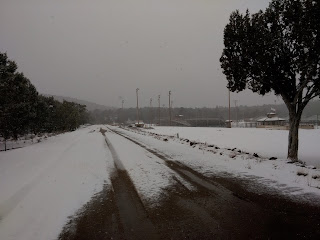 There's nothing to see there right now anyway because there's no events going on.  I remember during the Rodeo-Chediski Fire back in 2002, they used the rodeo grounds to house the larger animals that had been evacuated from the fire area.  The dogs were housed at the dog park and the cats were at the humane society.  The people were housed at the high school.  It was a crazy couple of weeks for sure.  Living in the mountains, you learn to be prepared for forest fires and while my parents weren't on evacuation alert for that fire, they were for a couple of others.  They had suitcases packed and by the door and the plan that if evacuation was only going to be a day or two they'd go to the high school, but if it was going to be longer, they'd bring the dogs down to our house.

It was still early when I got back into town so I did my loop again (the highway to Payson intersects with the one for where the horses are) and didn't see any, but as I was coming back out towards Beeline I noticed a couple of cars on the side of the road and saw there were some horses in a bit of a ravine. Nice way to end a day.
Posted by Brenda at 9:28 AM