What do you know...I'm still here.  Hahaha.  I just haven't had much to say lately so rather than blog more about healthcare and health problems, I didn't blog about anything.  I will say, since I blogged about it specifically before, that I'm nearing the end of a horrendous journey through the medical mine field.  Apparently Aetna thought it would be a good idea to have me off work without pay for 2 weeks and take all of my Paid Time Off.  I only just discovered this on Tuesday when I checked my bank balance online and saw it was significantly below what it should have been.  Unfortunately, I won't get the missing money until next payday, which is next week, and I was supposed to have the days reversed to get them back into my time off, but instead I ended up in the negative two additional days.  I'll give them a couple of days to see if they straighten that out and then I'll call again.  The money is more important than the days off anyway, but both are mine so I should have both.

Anyway, so today Breyer released an image of the 2nd Premier Club model...kind of odd since we haven't even gotten our FIRST model yet and last year (the first year I was in the club) they posted a hint, not the entire thing.  Initially I was going to offer it to someone who said they wanted both, but I think I may keep him because he looks pretty neat.  And last year I only kept one of the 3 models and that was only because I couldn't find someone to buy that one.  hahaha.

So, the new model is a new sculpt of a Clydesdale by a famous artist in the hobby and you have to choose which version you want.  There's the typical plaited version so common with the breed, especially when in shows or whatever

Very nice model.  The shading is beautifully done and the dapples look nice, too.  And then there's the "free-flowing" version

That's the version I picked.  I don't know why, I just like him better with the free-flowing mane and tail.  The order form didn't use a drop-down menu for picking which one you wanted, you just typed it into the box, but when you hit "submit", an image of the plaited version came up so there's concern about that (not just me, but other collectors had the same issue) so I sent an email to Breyer to ask about that.  He won't be available until August, but I guess they need to know how many of each to make so they're requesting that we reserve our pick now.  I hope the actual model looks as good as the prototype, but that can be a crapshoot.

Yesterday I had the day off and had intended to go to the zoo, but then my knee decided it wasn't having any of that so I went off looking for wild horses and I found a couple of bands.  As I was driving down to Butcher Jones (just about everyone in the free country knows they hang out there so no point in keeping it secret), I saw some coming up from the wash so I "met" them by the beach.  They went in for some water then moved on down to the OHV trail.  It was kind of weird because suddenly there was a lot of movement and then some clouds of dust and they came running back.  At least, I thought it was them coming back, but I quickly realized it was a different band.  The first group must've startled the second one as they came out for water.  Well, later on that afternoon I went back to Butcher Jones and saw that BOTH bands were hanging out together in the water.  They weren't really mingling, but they were both there together 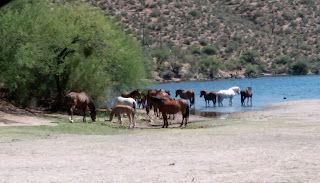 The two on the right (grey and bay) and some of the others are part of the grey's band which includes my favorite mare Sapphire with her adorable weanling Diamond.  The band stallion is Shadowfax.  I don't know the names of the others, unfortunately, and I wouldn't swear to having ever seen them before.  I'll have to look at my other pictures from Butcher Jones.  If I've seen them before, it was before the foal was born.  I had my big camera and I took a bunch of pictures, but I haven't downloaded them, yet.  I'm hoping this one picture I took turned out as good as it looked to me.  A stallion from "Band 2" was standing on the beach and was looking up towards my camera and all you could see behind him was the water and mountains.  I need to get those pictures uploaded soon.  I was going to do it today, but lacked the motivation.  hahaha.

Well, I guess that's it for now.  Our temperatures are starting to get into the 90s now and we've had to run the air conditioner a couple of times.  Nothing major, just for an hour or two when the house temperature reached 86 or 87.  86 degrees is our "magic number" for when it's time to turn it on, but I've been known to turn it on at 85 when it's been particularly warm.  It won't be long, though, before it'll have to be on all the time.  Until next time!