It's hard not to go into sugar shock.  Hahahaha.  Recently, I saw a message on a co-worker/friend's Facebook page about a whole mess of Cheetah kittens at Metro Richmond Zoo in Virginia.  On March 21st, Milani gave birth to 2 males and a female.  On April 1st (perfect day to have Cheetahs born <grin> ), Vaila gave birth to 7 kittens.  7!!!!  That only happens 1% of the time.  Most litters are around 4 or 5 and even 5 is getting a bit unusual.  Unfortunately, 2 did not survive, but the remaining 5 are thriving.  But they weren't done yet.  On April 2nd, Wiay gave birth to 6 cubs, which only happens 8% of the time.  Only 5 of those survived.     There must be something in that Virginia air, though, that is causing these larger litter.  The National Zoo in Washington DC has a breeding program for Cheetahs and the facility is in Virginia and they've been having larger than average litters, too.

Breeding Cheetahs in captivity is a difficult task.  In the wild, it's the females who decide which males they are going to mate with and they can be fairly picky with who they want to spend some quality time with.   Only about 18% of cheetahs in captivity breed successfully.  When I worked as a volunteer at the Phoenix Zoo in the early 90s, they were trying to get theirs to breed, but were unsuccessful so they had a program called Cheetah Watch where basically you'd sit on the hill overlooking their exhibit and watch them and take notes on their behavior and such.  It was a popular program so I never got a chance to participate.  Eventually, though, their Cheetahs did produce some babies.  So anyway, because the females decide who they're going to mate with, zoos have to have a number of males for her to choose from and most facilities don't have the room to do that.  At the time, the Phoenix Zoo had two adjoining exhibit spaces where they kept them.  The female was in one yard and the males were in the other.  There are 3 facilities that have had huge successes in breeding them, but they have a separate location from the main zoo for their breeding program and the public is not allowed there, which is a real shame, but I guess I can understand the reasoning behind it.  Cheetahs are shy and somewhat timid animals and by having too many people around it stresses them out and it might affect the breeding program.

So, anyway, the Metro Richmond Zoo has some webcams set up in the dens of their female Cheetahs and I had forgotten about it until I saw it on my friend's Facebook wall so I had to check it out, of course.  Man, what a time sucker!  hahaha.  I could watch them all day because they're so cute!  And, well, I really like Cheetahs and even if there weren't any babies I'd still watch it.  But I'd like to share some screen captures I got.  Just so you can share in the cuteness. 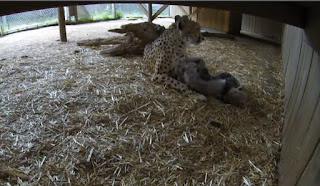 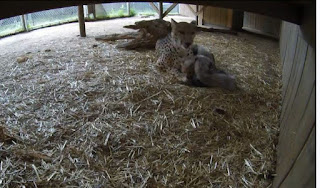 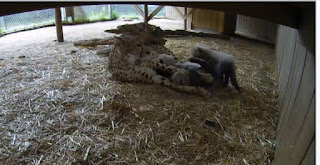 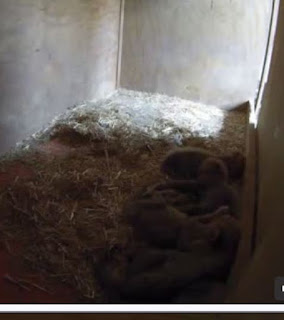 So cute!    I just checked the cam again and there was Vaila and her kittens are more spread out 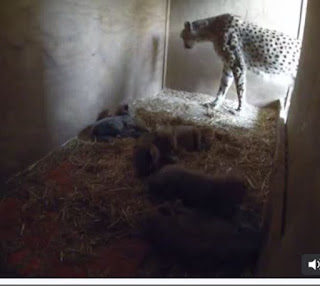 The Phoenix Zoo currently has 3 male Cheetahs that are brothers.  In the wild, the females are solitary unless they have babies, but the males form groups called Coalitions.  Usually they're brothers, but occasionally they will accept a non-related male into their group.  Unfortunately, these ones are not part of any breeding program, which is a bummer.  Our last two, also brothers, weren't in the program either.  There's one other facility in Arizona, Wildlife World Zoo, which is in West Phoenix, also has an unrelated male and female pair that they imported from a facility in South Africa.  Since they're housed together, only time will tell if they end up producing any babies.  WWZ doesn't participate in the Species Survival Program, but they don't do anything to prevent breeding.  Those 2 have been at the zoo for a couple of years now, I think, and I have yet to go out and see them.  I just don't really like that place.  It's dirty and they don't enforce the No Smoking law so you see people walking around with cigarettes.  One of these days, though, I'll go see them.

Well, we have officially had our first triple digit temperature.  Yesterday the official high at Sky Harbor Airport was 101.  Yikes!  It's "only" supposed to reach 98 today, but something tells me it's going to be above that.  It's too soon!  It's supposed to cool down for a couple of days this weekend, but I'll believe it when I see it.