Lotsa Rain and a Ceiling Collapse...

How's that for an attention getter?  It was quite an interesting weekend.

Recently I think I may have mentioned that my mom wanted to go look at getting a new refrigerator so she and my brother went on his day off the Thursday before last.  I think she was looking to get another side-by-side like the one she brought with her from Payson when she moved in with us.  Well, it's not what she got.  In fact, she got a refrigerator I've always wanted...a freezer on the bottom kind.  Yay!  They finally delivered it this past Friday but had to wait about 12 hours before putting anything in it so it had a chance to cool down.  Man, I LOVE this thing 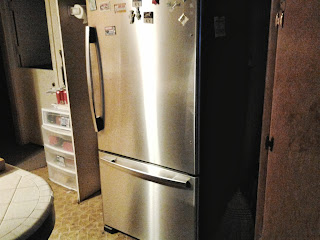 It has shelves in the door that are deep enough to put a regular gallon jug of milk in it.  My mom said that my brother had asked for a drawer (it has 3) to put his breakfast stuff in it then said I could have a drawer, too.  I had been thinking of asking if I could have one to put my lunch-making stuff in since I usually make my lunch at the breakfast bar in the lower left corner and my lunch boxes (bento stuff) are in that white thing to the left of the fridge (just the top one) so needless to say, I jumped at the chance and quickly moved my stuff into it.  Now I don't have to walk back and forth if I forget something, which I often do.  This refrigerator is taller than the old one but it's also deeper so guess what?  I keep hitting my arm on the handle.  There isn't much in the freezer yet and if you open the freezer then try to open the refrigerator afterwards it won't open right away so I have to try to remember to open the fridge first and then the freezer when I need to get my ice packs out for my lunch.

On Sundays my mom and I go to breakfast at a nearby Denny's before doing our weekly shopping.  We've known since April that they would be closing to remodel.  They need a new roof, new ceiling and pretty much a whole new interior.  This was very evident yesterday.  We usually like to sit at a booth by the window, but only if the window isn't obstructed by something painted on it.  We got there yesterday and all the window booths were taken up and some were closed because of leaks so we chose one where I could still see out the window.  When a booth opened up, one of our regular waiters said he'd get it cleaned up so we could sit there and I said that was okay because we liked an unobstructed view and that window had paint on it.  No problem.  Well, a couple of older men came in who are there weekly as well and they sat at that booth.  A few minutes later they moved to a different table because the ceiling had started to leak.  It started out as a drip but soon it was a steady stream.  I kept looking up at the tile because it was starting to bulge and I had a feeling it was going to collapse.  I was going to take a picture of it, but I'm still learning the ins and outs of my newest phone (just got it thursday) and didn't get a picture before it fell but I got it just after. 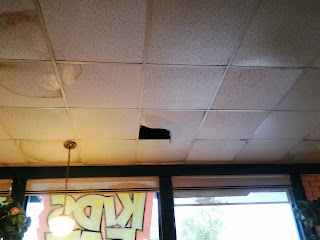 If my mom and I had agreed to move there, it would've fallen on her head because she would've been sitting on that side of the booth.  I'm glad we didn't move.  Anyway, they're finally going to remodel the interior starting next week so my mom and I will have to go somewhere else to eat or just eat at home.  We'll see.  This Denny's has been there forever and it's going to look VERY different when it's done because they're doing stuff to the outside, too.

Well, I'd better get to work.  Before I do, though, I have a small gripe.  There is a scrapbook supply website I like to buy my travel scrapbook stuff from.  I hadn't looked there in awhile so did on Friday and saw they had a paper/die-cut set for the Grand Canyon. 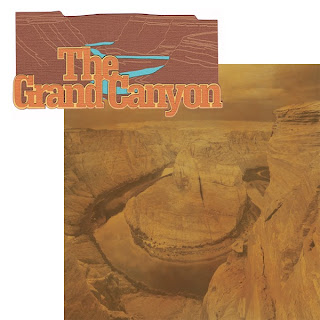 It's a very nice set except for one thing...the image on the paper?  That's Lake Powell.  I think it's called Horseshoe Bend or something.  So, people, if you're going to sell stuff that is for the Grand Canyon...please make sure it is actually the Grand Canyon shown in the picture. 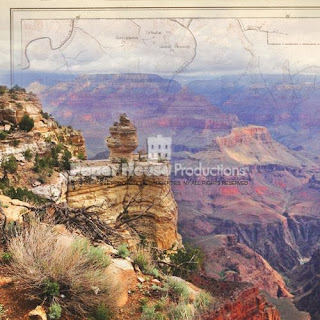