The cost of the hobby...

No, this isn't going to be a post about how I never seem to have money when cool new DAH colors are released...even though they did just release two new colors that I really want...bay roan and flea bitten gray.  No this is more about...I guess you can say it's about Supply and Demand and people "taking advantage" of that.

Now, don't get me wrong.  I do believe everyone has the right to charge what they want for the models they buy, especially if it's a model in high demand and limited quantity...I just sometimes wish they wouldn't do that.  Take Valiant, for example... 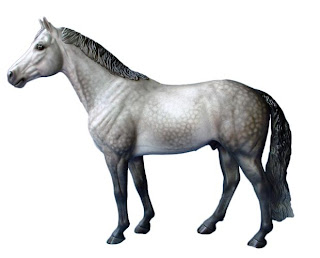 He is a special run from Just About Horses (man, I miss that magazine) and only about 350 were made.  He's on the Idocus mold, which I conga, but I have yet to see him sell for less than $225 and never with a time pay option.  I don't get why people feel the need to charge so much more for a model than what they actually paid for it.  But yesterday I saw a more up-close photo of him and I've decided that I don't really like his dapples.  They look a little too fake-ish to me.

Unfortunately, my brother is one of those people who would charge more than he should just because he has a model that is a variation of the regular run and because he has the box.  He thinks he could ask for more just because he has the original box.  I tried explaining to him that the box itself isn't going to be worth much with the model since the model was removed from the box and displayed so it was not an MIB or NIB.  I told him he would have to disclose the fact that it's been displayed and he said he didn't have to and I told him it was dishonest.  He didn't seem to grasp that concept.

Another example is when I was at my local dealer on Tuesday picking up Snowman, we were talking about Breyerfest and how I wanted to go.  They really encouraged me to go and said I should buy a ticket "just in case" and I could always sell it if it turned out I couldn't go and that if I did that I might even make a profit.  I told them I wouldn't do that and their response was "Well, you could."  I don't know.  When I was younger and Garth Brooks was in his prime I had 3 tickets to his show and they were, like, 14th row on the floor.  My dad said I could sell them for a profit because the money I made would last longer than a couple of hours of enjoyment at the concert.  Why does everyone think money is the most important thing?  Yes, it's VERY important, but it's not THE MOST important.  <sigh>  Maybe I'm an idiot for not being like everyone else and getting what I can, whenever I can.  I'll be the first to admit I have expensive tastes.  I have expensive hobbies with the model horses and photography.  But what can I say?  I grew up with a friend whose family had more money than mine and I got to enjoy going out with them.
------------

I had to stop because I'm training on new stuff at work and I wasn't going to make my co-worker sit there while I finished my entry so it's now 2 1/2 hours later.

Anyway.  I guess...like I said, I know people can charge whatever they want, but if they really want to sell horses they aren't doing themselves any favors by setting a price so high.  No, I know I don't have to pay the high prices and it's up to me to decide how much I want to spend on any given horse, but it sucks that I have to choose sometimes between having a few dollars in my bank account versus a model I don't really need but would really like.  I won't get into what I think of the people who buy multiple models to turn around and sell for a profit.  hahaha.

Speaking of my Breyer dealer, I found out on Blab last week about a new model that is due out in early October. 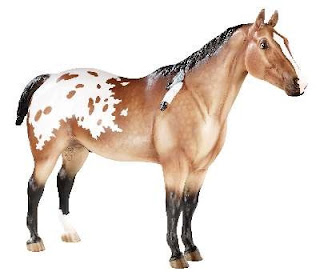 It's an Indian Pony on the Appaloosa Performance Horse.  I have two others on this mold and I like it even though I don't have more than the 2.  The ones I do have are older...Appaloosa Performance Horse from 1974-1980 (probably got mine closer to 1980) and Diamondot Buccaneer from 1996-1997.  A couple of on-line dealers are doing pre-sales of it and apparently there's a chalky version of it that will have more Native American markings such as the war paint.  So I sent a message to my dealer via FB to ask if they knew about him and if they're going to get him or they can get him.  Hopefully they will because I really like it.  If I have the ability, I'll probably get both versions, but I'll be happy with either one.  It's rumored that 1 in every 6 will be the chalky version so how many my dealer will end up with will depend, I guess, on how many cases they get in.

So, I have a pen obsession.  It's better than it used to be because I used to be in the hospitality industry and it was easier to grab pens that were left lying around.  I used to have probably 75 or so just from picking them up at places where I worked.  One resort, for some reason the maids would have a bunch of different ones and would leave them lay around in the linen closets where we got our towels from and sometimes they'd just end up in my pocket.  hahaha.  Surprisingly, I don't have any pens anymore from any of the hotels/resorts I used to work at.  hahaha.  But I have newer ones.  Mostly San Diego and Las Vegas 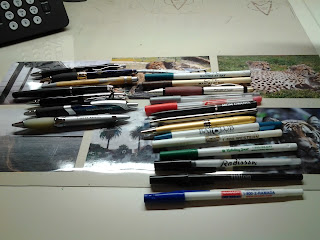 Some of them I use in my story writing while others I just have.  Hahaha.  The ones on the left are from Scripps Institute of Oceanography, Sea World, San Diego Zoo, Discovery Cove (got that on Ebay) and Seattle.  The ones on the right are from hotels I've stayed at or have found different places, but mostly ones I've stayed at.    The gold pen in the middle is from the Mirage in Las Vegas and is a really nice pen.   My co-worker brought that back for me and it's my every day work pen. The one below it is from the Bay Club Hotel in San Diego and I really like it because the pen is teal.  Not the ink, but the pen tips.  I've only stayed at that hotel once, but I love the pen.  The one above the gold one is from the Venetian in Las Vegas and I just got that on Saturday from a friend who'd grabbed me a couple when she was visiting family over the 4th of July.  She said everywhere she looked for pens they were out, but I think she just doesn't know how to look for them or get them.  Oh well.    The Venetian pen is really skinny and metal, which is unusual since most casinos put the nice pens in the rooms and the ballpoints in the public area.  The MGM pen is a good example of that.  The "public area" pen is the grey ballpoint that is just above the red ballpoint from the Rio and the one they put in the rooms is the black one below the red one.  Not sure how I ended up with 2 Mandalay Bay pens in different barrel colors and I don't know what happened to my Bellagio pens.  I had room pens only and both disappeared.  The Monte Carlo only had regular ballpoint pens for both the rooms and the public areas so the one in the picture is one I bought at a gift shop.  All of the regular ballpoints I got from my 2 stays there were chewed up pretty good by one of my kitties who likes to chew on pens...usually while I'm using them.  hahaha.  Silly kitty.  Anyway, I've stayed at Bellagio, Monte Carlo, Mandalay Bay and MGM plus a couple of off-strip chains.   I know you just loved reading about my pen collection.  hahaha.

I hope everyone had a nice weekend.  Mine was good.  I got to see my friend Lori for a few hours on Saturday.  She was in town with a co-worker of her sister's for an NFL game and the other girl let Lori borrow her truck so she could come see me.  We drove around for awhile.  We went to the resort we used to work at then drove around and looked at some of the fancy houses in Paradise Valley.  We saw a convoy of Google cars out taking pictures.  That was pretty cool.  Lori said she wanted that job and I said she'd have to move to California since Google was headquartered in Northern California and she said she could handle Northern California.  I then showed her where I worked and the houses with horse property that I like to drive by and look at.  At one point we decided maybe we should get some dinner and pulled over into a shopping center so she could text the girl she'd come with and ask if she wanted to go to a vegetarian buffet near where I lived.  Andi said she wasn't hungry and was watching college football and told Lori to enjoy herself.  As we sat there I happened to look up and see a glowing red sign across the parking lot.  I asked Lori if it was a Cold Stone Creamery sign and she said yes and so we went and had ice cream for dinner.  hahaha.  I had a yummy Chocolate Peanut Butter Cup concoction.  It was chocolate ice cream with a swirl of peanut butter and had peanut butter cup chunks.  Wow.  Eventually, though, she had to take me back home and take the truck back to Andi.  It was really nice of her to let Lori use it so she could come visit me.  It's kind of funny, though.  Lori and I have seen more of each other in the past 11 months than we have in the previous 10 years.  She only lives about 6 1/2 hours away but she isn't really all that conveniently located.  I'm not going to drive to St George alone and while she lives only 2 1/2 hours from Las Vegas, I don't really want to fly to Las Vegas then spend the time in St George.  She likes visiting Arizona, but doesn't always have money to make the drive to Arizona.  She agreed, though, that it's been nice seeing each other so much (even if it was because of family issues) and said we should try to make more of an effort to get together when money allows.

Well, I guess that's it for now.  It looks like my work load might actually be increasing at work, which is good.  I went home early two days last week because of no work and I'd rather go home than sit around and do nothing, you know?

**update**  I found out that the little silver Venetian pen is actually refillable and uses a refill that some of my others do.  Hurray!
Posted by Brenda at 12:36 PM