Yes, it has it has good points...no blizzards, no mudslides, no tornadoes or hurricanes.  We are home to one of the 7 Natural Wonders of the World and have beautiful places to visit such as Sedona, Painted Desert and more Indian Ruins than you can shake  stick at.  What we lack in natural disasters, however, we more than make up for in unbearable weather.

We were  fortunate this year in that it didn’t  start getting really hot until the end of June.  Well, now the surface of the sun I call home, also known as Arizona, is making up for it.  Look at this graphic for proof 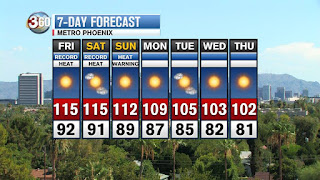 Our normal for this time of year is 105.  Today we matched a record.  If it hits 115 tomorrow it will be setting a new record.  Yeah.  That's  not the kind of record I'm  looking forward to.  Now, try doing that heat without air conditioning...yup.  I got home from work yesterday and noticed it was a little warm so I  looked at the thermostat and it read 84.  And it was quiet.  As in the thermostat said it was on, but I  couldn't  hear it going.  Not good.  I always say it's  good we only rent because we don't  have to pay major repairs, but it also has its  drawbacks...mainly waiting for the landlord to respond to your texts then calling the repair guys out.  That didn't  happen  last night and by the time we went to bed it was 90 degrees.  I probably woke up 4 times last night and had a hard time getting back to sleep because it was so hot.  During one of the times I  was up my poor kitty Temecula was panting.  He's  a short-haired cat, but it was just super hot.  Abbie didn't  seem to be quite as bothered by the heat although her body was pretty warm to the touch, too, and she meowed every time  I  touched her.

Got home today and the thermostat said 97.  Not.  Good.  Not even a little.  My mom said the repair guys were here for an hour then got called away and sid they'd  be back, but never did.  My brother got in touch with the landlord who claimed the repair guy said the a/c wasn't  getting any power and suggested flipping the circuit breaker.  Would you believe that did the trick?  Gaah!  The temperature is slowly going down, but it's  got a ways to go.

Did I  mention how much I  hated Arizona?

I don't  want to even think of it being 115 degrees for the next 2 days so I'll  share a picture of my fuzzy butts Temecula and Abbie.  Abbie is the grey tabby in the front.  She's  TINY.  This picture makes her look about the same size as Tem, but they're  not.  He's  twice her size.  And if you've  been  following  my blog for awhile you might notice the tabby is a different color than the one I've  shared here before.  I don't  know  if  I  mentioned it before, but I  lost my red tabby Royal back in January.  He was diagnosed with diabetes and the vet believed that was just one of his medical problems.  I couldn't  put him through daily insulin injections and trips to the vet every two weeks so I  made that tough decision nobody wants to make.  I still feel guilty about it, but I  know deep down it was the right choice. 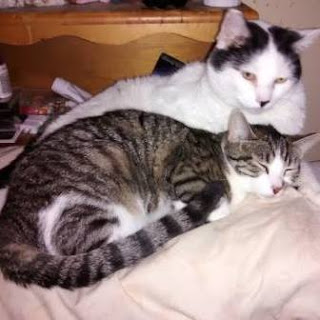 I hope everyone has a great weekend.  My brother is supposed to be going to a music festival in Irvine with a buddy of his so my mom and I  might go have dinner at our favorite restaurant Saturday.  We haven't  eaten there in  more than a year.

*just a quick little note*  98% of my blogging is done on a 7 inch Samsung tablet and sometimes it has a mind of its own and it often results in misspelled words.  I  usually proofread what I've  written, but sometimes I  miss something here or there.  Now, you might think it's  no big deal that it says "tje" instead of "the" and in the grand scheme of things, it doesn'tm but it bugs me so if I  see it I have to fix it.   And the last sentence of this post...it had originally said "we haven't  eated there i more than a year"...that one is a bit embarrassing  to me.  The missing 'n' for 'in' is no big deal, but the 'eated' is the biggy.  Hahahaha.

Oh, and the heat has claimed another victim...me.  Yesterday  I  was out looking for the horses and even though I  spent most of the time in my air conditioned car, when you pair that with not having a/c in the house and the high temperature  in general...I woke up this morning feeling under the weather so I  stayed home.
Posted by Brenda at 6:41 PM