A year or so ago I had a "Darn you, Stone" post, but I've never done one for Breyer. Never had a reason to. Until today. Yesterday I blogged about the new Stablemate Collectors Club they'll be starting up in the new year. That's fine. It's inexpensive. But then today someone on Blab posted a picture of another goody. Or Goodies, as in plural. The first is the Vintage Club. I've never been a member of that club because it seemed too expensive to me and I didn't like the models they had in the past. But then, I saw the offerings for 2016 and it's full of all kinds of wonderful 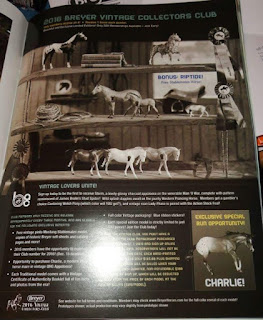 I really like the 3 Cantering Welsh Ponies and definitely the Lady Phase on the 2nd shelf.  Initially I also liked the black appaloosa Man O' War, but the more I look at him the less I like him because of the white mane and tail and the white socks.  It looks off-balance.  The article says he's painted reminiscent of Stud Spider, but Stud Spider didn't have all that white.  Anyway, unfortunately the CWP models are Gambler's Choice so you won't know which one you get until it arrives.  Well, I want all 3!  Ugh!  The Charlie is a neat addition, but I'm not a huge fan of this new mold and will likely sell it along with the Western Prancer on the top shelf, should I decide to join.

Also leaked out, was the final model for 2015 Premier Club 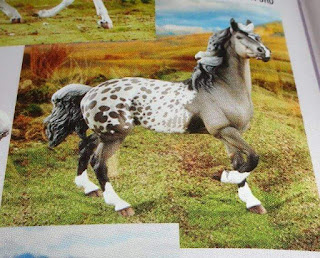 Yeah, I'm not a real fan of it right now.  The pattern is a little odd to me, but I don't know yet if I want to try to find a buyer for him.  When I saw the offerings for the Vintage Club I figured I'd join that one and not the Premier Club again, but then the first model for the 2016 PC was leaked and I really like that one 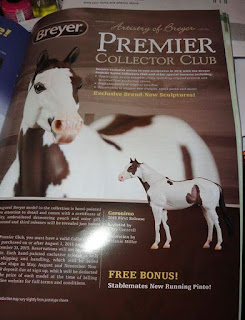 So what do I do, then? I might be able to afford both the PC and the VC, but I don't know if I want to attempt it. Not with me trying to go to Breyerfest next July. It's a hard choice, really. On the surface, since you don't know what each PC model is going to be until a short time before its release, the VC seems like the best bet since those are all revealed ahead of time.

I still have time to decide. Neither the PC nor the VC have been opened up for joining yet so I will think on it some. But really, the VC has more that I'm interested in. Oh well. I'll figure something out.

I've been goofing off much too much lately and need to do more work and less playing. I hope everyone is having a wonderful Wednesday.
Posted by Brenda at 9:30 AM