Okay.  So.  I got a new car back in October, right?  My wonderful little Nissan Versa Note SV.  My very first new car.  It still smells like a new car much of the time, too.  I love my little car.
I was so happy to make it through that first day of driving without anybody hitting me, because you just know new cars are magnets for idiot drivers. When my parents bought a new pick-up truck years ago, someone hit my dad while he was driving to work the day after we bought it. So I considered it a major thing that I made it to work and home the first day with no problems. That one day became two and then a month and when I reached the 6 month mark in April, I was quite happy. No, I didn't think I'd make it "forever" without any damage, but I was hoping to go as long as I could. Well, 10 months later, that all came to a screeching halt. I was at work (still am) when two ladies I didn't recognize came down the aisle. They passed me then turned back and one of them said my name. She then said "You're the one who drives the little red car, aren't you?" A sense of dread came over me. I knew it couldn't be good. She said someone in the parking garage hit my car. He was backing into the spot next to me and backed right into my car. In front of 4 witnesses. She said he left a note so I went down there (our garage is underground) and found the note, encountering the other 2 witnesses. It was someone I see almost daily because we work the same hours. Usually he rides a Harley, but he'd had to take someone to the airport and had taken her car and drove it to back to work. The damage isn't horrible, but it's bad enough. 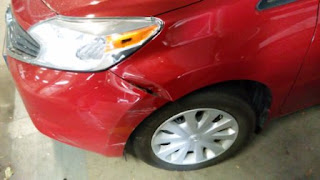 At the very least they'll have to replace the front fender and the bumper.  <sigh>  I'm so bummed.  I went from laughing and carefree about it to shaking with anger to wanting to cry and now I'm kind of numb.  There's nothing I can do about it, but I'm just sick over it.  He has already turned the claim into his insurance company so now I'm just waiting for them to get in touch with me so it can get fixed.  I live near a claim center so that will be convenient, but that's about the only thing that will be convenient.  I don't think it will take long for it to be fixed, but they'll have to get me a rental and it's just a whole lot of hassle.  The ironic thing?  I told my mom and brother that the first accident I get into with this car will not be my fault.  And it wasn't.  <sigh>  I just don't know...

Well, hopefully everyone else's weekend goes better than mine has started off so far.