An update on the Salt River Wild Horses...

It was a dismal day back in July 2015 when it was discovered the Tonto National Forest would start rounding up what they considered to be "unauthorized livestock" from forestry land and sell them at auction.  Horses that have lived in peace for generations were in danger of being chased by low-flying helicopters and sold to the highest bidder, including those who would buy them for slaughter.  It wasn't acceptable and it caused an uproar.  What the forest service considered domestic horses that had "escaped" from nearby ranches were neither that nor the animals that were destroying the environment.

For the past 5 months people have written letters, posted notices and staged protests in an effort to save these precious animals.  Celebrities were notified, politicians were informed and numerous groups were established on Facebook to help organize it all.  Initially the forest service balked at the whole thing.  They claimed they had no authority to manage these horses and were not interested in speaking with any of the groups to figure it out.  Not long after a protest at Butcher Jones, a young horse was hit by a car and killed.  "We told you that would happen."  More recently, a 12 year old mare was found dead by gunshot.  I "blame" much of the publicity they've gotten.  More people know where to find them.  We still don't know if she'd been injured and someone considered it the humane thing to do or if she'd been targeted to prove a point.  E-coli was found in the water at Butcher Jones. "The horses are the reason for the e-coli." some people were saying because they go bathroom in the water.  Actually, they don't.  They never considered it could be the children in diapers who play in the water or the other people who're too lazy to walk to the bathrooms.

The politicians were in recess when all of this was going down and it was said only an act of Congress could save the horses.  Many people were suspicious of the timing.  Myself included.  But fortunately people were able to get in touch with the right people and initially the round-up was going to postponed until Congress was back in session.  The Salt River Wild Horse Management Group filed a lawsuit and a petition to stop the round-up and the forest service responded by postponing it for 120 days.  Some people worried it was because they thought not as many people would be around to protect them in December, but what they didn't realize is that people who follow these horses are around all the time, including during the winter.

The 120 day postponement was rapidly approaching.  Next Friday, as a matter of fact.  What was going to happen to the horses?  Our answer came today...

And the official notice posted
http://publicnotices.azcapitoltimes.com/search/detail.aspx?detail=10679762

They still aren't 100% safe and won't be until they receive official protected status, but this is a step in the right direction and I am grateful for it. 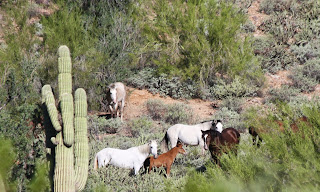