Aside from how expensive it's going to be for me with joining all 3 of the extra clubs (Vintage, Premier and the new Stablemate) for 2016, there's starting to be "leaks" for what new models are coming down the pike for us rabid collectors and there's many of them I want to have. Fortunately, however, I don't want ALL of the ones we've seen so far and so I will be focusing on the ones I do want.

We will go with the non-horse model. A very cute little donkey on the Brighty mold called Hickory Hills Wall Street 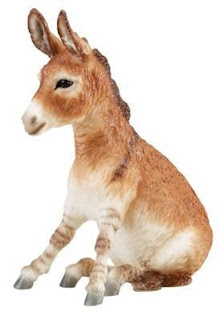 I don't have anything on this mold yet so he will be my first. I don't know if he's going to be limited or not, but my dealer has started a "Call List" of people to contact when he comes in and I'm on the list. They expected to get him within a couple of weeks, before Christmas, but so far I haven't heard anything. Wall Street is a portrait mold of a registered Mini Donkey owned by Hickory Hill Donkey Farm
Next up is the beautiful 2012 Olympic Gold Medal winner in Dressage, Valegro
Breyer really nailed the pose with this one as you can see...
The next horse I am looking forward to is on the Adios mold and is called Cherry Creek Fonzie Merit and is apparently a portrait horse of one that lives in Canada. Not real sure of the breed because they're calling it a Canada Horse 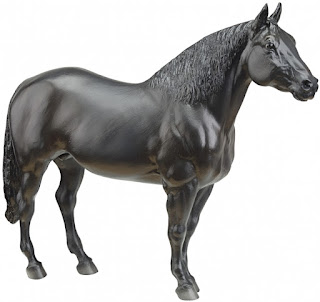 Apparently 2016 is going to be the Year of the Portrait Horse because I saved the best for last... 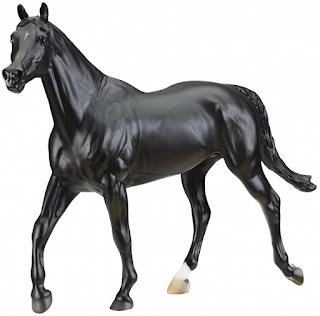 The 2014 Horse of the Year winner and main mount for Olympian Beezie Madden...Cortes C
I am beyond excited about this one. I'm such a huge fan of Beezie's and have been for a number of years. I love to see the passion for her craft on her face, whether she's just done a fantastic job in the Stadium Jumping arena or going out on a trail ride near her farm in New York.

I don't know when any of the models will be out, other than Valegro is supposed to be released to US buyers in January. He's currently available in the UK, which makes sense since he's their Olympic Champion. I'll need to find more room on my shelves, that's for sure. Maybe move my bed out of my room and just put up tons of shelves and sleep on the floor. Hahahaha.

In other news...today is my unit's Christmas party. I'm not there. I decided not to participate this year. They're doing a White Elephant gift exchange and I just don't enjoy that atmosphere so I'm doing my own thing. Oh well. I think I'm the only one not there other than the people who're off today. No big deal. I don't make it a habit of skipping unit functions. Also, they're having a dessert pot luck and I know I'd have a hard time not partaking.

Speaking of which...I mentioned in my last blog post about the drastic changes to the Weight Watchers Program. I said I would commit to doing it for one week, but that lasted all of one day. As I had predicted, it was too restrictive and felt more like a diet. I figured out the points for a typical Saturday breakfast and lunch for me and ended up with only 6 points for dinner. I know the new plan is encouraging more healthy eating, but by increasing the points of so many foods because the formula for determining the points has changed, it eliminates the ability to have anything other than fruits, veggies and lean proteins. I might as well join Jenny Craig or NutriSystem and eat their cardboard food. Other people might be able to cut way back on most everything they enjoy, but I can't. I know from experience that if I'm deprived of things I'm going to end up bingeing on them and that's not good. So, I'm still going to follow the program and I'm still going to attend meetings. I have my older points calculator and several helpful websites so I have no doubt I can continue to follow the Points Plus Program that has enabled me to lose 16.6 pounds so far.

Well, I think that's it for now. I hope everyone is doing well. We've had some really low temperatures. Lower than even Chicago and New York. Everywhere I look I see blankets and sheets covering plants because we've had freeze warnings most every morning this week. It's supposed to warm up a bit this weekend, but then go back down next week. Yay!