The day the Wild Horses got me into trouble...

Or maybe it was my scanner...
Yesterday I headed off for work since being out sick Monday and Tuesday, but when I stopped to get some gas and some breakfast, I was feeling a little jittery and light-headed so I decided to take another day off.  I should have just turned around and went back home, but I didn't.  That was a mistake.
After checking for horses at the first spot, I decided to go to another and just relax.  Maybe have a little nap.  I parked.  Turned the engine off.  Reclined my seat a bit and just relaxed.  I guess about an hour passed and I woke up to the sound of my scanner making strange noises.  I looked at it and it kept turning off and on.  That was unusual.  Well, I should get moving anyway so I turned the key and...nothing.  Uh oh.  Tried it again.  Still nothing.  I waited awhile, but got the same results so next step would be to call roadside service, right?  Hahahaha.  Silly, Brenda, don't you know you're in a bit of a canyon?  You're not going to get cell service there.  Well, the main road is nearby so I could walk up there and see if I get cell reception.  Nope.  Silly, silly, Brenda.  So I sat down on the guardrail and watched for a deputy sheriff to drive by that I can flag down.  There's a station about a mile and a half away and I see them driving back and forth all the time.  So I wait.  And wait.  And wait.  Murphy's Law, don't you know.  There's never a cop around when you need one.  Well, my next option was to take a risk and ask someone at the rec site for help.  A mini van had pulled in and there were two women there.  Yes!  I walked over and asked them if they got a signal on their cell phone.  Neither one had a phone, but their husbands would be back shortly and maybe one of them could help.  Fortunately, they had a set of jumper cables so we tried to jump start my car.  Nope.  Wouldn't even try to start.  First guy had no cell service, but the other guy did so I was able to call for assistance.  Have you ever tried calling for roadside service when you don't know exactly where you are?  All I could do was tell him which rec site I was at and the name of the road it was on and what major landmarks to use.  Oh, and I couldn't give them a cell number as a call-back because I didn't get any service.
While I was waiting, I caught some movement in the trees and then a couple of wild horses came trotting up from the river then off "into the trees".

The tow truck came all the way from Sunflower, which is a good 30 miles, but he still made it within a reasonable time frame.  Tried to use a portable unit to jump my car, but my battery was dead, dead, dead.  So he used the truck to do it and it started right up.  Yay!
Once my car was running I went to Burger King to get something to eat then decided to check the one spot again before going elsewhere. As I came around the back of the rec site I saw some people standing around and that's when I saw them. It was Shadowfax and his band. I'd heard they'd come back down so I was excited to see Diamond. I can't believe how big he's gotten! He's huge and he's only about six months old. I took some pictures with my big camera, but only got this one with my cell phone 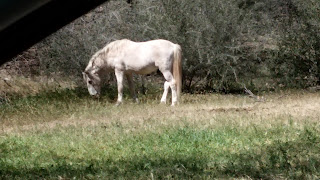 It was worth everything I went through yesterday to see them and to tell people about them that we're seeing them for the first time.

Now today is a different day. A different story. Still sick and now I'm in the hospital. Blood pressure is too high. The doctor might release me tonight, though, so I'm just hanging out in my room. I have a roommate and her husband is here with their dogs. I'm ready for today to be over with for sure.

Oh, I guess I should've said that my scanner wasn't the reason my battery went dead. Not entirely. My headlights had been on and when I parked it was light out so I didn't know they were still on and that's what drained my battery. Also, while I was back at my car waiti for the tow truck, FIVE deputies went racing by. Of course, they were headed for a call so they wouldn't have been able to help, but... Hahana