I don't know if I mentioned it before and I'm too lazy to go back through previous posts to see, but my unit is moving...again.  We've always known it was a possibility, even when we were moving to our current location almost 2 years ago.  But we went from "We may be moving or we may not." to "We will be moving in May or June-ish".  That announcement I missed because I was out of the office and nobody told me.  But then May or June-ish turned into "We're moving April 8th".  I missed that notification, too.  We've known the location of our new space since the confirmation that we were moving to, but not what our furniture would look like or even the exact spot.  We didn't know if we were going to get actual desks or if it was going to be like a bull pen situation where there's just a bunch of work stations set up.  Apparently that's what our parent company is pushing for everywhere.  The problem with that, though, is that my unit has rather sensitive duties that other units/associates aren't privy to.  We pay the bills and need some privacy and couldn't see how putting us in a large, open area would protect the privacy of our vendors like their tax ID numbers.  We sometimes have a hard enough time getting that just so we can pay them.  Anyway, our supervisor was very vehemently against bull pen seating and assured us he was fighting against it.  When I had a 1 on 1 with him last week I told him to tell them to send us back to Pima, where we worked for 6 years before our current location.  Our desks were still there and were mostly unoccupied.  The people who were taking up a couple of the locations could easily move back to their own units as there's no reason for them to be in that area.  Anyway, he said he planned to use that as a last-ditch effort.

Well, yesterday we got the seating chart.  All but 4 of us are getting regular desks and while they're modifying a bull pen area for a group within our unit, I'm glad I don't have to sit there and can have my own space. 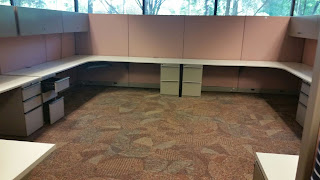 There'd still be room to put up pictures and they have locking drawers and fairly tall walls.  Better than what was being described to us.  This is where Recovery and some of our Vendor team is going.

What the big surprise is what our desks look like.  I'd overheard someone say they were larger than what we currently have, but what I didn't expect was how much larger.  Here is my current desk... 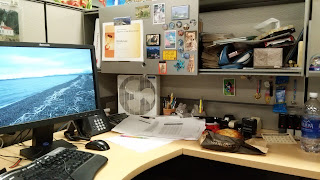 Not all of it is viewable because I didn't want to go into the "hallway" to get both monitors and the rest, but it gives you an idea of its size, I'm sure.  It's not huge.  But the new desks...boy howdy! 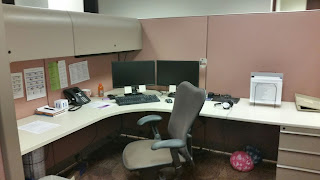 What AM I going to do with all that extra space?  I already see I can put my Keurig in the corner to the left.  I may want to get a little cover for it, though.  I still don't know that I'm allowed to have it, but it's been about a week now and I haven't been told it's contraband.  And it looks like whoever is sitting there has some sort of fan or air filter under the desk.  The only problem I can see is that the outlets aren't up at desk level like we have now since our computer towers sit on our desks.  In fact, I can't even see the tower in this picture so maybe it's one of the older ones that sits on the floor.  My Keurig has a short plug so there maybe a small issue with that.  I'm sure I'll figure something out.  Anyway, the above picture is not my desk because someone is currently sitting there, but it's what the desks look like.  Those are BIG desks.  We don't need that much room, but I think I will survive.  hahahaha.  So, we're moving in about 2 weeks.  This will be the...6th?  7th? time I've moved since starting in 2001.  I lost track.    Currently our neighbors are the CAT (catastrophe) team and New Loss and while we know New Loss is moving with us, we don't know where to.  Even they don't know.  Their manager knows, but for whatever reason she hasn't given that information to her people.  Maybe she wants to avoid what my unit did...spend the morning going over there to look it over.  Who knows, but some of them are a little annoyed they haven't been told yet.  I'm just hoping they're not super close to us because it can get annoying listening to them on the phones sometimes.

So, yesterday some recycling plant near the airport caught fire.  Last I heard, they didn't know what caused it, but they may have found out by now.  It caused a lot of smoke and made the sky look cloudy.  I live about 6.7 miles from the incident and could see the smoke pretty well from the house 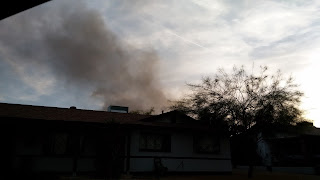 Then I went to get dinner and went an additional 2 miles north of the fire and it was still pretty noticeable. 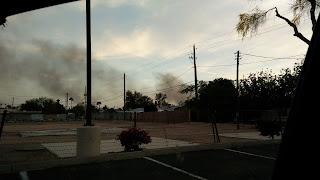 I couldn't really smell anything burning, but other people said they could.  I don't know if it's out yet because recycle plant fires tend to burn for a few days due to all the fuel plus we've been having some gusty winds which make putting out the fire difficult.  There's at least one gas station in the area and the local news spoke with one of the workers on the phone and she was concerned that the fire would impact the gas station and was waiting to be told to evacuate, but I don't know that that ever happened.  Okay, so I just looked it up and the fire is 100% but there's still some hot spots so it's still burning a little.

Well, I guess I'd better get back to work.  Yay!  hahaha.  Until next time.