Because I couldn't motivate myself to make lunch for work today, I had to go out to get something that is more nutritious, even if it's only slightly so, than what's available in the snack machines here at work.  Having decided on McDonald's, I went through the drive-thru and as I came out the other side, it had occurred to me that it'd been awhile since I'd driven through my "horse neighborhood".  I was in no big hurry to get back to work and I was "right there" so why not?  It's a gorgeous day today.  Not to hot.  A nice breeze.  Oh wait.  Scratch that.  It wasn't breezy, it was actually quite windy.  It was still nice out, though, and soon enough I'd have to go back to the office where the thermostat is kept too low and we get froze.  Appreciated during the hot summer months, but not so much in the winter.  Most of the time when I visit this neighborhood, I don't see anyone out on horseback, which is a shame.  They have some trails that go between houses... 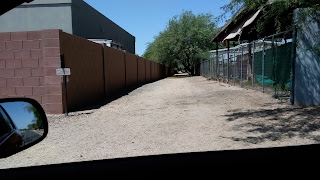 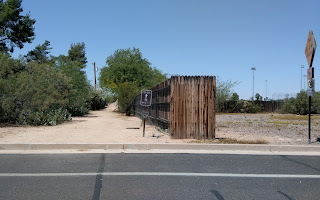 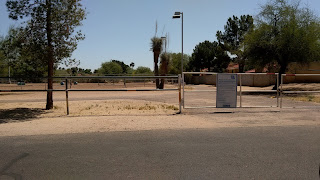 Surprisingly, I've only seen the park used 1 1/2 times in the 2 or so years since I found out about this place.  Now, I say a 1/2 time because I didn't actually see her using it because she was on her way to the hospital after having a fall.  I saw and heard (through my scanner) the aftermath.  The police investigating the fall since it happened on city property and an officer going to her house to notify anyone who might be home of what happened.  I don't know how seriously she was hurt, but hopefully not too bad.  I also heard on my scanner them requesting the assistance of the mounted unit to come down with their trailer and help with the horse.  They then canceled that because a neighbor came over to get the horse.  Now, before you question or wonder, no, I don't go driving around in my car, chasing calls I hear on my scanner.  I was already in the area and curiosity got the better of me.  Two things that always jump out at me when I'm listening to my scanner:  anything to do with a horse and when a specific Tempe fire truck gets called out.  My neighborhood only has one station so whenever I hear Engine 275, I listen to make sure they aren't going to my house.  And the one time they have?  I didn't hear it.  hahaha.  I didn't have my scanner on at work that day.  Which is probably good because I would've been freaking out.  My brother thought he was having a stroke.  He was eventually diagnosed with Bell's Palsy, but at the time, half his face was frozen and he was worried so he called for a ride to the hospital because he didn't want to drive.

ANYWAY...so I drove around a bit more, taking random photos.  This house, I was hoping to get a shot of the horses, but the owner was out in the corral, doing something with what appeared to be jump standards so I took a picture of the trail sign instead 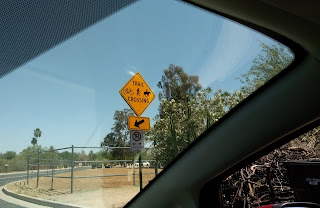 I HAVE seen someone from this house going to the park to use the arena, which is really close, but I don't know that she actually lives there because there was an extra trailer in the driveway and the 2 horses that I've seen there before were still in their yard so it may have been a friend who asked if they could come over and park on their property.

And then there's this trailer... 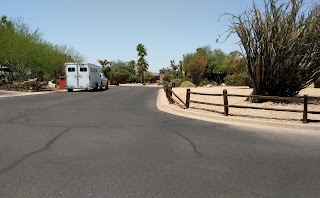 Every time I am in the area, it's there.  It's never gone.  Granted, I'm not there 7 days a week, only during lunch time, which is probably why I never see anyone at the park, but since it's hooked up to the truck, does that mean whoever owns/drives the truck takes the trailer wherever they go?  Also, I have never seen anyone using the trails.  A lot of these houses that have horse property and actually still have horses, why are they never out riding when I'm around?  That's why I'm there...in hopes of seeing horses somewhere other than their corrals...that and looking at the nice houses.  Not all of them are nice, but there are some great ones that I enjoy looking at.  Oh well.

I figure one of the reasons for there not being anyone out on such a nice day is because of the wind.  Wind causes things to move and we all know how horses react when things start moving unexpectedly.

The only drawback to my little drives is my lunch being cold by the time I get back to my desk, but today, with the weather being as nice as it was (I had both front windows down), it was worth it.

On Friday Breyer sent an email for a contest to win a Ram model. 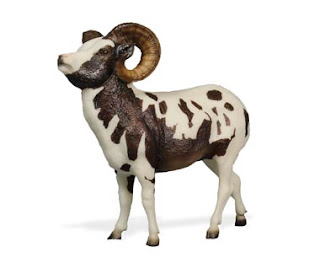 His name is Rodney and they only made 40 of them so it was a micro-run.  Since I'm an Aries and I like Bighorn Sheep, I entered all three days for him, but unfortunately I didn't win one.  Oh well.  I'll survive, I suppose.  hahahaha.  It seems like the only time I win these contests is when I am entering for someone else.

Well, I guess I'd better get back to work.  Yay.  At least it's more than half over.