Just some randomness and a small vent

Let me get the vent out of the way first. On Sunday, July 17th, I reached my 15th anniversary with the company I work for. To me, it was a big deal, but apparently I'm the only one who cares. My supervisor came by my desk on Wednesday to give me my certificate, but he thought my anniversary was Wednesday so I guess it should come as no surprise that my anniversary came and went with no acknowledgement other than the certificate. None of my co-workers knew. Nobody knew. In the past, our supervisor would bake a cake and have a special unit meeting so the person could be properly acknowledged for their milestone. I believe Wilma got a cake and special meeting for her 15th back in May. Our supervisor's 15th was in June, but he doesn't go for the attention. Normally I don't, either, but this time I wouldn't have minded. I was going to casually bring it up in a meeting with our lead today, but she is out of the office and postponed it until next week and by then it would be silly to bring it up. I don't really care about the meeting or the cake, I just want my milestone to be recognized, you know? Twice I have written an email to my supervisor asking about it, but twice I deleted it and never sent it. I'm torn between bringing it up and just letting it go, but I can't figure out a way to word an email where it won't sound whiney and greedy or whatever. I don't know.

Breyerfest is this week. Friday is when it starts. I wish I was there, but I chose not to go. I can't really afford it anyway since I'm still paying the hospital for my 8 hour stay. I've got a long way to go because I can only afford so much per month and still be able to get my other bills paid. I have too many credit cards. hahaha. I did pay one off the other day, though, and will pay another next month. That will help. A little. The fact of the matter is, even though I have a good paying job on paper, once Uncle Sam and the state are done with it, my take home pay is disgusting. Plus, I have rent and car payments. blah blah blah. Maybe next year I can go to Breyerfest. I had a trip planned for the fall to San Francisco, but I'm probably going to have to cancel it because I remembered my car registration is due the same month. Ouch. I haven't gone anywhere since Las Vegas in 2014. I used to travel quite a bit and now I don't at all. No, there's nothing stopping me from driving somewhere. That would sure cut down on costs, but I'd be limited in where I could drive to by myself so I don't bother. Oh well. Anyway, Breyer's Special Run models aren't very exciting this year. I have a pick-up person who's going to get me a couple of models, including the Surprise horse, which we won't know what it is until Friday morning. Hopefully it's a mold I like. Anyway, because it's also a NAN year for Kentucky, there's people at Breyerfest already. People write mini blogs about the trip so it's almost like being there and I watch the "Breyerfest Adventure" videos on YouTube and then there's the Haul videos. Those can be fun.

Now, I want to talk about this awesome water bottle I got off of Amazon last week. Recently I had gone to Whole Foods and ended up buying a Hydro Flask. It's made of 18/8 stainless steel and is vacuum insulated. The first time I used it at work, it wasn't a pretty sight. I had chosen to get the 40oz over the 32oz because, well, it holds more water. But it was too tall to fit under the ice dispenser at work, so I went to Amazon to find a 32oz one since Whole Foods isn't convenient enough to go back and get another. But anyway, I hadn't finished my water so I took it home and ended up leaving it in my room. When I went back a few hours later, it was still half full of ice!!! So, like I said I went to get another one on Amazon and this time I got a Klear Bottle brand because it was a little less expensive, but it had the same features as the Hydro Flask. Yesterday I tested it out, filling it with ice about 7am. 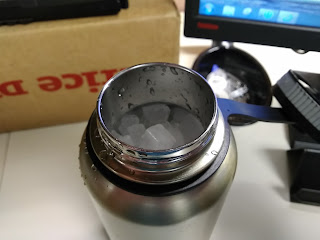 Approximately 6 hours later, it still had plenty of ice... 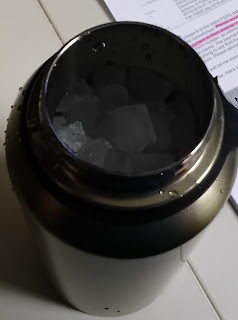 I then forgot about it and accidentally left it on my desk overnight. As of 7am this morning, it still had some ice and was still very cold

The only thing I really don't like about it is the doo-hickey that keeps the cap attached to the bottle. I doesn't bend back very far so it kind of gets in the way, but I guess I can live with that.

Our monsoon season has finally decided to show up. It used to be, the season started when the dew point hit a certain point, but now they decided on a specific date in June. As per usual during the summer, you get a build up of clouds nearly every evening, but usually it doesn't produce any storms, but last night, boy did it. While watching the news, a wall of dust came creeping in and the news even had live video of a microburst. Not up close, of course, but from a distance, which was pretty cool. For awhile we weren't sure we were going to get anything, but then about 6:30pm or so, the winds really picked up and there was thunder and finally some rain. It only lasted 10 minutes, but it's better than nothing, right? I think so.

Well, I'd better get back to work. I hope everyone is doing well and if you're going to Breyerfest, have fun!
Posted by Brenda at 9:29 AM