The Friday In July Where Brenda Gets Very Little Work Done.

Breyerfest started a bit early this year since it's a NAN year in Kentucky (even numbered years) so a lot of people arrived on Monday in preparation, either because they're showing or to take advantage of the extra people for room sales, I don't know. Most people show up on Wednesday or Thursday because Friday is the day the 3 Day Weekend starts and nobody wants to miss any of the fun. Except me. Well, it's not that I *want* to miss it, I just have a problem with the 4 hour flights and the social anxiety that goes along with traveling from Arizona to Kentucky and then be squished with 7,000 of my closest new best friends. hahahaha. Anyway, so every year Breyerfest has a surprise horse. A mold nobody knows what is until the very first Special Run line goes through at 10am and someone buys it and reveals what it is. Then, there's the additional wait to see what colors it comes in and if it's only available in matte or glossy or both. The past couple of years they've done both and have switched it up which is more hard to come by. Three years ago, the glossy was the hardest to get, then it was the matte and then it was glossy again. Well, it looks like they've done it a little different this year in that only one of the 4 colors is difficult to come by and it's in matte, which is fine because I want to glossy version anyway. I'm not a huge fan of glossy horses, but this one looks much better as a glossy.

Every year there's always speculation as to what mold will be used. They try to figure out the odds based on what has been used before, what hasn't been used before and how it could possibly tie in to the theme of the current year...Carnival/Rio is the 2016 theme. Well, a few people guessed the Esprit mold and that's what it ended up being. One in a funky, clear-ish decorator color and the other 3 in more realistic ones. 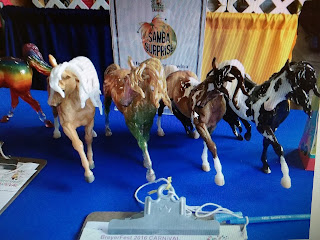 The one I want is the Tobiano that is 2nd from the right.  The photo shows him in Glossy and that's what I want.  The palomino on the left has dapples and the black Overo is very flashy-looking, but I want to Tobiano.  I prefer minimal white on my paints.  I have a pick-up person who will be hopefully obtain me that model and another one I have asked for.  Hopefully she'll be able to get it for me.  I don't know how many customers she has this year, but she has 2 people helping her so hopefully between the 3 of them I'll get the Tobiano.  If I'd bought 2 of the 3 Day tickets, I could've gotten the Overo as well, but I had forgotten you could only get one Surprise model per ticket and I wasn't depending on the Surprise being something I collected.  And I don't collect the Esprit model, but the color is something I can't pass up. 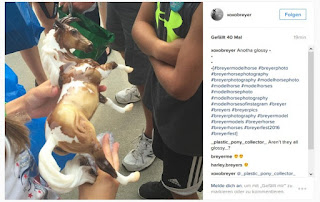 I wish model in the photo was horizontal rather than vertical, but oh well.  And then the deco is funky but I don't like decos unless it's a realistic pattern but in a fun color, like a silver dapple they did a couple of years ago 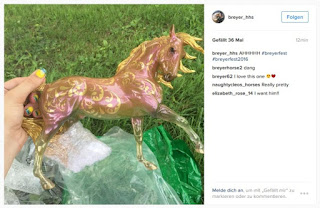 But the reason why I don't get much work done on opening day of Breyerfest is because I'm too excited to see what the surprise model is and then I get caught up in all the hub-bub on Blab and I don't get my work done.  Well, not much of it anyway.  Right now I'm on lunch break so I'm safe for another 40 minutes.  Hurray for getting an hour on payday!  I wasn't going to take lunch until 11.30am, but decided I couldn't wait the extra 30 minutes.  hahaha.

Tune back in on Monday and I'll share some neat photos of NAN that an attendee gave me permission to use.  I'd like to do it today, but I do need to actually work and blogging with a bunch of pictures from my iPad is no fun so I'll do it on Monday when I can use my work computer again.

We may already know the theme for 2017.  Someone apparently took a picture of a digital sign outside the Kentucky Horse Park that shows the theme and dates, but the picture I saw was of the display on the back of the camera and was posted to Instagram so I'm not entirely 100% sure it's correct, but apparently it's going to be Gateway to India and the dates are July 14-16.  If it IS Gateway to India, and I should know for sure come Sunday when it's usually made public by Breyer, then I'm going to try very hard to go since there's a very good chance there'll be at least one Marwari, which would be ironic since I posted on a Facebook group yesterday that I'd love the opportunity to be "turned loose" with a Marwari and my camera and now I may actually get a chance.  I guess it depends on how easily Breyer or KHP will be able to get one to have on-site for a few days 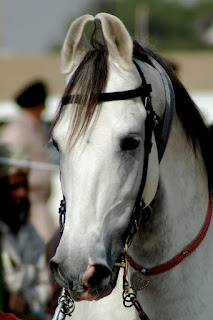 Look at those ears!  Don't ask me when or how I became enamored of this breed, but I can't resist those ears.  hahaha.  I'm torn, though.  I know quite a few people on Blab that would like to meet me in person finally and Breyerfest would be the best place to do it.  Every year they keep hoping I'll make the trek out and every year I have to disappoint us because of the flight.  So what do I do...?  Do I let them know that I'll be doing my best to make it next year or do I not say anything and then surprise them?  If I don't say anything, then they won't know if I chicken out again, but if I don't tell them, I'd hate to lose out on an opportunity to meet them because they didn't have "time for me"... this will take some thought.

An update on my awesome water bottle.  In my last post I "complained" about the plastic ring that keeps the lid on the bottle because it doesn't lay flat when you take the lid off, but rather sticks out straight.  So, I cut the connecting piece off.  But then I didn't have any convenient way of carrying it.  Oh wait!  I know!  Maybe the lid on the Hydro Flask is the same as the lid on the Klear Bottle and it'll fit.  So I brought it in to work and...hurray!  It fits!

Now I just need to figure out a way to get the plastic ring off the neck of the bottle because it bugs me being there.  hahaha.

Okay, I guess that's it for now.  I hope everyone has a good weekend.