Well, last month I said I was going to attend the Longines Masters of Los Angeles...and I had every intention of doing that.  Even bought my ticket and splurged on "VIP" Seating (the cheap VIP seats lol).  Had my plane ticket, too.  And a car rented for a couple of days.  The only thing I didn't have was a hotel reserved.  But then I got to thinking.  My car's registration is due in October and while I could still afford to go after paying that, I decided it wasn't in my bank account's best interests to go.  Oh well.  Since I fly Southwest, I was able to cancel my flight and can use the ticket another time.  Getting a refund for the show was a bit more difficult.  It said to contact the show host for a refund and when I did that, I received an email back stating the tickets were non-refundable.  Okay.  But then why is there an option to request a refund on the website?  Their response was to give me a refund.  I guess I had them with that.  hahaha.  When I bought the ticket early last month, I was certain that by doing that I would be less likely to cancel the trip because I didn't want to "eat" the cost of the ticket.  Fortunately I didn't have to.  I am a bit bummed about not being able to go and I kind of wish I had decided to just go and deal with the consequences (low bank balance) later, but when you're trying to rebuild your credit, that's not always the smartest attitude to have.  Maybe I'll go next year.  Another reason I didn't really want to go anymore is because my favorite rider Beezie Madden wasn't going to be participating.  And while there's plenty of other world-class riders who are, she's the one I want to see in person the most.  I don't know why she isn't, I just know she isn't.  Maybe she's taking some time off post-Olympics.  As far as I know, Cortes C is still out of action, but she has other horses who could compete.  Oh well.

Anyway, last week Longines had a live feed of the arrival of the international horses at LAX, I believe it was.  It started at 5am and I had every intention of being up to watch it, but I just couldn't get motivated in time and I missed it.  Thank goodness for the Chronicle of the Horse and Facebook.  FB posted the video of the event and COTH posted pictures and that's where we are now.  Pictures of the horses arriving.  I tried watching the video, but I got bored.  hahaha.   Especially since the videographer started out filming between the shipping container and the closest trailer.  At 5am, all you can do is hear their hooves as they unload from the container and walk onto the trailer.  He eventually moved, though, and things got a bit more interesting.  They had several trailers lined up, side-by-side and they would unload a horse and walk him down the line, using boards between the trailers, until they got to the one on the end.  Pretty cool, I think.  And efficient.  That way they didn't have to walk down off the shipping container then back up a ramp onto the trailer and with them being mostly inside like that, they were less likely to get freaked out over the sights and sounds of a major international airport.

So, without further ado, here's some pictures of the arrival of the international horses.  All photos by Bernstein Associates for EEM 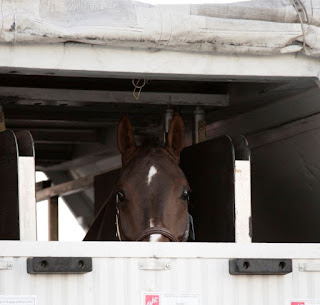 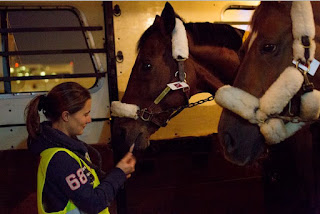 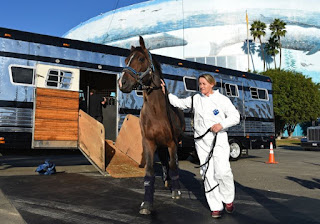 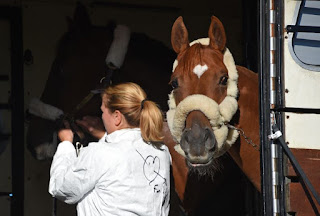 Well, I guess that's about it for now.  This morning they posted a video on Facebook of Lucy Davis and Scott Brash going out for a ride on the beach, but the horses had other ideas.  They didn't seem to like the waves that kept coming on the beach and kept spooking.  You can watch the video here https://www.facebook.com/longinesmasters/?hc_ref=NEWSFEED  I don't know how to link it better or include it in my blog post, but it's about 5 minutes long so I won't force it upon you.  hahaha.  I think it was some kind of publicity thing because there were a lot of photographers there.  I don't kow.

Our weather is starting to "cool down".  I think we're done with triple degree temperatures for the season.  Thank goodness.  We've had some minor storms the past couple of nights.  Nothing major and it's drying up by morning.

I hope you all have a good weekend.
Posted by Brenda at 12:50 PM