Convenience vs Efficience... and other stuff...

When my parents still lived up north, before my dad died, my mom would go grocery shopping mostly at Super Walmart.  Partly because they were more convenient since they had more than just groceries, but also because their town only had Safeway and Bashas' as alternatives for grocery shopping.  At one time they had an IGA, but that closed not long after Walmart became Super Walmart.  Anyway, when my mom moved in with us, it was her intention to continue shopping at Walmart.  It's what she was used to and I didn't really care one way or another so I went along with it.  Unfortunately, that often meant going to TWO grocery stores every week.  My brother is very Anti-Walmart so certain things we would have to buy at the grocery store such as steaks and roasts.  Walmart doesn't have very good choices for those anyway, but any other meat was fine and since they now carry bone in chicken breasts, we no longer had to make a trip to the grocery store if that was all we needed from the shopping list.  Before she moved in, we just ate whatever, whenever.  A couple of roommates had tried to get the house on a menu thing with a "pot" for grocery money, but it never happened.  I wouldn't have minded so much when John lived with us because he was a good cook, but eventually he get a girlfriend and moved in with her and eventually they got married.  Scott didn't eat much dinner at home and Doug...well, Doug was just gross and I didn't want to eat anything he cooked because ne never washed his hands after using the bathroom.  My mom was used to cooking dinner every night for her and my dad and we wanted the transition to go as smoothly as possible so we started planning out a menu on Saturday and go shopping on Sunday.  We did that for nearly 5 years.  Walmart first and then either Frys or Albertsons.  We used to sometimes go to Bashas because my mom liked them in Payson, but our closest store is 3 or 4 miles away and they stopped putting sales circulars into newspapers that delivered to our neighborhood and she got tired of looking at the sales on my tablet so we just stopped going.

On occasion, we wouldn't need to go to either Walmart or a regular store, just one or the other and gradually, that became more and more frequent.  In fact, I think it's been almost a month since we've been to Walmart.  Each week we decide if we need to go to Walmart and if we do, then we determine if we can get away with going JUST to Walmart.  If we don't need to go, I push for going to just one regular grocery store.  So far it's worked, but if it happens that both stores have super awesome sales, we can go to both.  Fortunately, though, one store will have better sales over another or their sales will be for more "useable" items.  In other words, stuff we actually need rather than just because it's a good sale.  A drawback to not going to Walmart as often, though, is not having access to a better selection of lesser-expensive dog treats.  Our dogs get a variety of treats and the grocery stores don't really have much of a selection and what they do have is on the more expensive side.  But my mom doesn't want to go to Walmart just to get dog treats.  Well, enter the new grocery pick-up service and the purpose of this blog post.  All you need to do is go on Walmart.com and basically shop the virtual aisles for what you want.  You can also put an item name in the search box and it'll come up with the exact item or what it considers to be close enough.  Once you have everything selected that you want, you choose a pick-up time.  They call you 15 minutes before your hour-long window to let you know your order is ready and you go to the designated area at the store, call the number to let them know you're there, then they bring the stuff out to you and load it into your car.  How great can that be?  I despise going to a grocery store in the middle of the week, but if I don't have to actually go IN the store, I could handle that.  So, there we have the 'convenience' part.  So, on Tuesday I did my shopping and selected my time frame for pick-up.  They called me at 2.45pm to let me know it was ready and I said I'd be there about 3.15pm to pick it up.  Great.  I get to the store at just about exactly 3.15pm and park in the designated spot.  There's a sign on the poles with the phone number telling you to call to let them know you've arrived so I called the number.  And got an answering machine telling me what the pick-up hours are.  Huh?  I'm supposed to be here now.  Why aren't they answering the phones?  I left a message letting them know I was there for my grocery order then sat there for about 10 minutes before anyone came out and asked me if I needed anything.  Hmmm.  I'm sitting in the grocery pick-up parking spot...maybe I have an order to pick up?  I told her I was there for my order and she said she'd be back in a few minutes.  I then waited almost another 10 minutes before a different gal came out with my stuff.  She explained to me how the program worked then opened my hatchback to load the groceries. 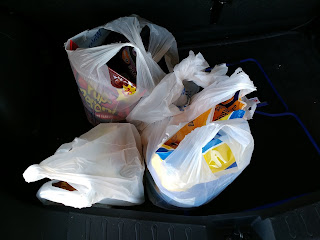 She actually asked if she should leave everything in their bags.  That question was a bit odd.  Would she actually just put them in there loose?  Maybe she thought I had my own bags to use, I don't know.  But I said yes, please.  I also got a goody bag for my first order 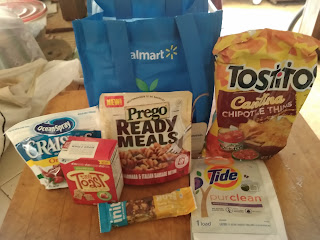 and she said I would receive a bottle of water with each pick-up.  So, would I consider this whole experience to be convenient?  I suppose.  I didn't have to go into the store, which I liked.  I'm all for convenience, as is many people in America.  Why go to a grocery store for a jug of milk when you can stop at a Circle K?  Or eggs.  Or laundry detergent.  Nowadays so many things are available at convenience stores and drug stores like Walgreens and CVS.  Is the grocery pick-up at Walmart efficient?  I'm still on the fence about that.  They didn't seem to know what was going on and I had to wait longer than what I probably should have needed to because they didn't answer the phone when I called.  I'm all for convenience, as I stated above and will usually pick that over something else, but sometimes the convenient way isn't necessarily the best way.  Sometimes you need to go with the more efficient option and maybe spend a little more money or step outside your comfort zone just a bit.  I think I need to use this service another time or two to decide if it's worth using on a regular basis for the dog treats or for things I can't get at a regular grocery store such as pre-cooked sausage patties and scrambled egg patties to make my own breakfast sandwiches.

Well, last week I had a couple of days off so I went in search of wild horses, which I often do when I'm off from work.  I saw two singletons in different areas, but none of the larger bands I'm used to.  The weather is getting nicer and the horses aren't needing to come to the watering holes as much as they need in the summer, which is a bummer, but I know they're safer when they're deeper in the desert, as evidenced by the loss of a young colt last week to a car.  The SRWHMG tried to save him, but were unable to.  Initially they held back and monitored him for signs of serious injury and they said he seemed to be improving, but then he took a turn and, well, he died.  I'm always worried when I'm out there that I'm going to witness something like that and I'll not want to ever go back.  I witnessed an incident at Sea World one time involving the Budwieser wagon and team that had me almost running to the exit and those horses survived with no serious injuries, but I almost left.  When I reached the exit plaza I decided to get a snack and settle down and decide what to do.  I had a feeling that if I left, I'd never come back so I stayed for about an hour then went back to the Hospitality Center and discovered the team had been successfully untangled and put back in the barn.  Anyway, after not having any success with the Wild Ones, I decided to just drive around and before long, I found myself behind a horse trailer so what did I do?  I followed the trailer.  Horse trailers usually lead you to horses.  Unfortunately, I lost the trailer because he turned down a side road and I didn't want him to think I was following him so I was going to try to go around the block, but I never did find him.  Oh well.  What I did find, though, was a little equestrian community I never knew existed so I just drove around the neighborhood looking for horses and taking pictures. 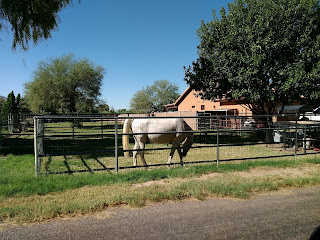 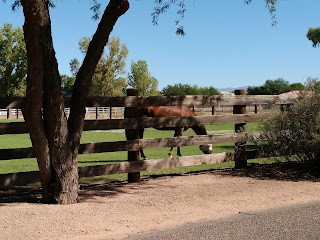 I also saw a cow or two and a couple of goats.  One dead-end led to a rather...dilapidated looking property, but they had horses... 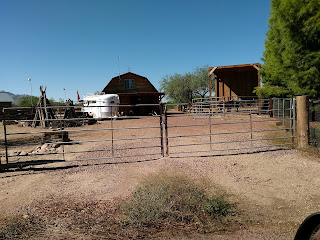 You can't really see them in the picture, but they're there.  They also had a series of riding trails, but they were kind of mish-mash and didn't really seem to lead anywhere. 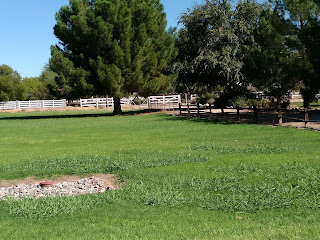 I saw some neat houses.  I like houses.  Not so much the architecture as just...I don't know how to explain it.  I like large houses.  I've always lived in "average-sized" houses that were nothing special so maybe that's why I'm drawn to the big, fancy ones 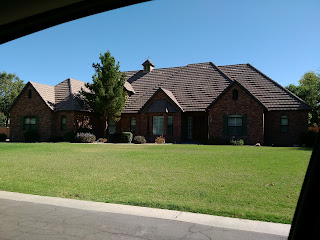 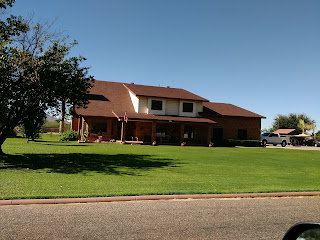 They're not even the biggest or fanciest I've seen around here, but I still liked them.  This one had a neat foot bridge leading to the front door that I really liked 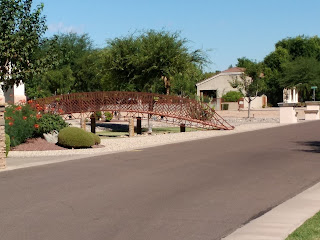 This last one made me scratch my head just a bit.  The neighborhood I was in was located in Maricopa County, but this police cruiser was from Pinal County, which is a good 45 minutes away.  I don't know if maybe the deputy lives there or what, but it certainly confused me 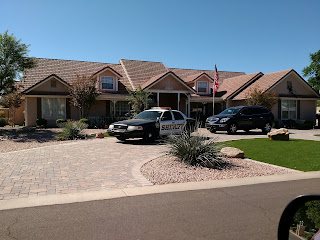 Sometimes it can be difficult taking pictures of houses without the residents freaking out, but so far nobody has asked what I'm doing there or chased me off and so far nobody has called the police to report me for suspicious activity.  hahaha.

Okay, that's it for now.  I was going to write more, but I will stop for now.  hahaha.  Have a great one!