Happy Friday, Everyone! I am so glad today is Friday. I don't have any plans for the weekend other than laundry and shopping and my mom and I will likely go out to dinner at our favorite "real" (not denny's/fast food) restaurant tomorrow night because my brother will be out of town and he doesn't like our restaurant so we only go when is out of town or at NASCAR. Today's post was originally going to be about lighthouses, but Breyer changed that. I was on Blab earlier and someone posted about the new "Big Cat Series" they just started. The first horse is Kimbia. It's on the Smarty Jones mold and is painted up to look like a King Cheetah. Sort of. It looks more like a hybrid of a regular Cheetah and a King. As you can see from the below photo, King Cheetahs have larger spots that meld together more like stripes 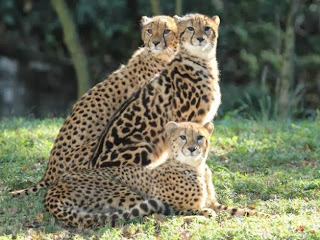 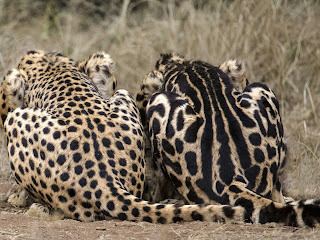 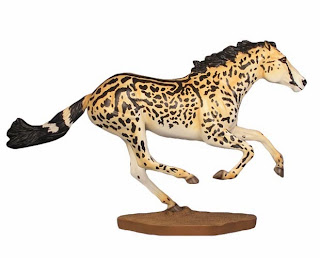 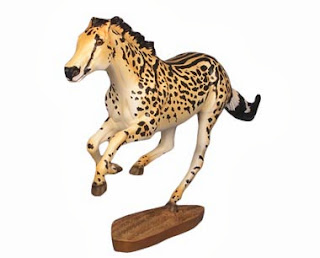 When I first saw the model I wasn't too interested, but it quickly grew on me.  I love Cheetahs and while I don't like most decorators, how can I not enter for a chance on Kimbia?  I can't really afford the model, but I have to still try.  I do have a gripe, though.  They are calling this the Big Cat Series.  Well, despite its large size, Cheetahs are NOT true big cats.   There are only 4 true big cat species: Lion, Tiger, Leopard and Jaguar.  Any other cat, despite how big it might be, are not considered big cats.  The 4 true big cat species are all from the genus Panthera and are the only cat that can roar.  Small cats like Cheetahs and Mountain Lions can purr, but not roar.  Mountain Lions make a lot of different noises, including scream, but they don't roar.  Cheetahs can make noises that might sound similar to a roar, but trust me, it's not a roar.  Tigers make a noise called a Chuff that sounds similar to a purr, but is shorter in duration and is made by blowing air through their nose.  Tigers often chuff when greeting other cats and mothers reassuring their cubs.  Captive tigers also often chuff at keepers and people they deem worthy of the greeting.  I've been chuffed at.  :)  But I digress.

So, anyway, I'm a tad annoyed that Breyer would call it a Big Cat Series and use a Cheetah as it's inaugural cat.  Oh well.  There's nothing I can do about it except roll my eyes and complain on my blog.  hahaha.

Yesterday on Blab someone posted a picture of their two Ichilay models for offers and said how different they were.  One had an arrow on its shoulder and was a lighter grey with not as noticeable of spots and the other had a red ring around it's eye, was darker grey and more pronounced "flea bites".  So I decided to look at my Ichilay to see which one I had.  I couldn't remember.  hahaha.  I have the red circle one, which oddly isn't listed on the idyourbreyer website.  I wonder why...? 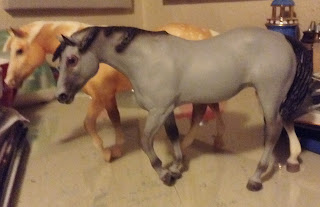 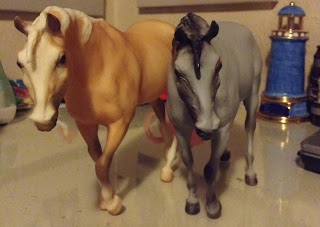 I also have Halayi from Toys R Us.  I used my iPad mini to take the pictures so Ichilay doesn't look like she has spots at all, but they're there.

Well, I guess I better get to work.  My shift started a "few" minutes ago and I haven't done anything to show for it...work-wise anyway.  hahaha.  I'm glad I work in an office, though.

Have a good weekend!