It's highway robbery, I tell you what.  Well, maybe not highway, but definitely robbery.  Or is it extortion?  Yeah, that's it.  Extortion.  We have 2 snack machines in our break room here at work...one contains cold-kept items such as "frozen" pizzas, sandwiches (not frozen lol) and milk then the other is regular snacks such as chips and chocolate.  You know.  The basic necessities to get you through the work day.  We also have a Coke machine and a Pepsi machine.  Anyway, when the company switched from Sodexho to Aramark they switched out the machines and raised the prices on EVERYTHING.  The soda machines, too.  You used to be able to get a 20oz bottle of Coke for $1.00 and now it's .85c for a 12oz can.  Really?  But that's not the worst of it.  The cold-kept machine prices remained the same, but the prices on the snack machine went up.  It now costs $1.00 for a 2pack of Reese's Peanut Butter Cups.  At WalMart, I can get a package of 8 singles for $1.00!  But this particular rant is about peanuts.  Yes, peanuts.  I was going to get some Pop Tarts to supplement my breakfast because I was still a little hungry after my bowl of cereal, but then I remembered I had boughten the last Strawberry-flavored one yesterday and all the machine has right now is Brown Sugar and Cinnamon.  No, thnak you.  So I looked at the machine and decided on a bag of peanuts.  I didn't realize it at first, not until the security guard pointed it out, but the package shrunk.  It's still 1oz, but in a smaller package.  That's fine.  But what ISN'T fine is that it costs $1.00 for that teeny tiny bag of peanuts 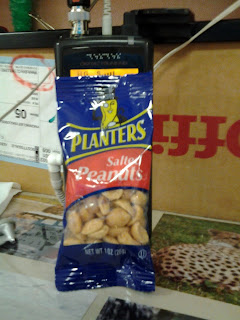 For just a little bit more I can get either WalMart brand peanuts for $3.97 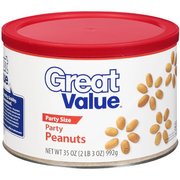 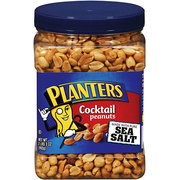 and both are 35oz containers.  That is so much a better value than the little teeny weeny package from the vending machine.  Each week I go grocery shopping and each week I tell myself I'm going to buy a can, but I have yet to do that.  Maybe this weekend.  I like sea salt and while Macadamia Nuts with Sea Salt aren't very good, I'll bet Cocktail peanuts are.

But you know what?  Even with that complaint...I GAVE MY PEANUTS AWAY!!!  Yup.  A co-worker stopped by to see how I was and I told her I was better.  This morning I had a stomach ache, but then I ate breakfast and now I feel better.  She mentioned she was starving so what did I do?  I gave her my peanuts.  Because that's just the type of person I am.

They say the temperatures are supposed to start dropping around here and by the end of the week it should be only in the upper 90s.  I can't wait for the cooler weather.  I definitely do not like living in the desert!

Blab has been down since, what, Sunday, I think?  Some hacker got in and messed it up a bit and so they've been trying to fix it.  I'm having some withdrawals, but my story-writing is benefiting for sure.  I wish it was my horse story that was benefiting, but I'm still having troubles with that one.  No, it's my whale trainer story I've been trying to write since 2005.  hahaha.

Well, back to work!