Well, after having all of last week off, which was really only an extra 3 days since we had Christmas Eve and Christmas Day off already, I am back at work today and super busy. I start at 7am and my first break is at 9:30. Usually I'm not very busy first thing in the morning, but since I'm covering for a co-worker who is out all week, I was pretty busy. Only 3 of us know how to do this particular type of work and only 2 of us are supposed to be doing it. If both of us are out then the 3rd person, who used to do it all the time, will step in and cover. I'm not complaining, mind you. I was out all last week so "T" had to cover for me. We don't get anything on Tuesdays and Wednesdays so it won't be so bad. We're also going to be down 2 more tomorrow so that'll make a total of 3 people out tomorrow and since we are a pretty small unit, that's going to "hurt". Oh well. We've been down 4 people before. We can do it. We all have Wednesday off.

I hope everyone had a nice Christmas. I think I already mentioned I got to new models. I took pictures, but I don't have my camera to upload to my computer because there's something else I want to take a picture of for a planned blog post. I enjoyed having the week off from work, but it went too quickly and I didn't get anything done that I'd planned to. I did go horse hunting on Friday, like I'd planned, but that will be another blog post.

So, over the weekend I found this group on Facebook called "As Seen Through Horses' Ears" and it's for people to post pictures taken from the saddle. The very first post on the group, the one you see Every. Single. Time. you go to the group page is about how the only allowed photos require the horse's ears in the picture. It even gives example photos of what is allowed and what isn't. Even with that at the top of the group page, there's still a lot of pictures being posted that don't show any of the horse, they're just scenic. It's annoying when people don't follow the rules of a group. Oh well. Anyway, I spent much of the weekend looking at all the pictures that had been posted. Many of them were taken in Europe, but every now and then there's one from the US and today someone posted one they'd taken last December 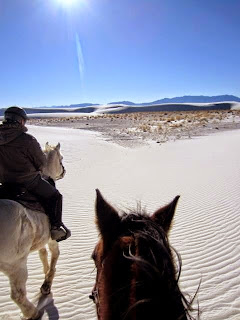 She said it was taken at White Sands, New Mexico. I didn't know you could ride there and I posted asking her how she was able to ride there. Now I feel kind of stupid because apparently, the missile range is only PART of White Sands, not the ENTIRE thing. Oh well.  Hahaha.  What can I say?  I had a friend whose parents were into hot air ballooning and she told me they did a festival at White Sands one year and the area was opened to them to be able to do it, but they had to follow all sorts of rules and stuff, which enforced my belief that White Sands was closed to the public.  Their festival actually took place on part of the missile range.  The balloons were allowed to land there but the chase vehicles had to get them out the moment they landed.  I think it would be pretty cool to go riding at White Sands, don't you? 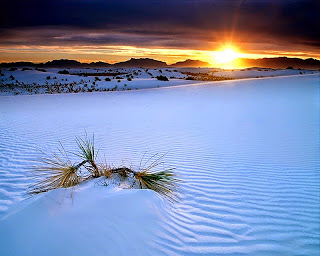 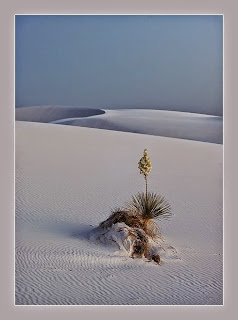 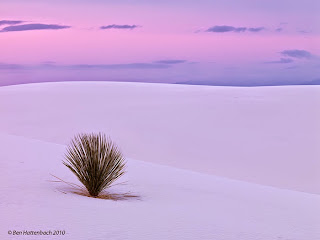 I don't guess, though, that it would be much fun for the horses.  Not in the areas with lots of sand anyway.  Maybe there's more flat areas where it would be easier for them.

Well, I guess I'd better get back to work.  Yay!  Happy Monday.