When  Breyer first announced through the 20 15 issue of JAH there would be a Collector Event in the Fall, there was lots of speculation on Blab over where collectors thought it would be and where they hoped it would be.  Since the last event, Big Easy Bash had been in New Jersey, the obvious location would have been the west coast, even though Passage to the Pacific had been in San Diego in 2012, us west coasters figured it would only be fair since they also get Breyerfest.  Well, eventually the location was announced as Chicago and after seeing the list of activities, I decided I wasn't interested in going, especially since Friday's activities included an aftenon at the Arlington racetrack.  Also, because I have never been to Chicago before, I wasn't sure I wanted to devote my entire weekend to the event because I'd want to visit the zoo, some lighthouses and maybe take that river tour.  Even if I had decided I wanted to go, it was limited to 200 people so there's no guarantee I'd even get selected in the drawing of people to attend.

Anyway, the event is going on right now and aside from some minor drama at dinner last night about seating and such, everything seems to be going well.  I believe today is when people have access to the Special Run Store.  The exclusive models were on the tables at the dinner last night along with a handout of what models are available and I gotta say, I àlmost wish I'd entered for the chance to go.  Almost.  Hahahaha.  All of these photos were taken by Blabbers... 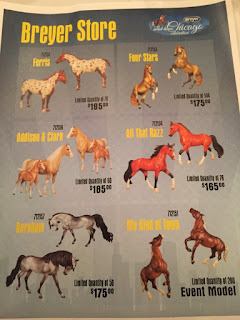 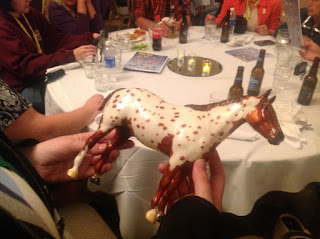 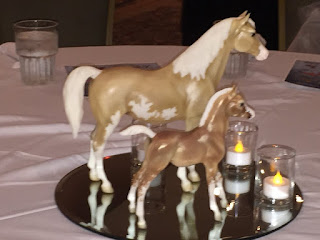 Eventually I hope to find the glossy Desatado down the road for a decent price, even at cost preferrably, but I think that one is going to be like Zydeco from BEB.  I have yet to see one go up for sale, but it looks like they increased the quantity, which is good.

In addition to the store speciaĺs, each attendee was given a special Stablemate and I was able to find one on MH $P so I have one of those coming 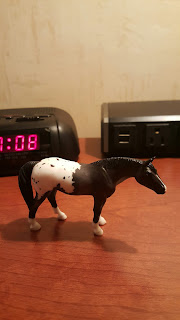 I can't wait.  He's more than I normally like to pay for an SM but I learned from BEB and Moon Pie , the prices don't always come down and if you don't get one shortly after the event, you may be waiting awhile before they show up on the market again.

Today my mom and I went to my local Breyer dealer.  The Grulla AQHA has finally started hitting the shelves and I was hoping to find one, but no such luck so I got the bay plus the tack for the Polo Pony.  I have the doll, too, so once I get it all set up I will take a picture and post it here.

Our temperatures here have still been pretty high, but they're slowwwwwly coming down.  Now it's only 457 degrees rather than 502.  Hahaha.  We've had some good storms lately, too.  I don't remember if I mentioned the one we had last Monday that knocked our power out overnight.  It also kjockey over one of our fences in back.  It wasn't a perimeter fence so there was no danger of a dog getting out, but it provided them access to a small part of yard we don't want them in because they would be able to escape from that part.  I took off Tuesday because we didn't know when power would be restored and I didn't feel comfortable leaving my mom here alone.  So we went and had my tires looked at then I took her to see the wild horses she's been hearing so much about on the news.  We didn't see any at first but as we were leaving to go check out a spot another regular told us she'd seen them at, we saw them in the parking lot.  She was quite impressed and kept saying how healthy they look.

Well, I guess that's about it for now.  I hope everyone is doing well.
Posted by Brenda at 1:57 PM