I want to go to Las Vegas!

So, every now and then I like to look at the online newspaper of different places, mostly San Diego but sometimes Las Vegas and that is what I did today.  I went to the online version of the Las Vegas Sun and saw a headline about Siegfried and Roy turning down a BOATLOAD of money to fly with 4 new Tiger cubs to the United Arab Emirates so the prince or king or whomever it is can see them in person.  S & F consider their animals to be their family so they said they aren't interested in taking their family all that distance.  Also in the article was a bit about granting a wish to a young girl through the Make A Wish Foundation.  She got to meet S&F and the 4 cubs, who were born in early August and she also got to swim with the dolphins.  Roy Horn is looking real good and there were several pictures of Siegfried assisting him. 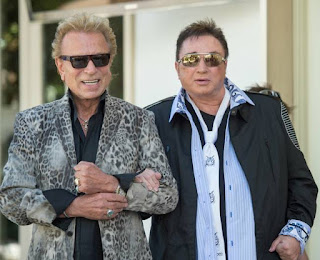 Of course, it may have been purely for the cameras, but the fact that they still live together and work together...I'd like to think it has more to do with a deep freindship and not the cameras.  Last I heard, they were no longer together as a couple, but they still are around each other all the time.  It warms my heart to see pictures like above because it shows that they are still dedicated to each other, regardless of what that relationship might be.

But I'm wanting to talk about the kitties.  I don't know if they were born of the S&F cats or if they got them from a facility in Florida (I hope not, considering their age...they should still be with mom), but I was surprised to see that each one is a different color. 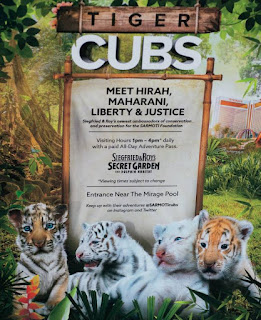 From left to right you have the standard Orange, a regular (striped) white tiger, a stripeless white tiger and a golden tiger.  I wonder how often that happens...I don't think I've ever seen it before.  I know I've seen both standard orange and striped white in a litter, but not all 4 variations.  What I find "funny" is on the announcement board it mentions conservation...maybe in the form of the striped orange, but to get the white color and the golden color you have to breed close relatives that carry the gene.   I may have found an article that points to S&F's stripeless white female as the mother and if that is the case then her parents were brother and sister.  Oftentimes when you inbreed like that, the white cubs end up with birth defects, but these cubs look to be normal.  The last time I was there they had a sibling pair of striped white cubs and both had slightly crossed eyes.  But I don't want to get into the morality and ethics of inbreeding.  If you look at some horse geneology, you will see the same name on both sides of the tree so it's not something that is unique to tigers, but usually by the time it gets down to the "current" horse, the blood relation is likely mostly non-existent but you sometimes see or hear someone who will say their horse is by So and So on both sides or is a double So and So and they're proud of that.  But again, it's likely acceptable because the relation is several generations past.

Anyway, I want to go and see the new babies and, more specifically, the golden tiger.  I've never seen one in person before because, until the birth of this litter, the closest one to Arizona lives in Washington.  They just aren't that common. 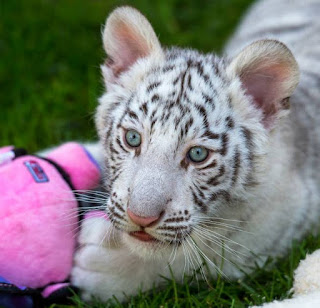 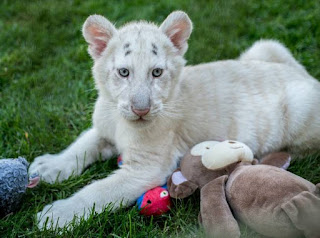 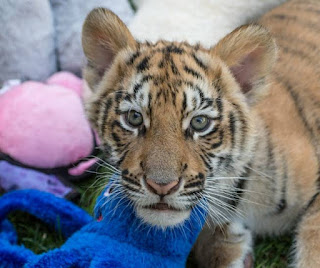 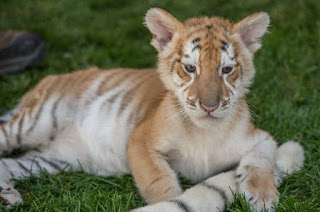 So, I'm trying to figure out the money to see if I can swing an overnighter. I have a flight credit that would take up most of the flight cost and I can get a discount at a hotel. I could probably drive there for cheaper, but I don't want to do that. hahaha. Of course, as the time gets closer to when I'm looking at going, I'm sure I'll change my mind several more times. hahaha


Our weather is finally starting to cool off.  Mostly in the morning when I'm leaving for work, but I think we are finally out of the triple digits for the year.  It's supposed to get up to 90 in a couple of days, but I'll take that over 115 any day.  I think the hottest it got this summer was 119.  Yikes!

I hope everyone has a good weekend!