Why, oh why did I have to look at the Design A Horse thread on Blab?  I don't even have one yet...he's being made...so I don't look at the thread very often.  Today I should NOT have looked because they have a new color that would look so awesome on a short mane/tail ISH but I don't have the money, dang it!

The color is called Champagne and I love it! 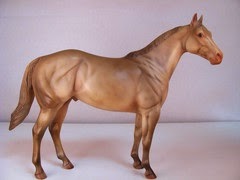 Isn't it just beautiful?  But alas, I'm broke.  I'm broker than broke.  I have tried getting my mom to buy him for me but she's not budging.   Oh well.  Hopefully they will offer the color again in the future when I have the money.  She's been having to spend enough of her money lately because of my current money situation, but there's a light at the end of the tunnel. I get paid next week and things should be back to normal for me.  I hope so because I hate not having money.

It's kind of funny, though.  I am 43 and buying plastic ponies while there's an 18 year old I sort of know whose parents just dropped a bundle on a horse for her for a potential trip to the Pan American Games in 2015.  She's also living in Germany for the summer, training.  Usually she's in San Diego training with Steffens Peters. 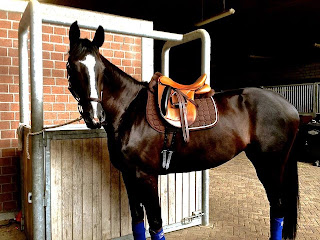 I'm 43, have a full time job and get plastic horses.  She's 18 and gets real ones.  Something is wrong with that picture.  Of course, if my dad was a famous (more like infamous) former NHL player I might get expensive horses, too.  I wonder if he'd consider adopting me...I'm only 3 months younger than him.  Maybe he could adopt me as his sister...hahahaha