I like Koalas.  They're not my absolute favorite animal, but I like them.  I've always thought they were neat, but didn't really start "considering" them until my zoo hosted a brother/sister pair from the San Diego Zoo a couple of years ago.  Kobe and Sookie were only here for 5 months, but they made quite an impression on me.  I still don't know why they never came back and it's a total bummer, but for those 5 glorious months we had them.  San Diego has the largest colony of Koalas outside of Australia and their colony is constantly growing.  Yesterday I was reading their blog and there was one about a female named Tonahleah.  She was born at the zoo 4 years ago this month, but she almost didn't make it.  One of her keepers went to check on them and saw that one of their females, Nariah (also Sookie's mom), was in the "birthing position" so she left her alone to do her thing.  A little while later she went back and noticed something tiny and pink on the ground.  When Koalas are born, they're about the size of a jelly bean.  They crawl up their mom's tummy and go inside the pouch where they spend the next 6 months nursing and growing.  Well, for whatever reason Tonahleah fell to the ground instead of crawling up into the pouch.  Fortunately the keeper noticed her and the joey and her mom were rushed to the vet where it was decided they would put the joey into Nariah's pouch and hope for the best. 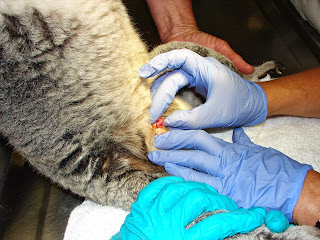 Luckily, it worked and Tonahleah has grown into a big, healthy koala, who's had 3 joeys of her own. 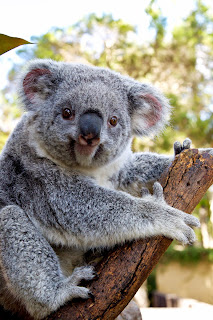 Well, in that blog where I found all this out, it was announced that she'd recently given birth.  This will be the first joey born after they moved into their new exhibit space at the zoo so the keepers are particularly excited because, I guess, it means they've settled in and are comfortable in their new surroundings.  The baby won't be visible until early 2014 so maybe, instead of going in December like I'd planned, I'll go in January or February.  We'll see.

This next part is about snakes.  If you don't like snakes then you can just go on about your business.  hahaha.  I'm not a HUGE fan of snakes.  In fact, there's really only one kind I like and that's the Cobra.  Don't ask me why because I couldn't tell you other than they fascinate me.  When I was younger I went with my family to a huge swap meet-type place called Park & Swap and my dad bought this King Cobra statue that was really neat.  Anyway, last year I went on a tour of a place in Scottsdale called the Phoenix Herpetelogical Society.  It's a rescue for reptiles.  All kinds of them from turtles/tortoises to gila monsters to all kinds of snakes to crocs and gators.  We were inside the snake room when I saw what was in one of the terrariums... 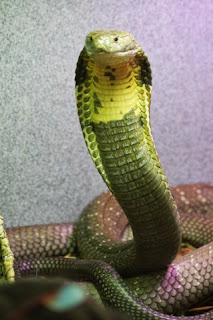 A cobra.  His name is Elvis.  What?  Can you think of a better name for a KING?  Hahaha.  This was the first time I'd ever seen a cobra in person and not only that but he had his hood spread.  He didn't seem to like all the people around.  One gal accidentally knocked into his terrarium and I saw him strike out at her.  Of course, he was behind glass so it wasn't any big deal, but it was pretty cool to see.  In addition to Cobras, I also like alligators and crocodiles and PHS has quite a few.  I didn't get to spend much time with them because it was at the end of the tour and I had to leave a little early to get to my next tour, but I did get to see some of them.  I think this is a nile crocodile 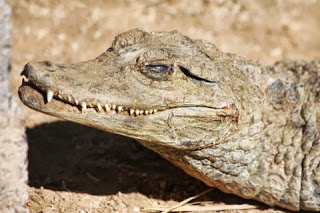 When I got home yesterday my mom told me about a story she'd seen where a photographer had his camera snatched while shooting at a crocodile farm and two months later the alligator coughed it up.  The camera was destroyed but the memory card was fine and he recovered a picture of a bunch of alligators where you can see a couple in the foreground then dozens of eyes in the distance.  My mom said all you could see was a bunch of red eyes but as you can see from the photo, that's not entirely accurate 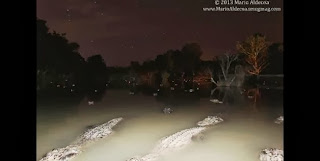 Their eyes aren't red, but they are 'shining'.  Look at them all!  It turns out the camera was missing for 8 months, not the 2 my mom thought she heard, and that the alligator didn't swallow it.  I didn't think it had since it would've known right away it wasn't something it could eat or digest.  My guess is that the gator snatched the camera and tripod after the picture was taken and realized it wasn't food and let go of it.  Somehow the camera, likely courtesy of the strap, got wrapped around his leg where it spent the next 8 months.  One of the keepers at the farm noticed the camera when the gator was out sunning himself and called the photographer he knew it belonged to and the guy got his camera back.  Pretty neat, huh?

Well, it's Friday.  Yay!  I hope everyone has a great weekend!