I actually grew up about 1/2 mile from where I live now, but in a different city.  For many years we had two riding stables close by, Welden's and Papago.  Most of the time we went to Welden's, although I'm not real sure why.  I can remember going on a trail ride for my 8th birthday and riding a horse called April.  And another time we rented horses for 2 hours and rode them to our house and even went through the drive-through window of a liquor store because my dad knew the guy who worked there, but that's not really relevant to this story.  There used to be an old-fashioned Coke machine at Welden's.  The kind that had a door you open and pull a bottle of soda out after paying your 25cents or however much it was back in the late 70s.  My mom, brother and I were watching American Pickers last night and they found a place with an old Coke machine and it reminded me that Welden's used to have one so I decided to look it up on Google.  I couldn't find one exactly how I remembered, but it was a loooooong time ago and I'm sure I'm not remembering it correctly.  Anyway, my brother asked if Welden's was the one that closed (unfortunately, many years ago) and I said yes and that Papago only did boarding now.  He thought they were closed, too, and I said they weren't.  I know they weren't because I still occasionally remembered to look when driving on the freeway that went near it.  I didn't think they did trail rides anymore because it had been a long time since I'd seen any horses out on the trails so I decided to look them up on-line and discovered that not only did they have a website, but they do actually still have trail rides from November through May 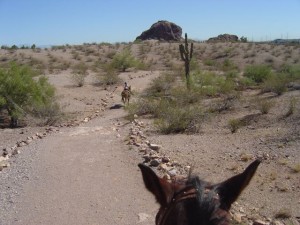 This second picture, I don't know where it was taken as it was never a part of the trail system when I road there, but it looks like a nice place to go. 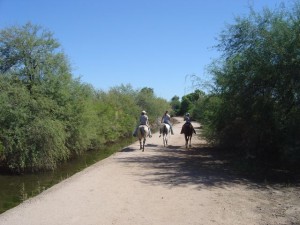 The stable is in kind of an odd place now, thanks to the opening of Tempe Town Lake and the nearby freeway.  The below picture shows a short tunnel that runs under Curry Road that connects people on the south side to the north side for equestrians, hikers and cyclists.  Although there's a traffic light not very far to the east of here, this tunnel allows them to just go under the road instead of having to go to the light. 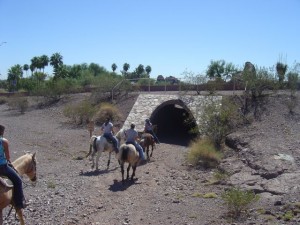 I have many fond moments of riding at Papago.  And a friend's Aunt Michelle used to board her horses there and I often went with Michelle and her two kids, whom I babysat, to the stables to care for the horses.  I also was allowed to go alone by Michelle.  And for a brief period of time I babysat the owner's grandson.  My payment?  Free riding whenever I wanted.  It didn't last long, though.  The 3 year old was a brat and the mother, who'd hired me, was a bit of a flake and would never commit to anything.  Oh well.

Papago also offers riding lessons and boarding.  Their boarding fees seem real reasonable.  For $300 a month you get a covered 12'x20' stall, twice a day feedings, once a day cleaning and bedding.  A real full-service boarding facility.  But then I remembered that the area has a drainage problem so when it rains it can get real muddy and nasty.  There's only one arena for turn-out so your horse doesn't get any exercise unless you come and put it in the round pen and let him run around.  So while it's an affordable place to board (my brother and mom both said I need to get a horse now), it's not a very practical one.  And even though they've covered the stalls, they're still out in the heat.  Yeah.  No.  I don't think I'd keep any horses there.  If I had no other choice I guess I would, but I think I'd look for other options.  hahaha.

The weather today is kind of nice.  A cool breeze.  Heavy clouds.  A little rain.  A taste of what will come in a few months once it's not so hot.  But if the sun has a chance to peek though, it's gonna get sticky!  I hate sticky.  But it was nice to drive to work with my window down.

Well, I guess I'd better get to work.  Gotta earn money to buy that horse!  hahaha. (no, I'm not gonna really buy one)
Posted by Brenda at 7:10 AM